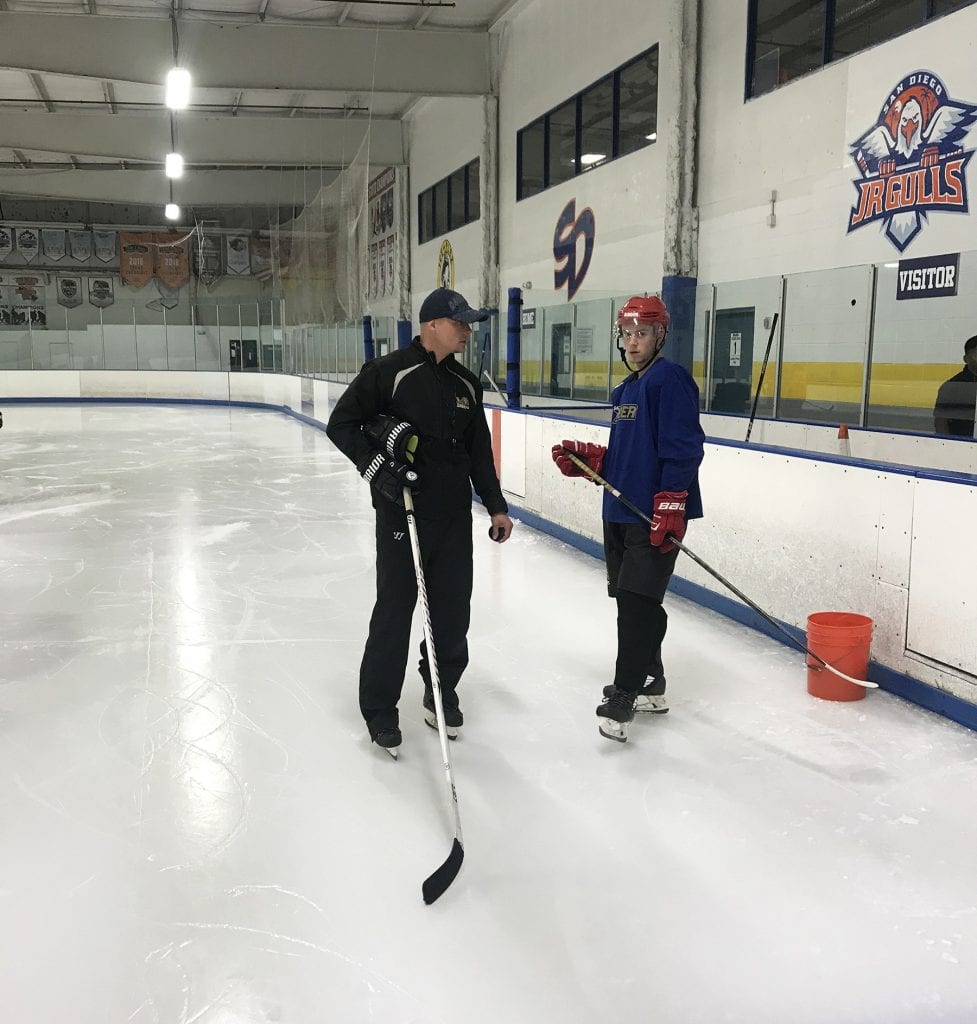 Coming into a three-game weekend set against three different opponents, objective number one for the host San Diego Sabers was to keep their recent mojo going while moving up in the standings. At the bare minimum, SD needed to cop at least two victories to ensure the fact that their season continued heading in the right direction.

Well, based on that criterion, consider what happened between Friday night and Sunday afternoon at Escondido’s Iceoplex to have been mission accomplished. With a pair of decisive wins sandwiched around a close loss, the Sabers got the job done and laid additional groundwork for what is increasingly looking like an interesting, not to mention successful campaign.

After a sluggish 2-5-0-1 start that was characterized by key injuries and a constant shuffling of personnel, the Sabers appear to have found themselves while winning seven of their last 10 contests. As a result, SD (27 points) has been ascending and now stands in third place in the five-team Western Division of the Western States Hockey League.

Head coach David Vychodil felt that it was going to be sometime around the middle or end of December before things such as chemistry, cohesion and a dependable rotation of lines and defensive parings were firmly established. When that occurred, Vychodil was confident that his club would start gaining traction and be a tough out for any opponent. But based upon recent results, perhaps the Sabers have jumped that timeline and are already poised to make the push that Vychodil envisioned.

The Sabers kicked off the weekend with a tone-setting 8-4 triumph over the Ontario Avalanche that squared the season series between the two teams at four games apiece. The Sabs wasted little time in seizing the lead with a four-goal outburst in the first period and never looked back while rolling to the victory.

The active William Baird had the biggest impact as he registered a hat trick en route to an impressive 4-point night. But fellow forwards Trevor Wittkopf and Jeremiah Serino were also huge contributors as they each lit the lamp twice. The other SD goal came off the stick of talented defenseman Benjamin Aakesson.

Bradyn Barone and Quinn Patenaude were offensive factors as well as both chipped in with a pair of assists. And in goal, Cal Hunter was steady enough as he turned aside 16 shots while posting the W.

The following night it was division leading Fresno (37 points) that came to call. Up to that point, the Sabers had gotten the best of the Monsters; having taken two out of the three previous meetings.

But thanks to a terrific 33-save performance by Maxwell Karlenzig that kept the Sabers’ attack in check, the Monsters went on to record a notable 3-1 conquest. The lone SD tally came in the final period when blueliner Dylan Travis proved to be the only Saber capable of getting the puck past the locked-in Karlenzig. In defeat, Hunter certainly showed up and gave a good account of himself with 18 stops but he simply couldn’t match the dominance displayed by his counterpart Karlenzig.

So when Sunday arrived, the Sabers knew that to make the weekend a positive one, they needed to dispatch cellar-dwelling Valencia. As a prohibitive favorite, it would have been a real bummer if SD couldn’t get the best of the struggling Flyers.

But not to worry. The Sabers came out motivated and energized while peppering Valencia’s goalie Brenden Culbertson-Bond with a whooping total of 46 shots. Seeing that much rubber caused the besieged netminder to eventually give way as the Sabs roared to a convincing 6-2 win.

Proving to be the main man, the aforementioned Wittkopf capped off a highly productive weekend by scoring thrice while also adding on an assist. The Travis boys, Dylan and Caleb, also managed to get in on the fun with a goal apiece as did Cole Rorick. And wow, did versatile backliner Joel Rothman ever author an afternoon to remember as he delivered some serious dishing while providing four helpers.

And getting a chance between the pipes, promising youngster Mikulas Pluhacek wasn’t overwhelmed by the moment and showed well while coming up with 19 saves. Pluhacek’s workmanlike effort just might have earned him some more playing time as the season begins to really heat up.

Off until December 1, the Sabers will swing back into action with an important four-game stretch against Ontario, three of which will be waged on the road. This will be another chance for the Sabs to demonstrate that they are indeed ahead of Vychodil’s schedule and poised to be a prime-time player in both the division and in the league.

There’s absolutely no denying that SD has been surging. The question is can the Sabers continue to keep it up?