Sabers’ coach Vychodil not shying away from high expectations 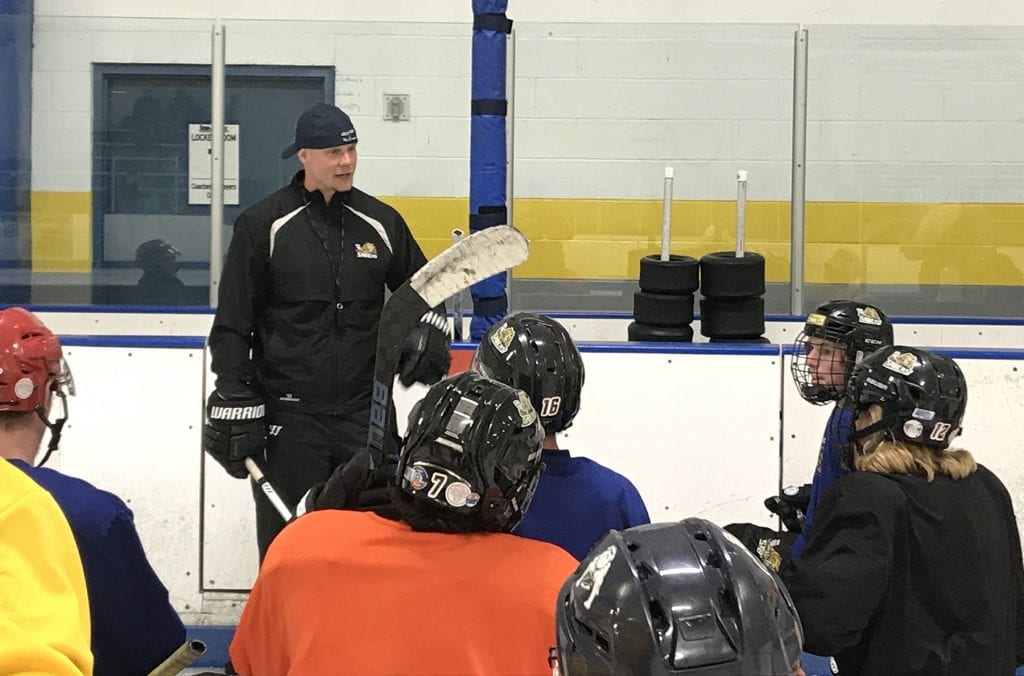 Head coach David Vychodil sees no reason why his Sabers can’t become a team to be reckoned with. Photos courtesy of the San Diego Sabers.

When you first meet San Diego Sabers coach David Vychodil, what strikes you most is the man’s physicality.

To begin with, his handshake is extremely forceful, almost vicelike. And yeah, the dude is cut. He seems almost to be bursting out of his shirt. A former 16-year hockey professional who played more than 700 games across Europe, Russia and the Unites States, Vychodil still has the look of someone who could deliver punishing body checks and do some serious damage in the corners.

What you also notice about the native Czech who grew up Ostrava is that he is the consummate straight shooter – an upfront sort who won’t mince words, play games or engage in any kind of B.S. The expression “what you see is what you get” fits him to a tee.

This direct and forthright approach leaves no room for guesswork on the part of his players. They are fully aware of where he is coming from and what he is demanding of them. “I would never go behind any player’s back,” says Vychodil. “If something needs to be said, I will say it to their face. It’s important that they know there will be consequences if the effort isn’t there or things aren’t done the right way.”

You should be made aware of something else as it pertains to Vychodil. He is a coach who thinks big and brings with him high expectations. No matter what the circumstances, he feels his team should play well, be consistent and above all else, contend for a title. “If I didn’t believe that,” he says, “then I shouldn’t be here. I should be doing something else. My job is to get us to win games and be very competitive.”

To many, the idea that the Sabers – who are based in Escondido and reside in the Western Division of the Junior Tier II Western States Hockey League – might challenge for a divisional title or something even grander, probably seems like quite a stretch.

After all, this is a team that won a meager five games just two years ago. And though last season saw notable improvement with 17 victories in 51 outings, the Sabers nonetheless finished a very distant third in the West before being dispatched rather quickly in the postseason.

In a division that is currently frontloaded with the heavyweight Las Vegas Thunderbirds and perennial contender Fresno (Monsters), it will be a tall order for the Sabs to surpass either of those talented clubs. But the persuasive Vychodil is convinced that if he can find the right mix of committed and hard-charging players, there’s no reason that San Diego can’t become a real force on the ice.

But alas, thus far this season the Sabers (3-5-1) haven’t been able to develop that chemistry and cohesion their coach is seeking, primarily due of a bevy of injuries. Because a number of players have been hurt, there has been a constant influx and outflow of personnel that has caused the team to be in constant transition with very little stability. As of this report, San Diego is currently carrying a whopping 27 players on its roster—which qualifies as a mighty hefty total.

And that makes it virtually impossible to establish any sort of continuity in either practice or games with such an unceasing shuffling going on. However, the one upside to all this fluctuation is that Vychodil is getting the chance to observe a host of players and see which ones potentially could make an impact both now and down the road.

According to the coach, a timetable of late December should be when all the pieces start coming together and the simpatico between his defense, forwards and goaltenders begins to firmly establish itself. When that happens, look for the Sabers to be the embodiment of Vychodil’s vision – a very aggressive squad that controls the puck, creates pressure, asserts itself in the neutral zone and checks with physicality all over the ice. 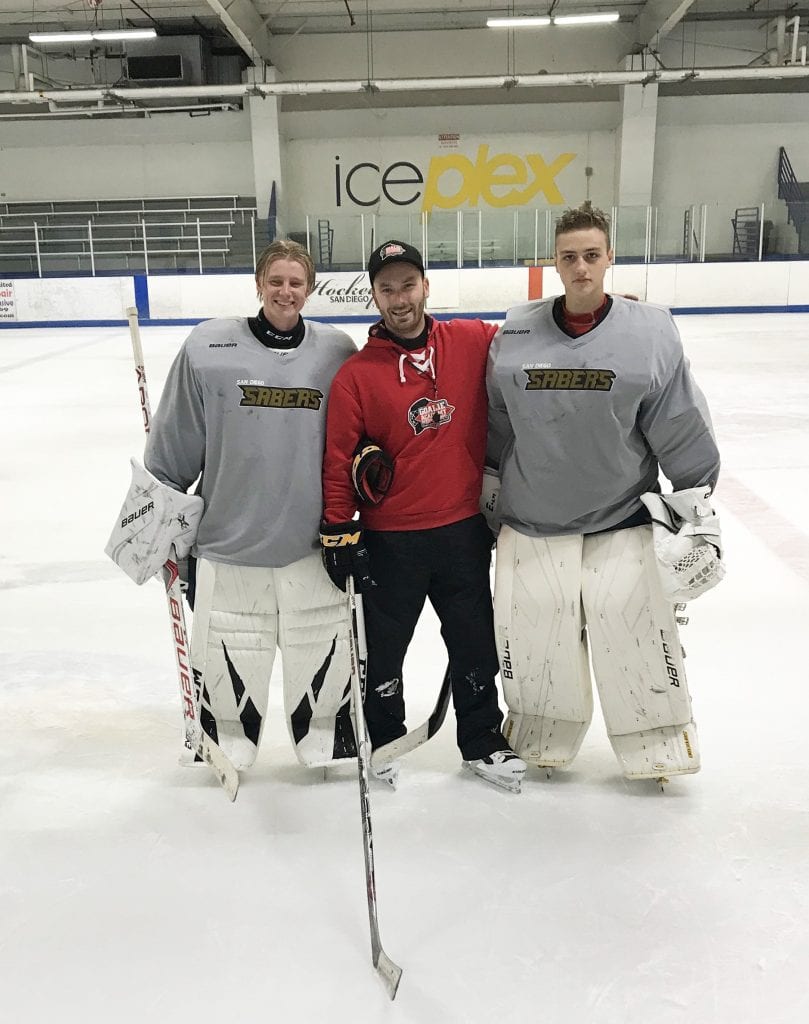 Let’s now take a look at those Sabers that Vychodil anticipates will play a prominent role in San Diego’s quest to prove that it can hang with anybody in the West and possibly beyond.

Under the close tutelage of assistant/goalie coach Frantisek Brazdil, the promising netminding duo of Ludwig Nordqvist and Cal Hunter figures to get the majority of the work though the intriguing Mikulas Pluhacek could work his way into the rotation if he shows well when given the chance.

The Swede Nordqvist is a hard worker who is considered to be a bona fide technician. A committed competitor who never gives up, Nordqvist can both handle and pass the puck. Anxious to prove himself and armed with solid overall skills, Nordqvist gives every indication that he possesses the wherewithal to be a dependable and consistent performer between the pipes.

Meanwhile, Hunter offers good size and is an excellent mover. A great kid imbued with a fighting spirit, mental toughness and a high hockey IQ, Hunter appears primed to be a real contributor to the Sabers’ cause.

As for Pluhacek, he’s a young buck who’s quick in the crease and knows how to play the angles. The question surrounding this prospect is can he develop rapidly enough to make a significant mark and earn more than occasional playing time?

When it comes to the defense, Vychodil likes to speak in terms of the collective, though he mentions Joel Rothman, Benjamin Aakesson, Hunter Howe and Bradyn Barone as being definite keys. The San Diego blueline is made up of offensive-minded players who can not only shoot the puck but also pass it with aplomb. And they’re not to shabby at the other end either, whether it’s clearly things out in front, battling in the corners or showing a little bit of muscle to the opposition.

When it comes to the forwards, there is genuine upside. Andrew Olsen is a big athlete whose skills match his size. As someone who likes to drive to the net, Olsen could be a gamer if he’s able to adjust to the faster style of play that predominates in the WSHL.

The versatile Trevor Wittkopf, who’s comfortable at either center or wing, has the potential to be a go-to guy given his outstanding vision and dangerous shot.

Then there’s Samuel Kapusta, an instinctive player who doesn’t hesitate and keeps his head up. Both athletic and physical, Kapusta displays the confidence of someone who knows what he’s doing and can get the job done.

Finally, keep your eyes on the speedy Petr Teuber and the fearless Dante Hubick, whose forte is doing the invaluable dirty work that others won’t.

Once Vychodil has the desired blend of players that he wants, he is thoroughly convinced that the Sabers can start making a real name for themselves. All that needs to happen then is for his charges to go out and prove that his belief in them was right all along.