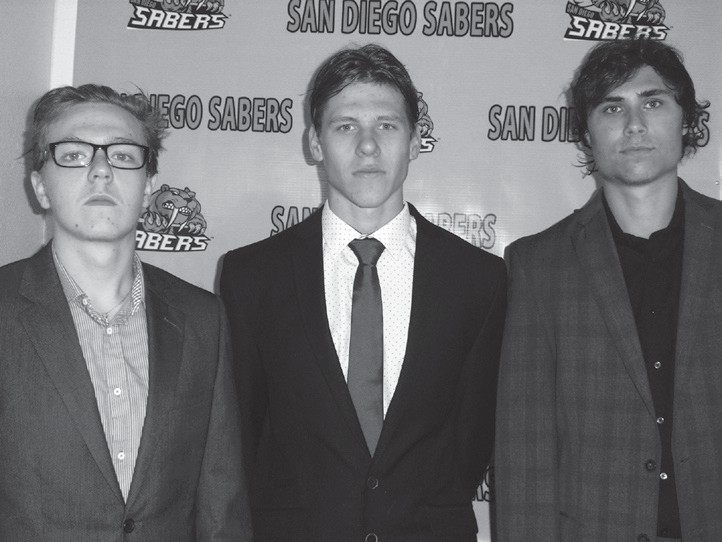 In a clear indication that they had created a new narrative and had flushed last year’s disappointing campaign, the San Diego Sabers came out roaring this season by winning five of their first six games, all of which were contested on the road.

So when the Sabers returned home to the Escondido Iceoplex for their opening home series against the Las Vegas Storm, hopes were high that the locals could keep their mojo going. Unfortunately, the Storm had other ideas.

Friday night, Vegas played spoiler as it parlayed two Jeffrey Morgan goals and a stunning 45-save performance by goalie Rhett Bruckner into a tight 2-1 victory over the hosts. And on the following evening, the Storm created even more turbulence with a decisive 6-1 win, thanks in large part to a pair of goals by Sam Sykes and more notable net-minding, this time coming from Brooks Dimarino (34 stops).

After such a great start, it would have been the ultimate bummer if the Sabers had returned home only to have their momentum completely snuffed out by being swept on their own ice. But this exciting, energetic team also possesses some true grit and it was on full display in Sunday’s midafternoon 6-4 triumph over the Storm.

This much-needed success was keyed by active forwards Kevin Dumont, who tallied twice, and the youthful Mason Kohn, who chipped in with a goal and a brace of assists.

By virtue of the win, the Sabers improved their overall record to 6-2-0-1 which gives them 13 points and currently has them situated in second place in the Western Division of the Western States Hockey League, trailing just pacesetting Long Beach (8-1).

During the early going in Sunday’s game, it looked like the Storm might rage yet again. Taking possession of a loose puck, the torrid Sykes fired a shot into the right corner that clearly beat San Diego goalie Matt Soldano. With barely over four minutes having been played, Vegas had jumped out on top and seemed to be in good shape to possibly make it a lost weekend for the Sabers.

But far from panicking, SD began settling down and did some forceful work on the forecheck, particularly Dumont and captain Keegan O’Brien, each of whom delivered a huge hit that had the crowd buzzing.

The Sabers also showed their resolve by killing off a two-man disadvantage. By this time, Saldano had gotten his teeth into the fray with multiple saves that were of solid quality. And the offense was starting to exert itself with Dumont barely missing on a wrister that clanked off the post. More tellingly, the flow of the play was now trending in SD’s favor.

Eventually, the Sabers got the equalizer on a sweet give-and-go between Greg Houle and Kohn. After gathering in Kohn’s nifty return feed, the 6-4 Houle buried his shot into the right side of the net besting goalie Mickell Manell and thereby leveling the count at 1-1 at the 5:05 mark.

Now on a roll, the Sabers continued to apply pressure at the offensive end and they were soon rewarded. Positioned in deep, Kohn was masterful as he tipped in a shot from the point that gave SD a lead that it would never relinquish. When the buzzer sounded ending the first 20 minutes of action, the Sabers went to the locker room with a much-deserved 2-1 advantage.

When they returned to the ice for the second period, the Sabers hadn’t cooled down in the slightest. Forward Terrell Hood used a terrific burst of speed to carry the puck along the right- side boards before sending a nice pass over to Braeden Gillmore, who promptly put it home. Less than two minutes later, Dumont got off an accurate shot that Manell just couldn’t handle. And when Steven Jackson, who was flying around all afternoon long, scored on another tip in from out front, the Sabers had tallied three goals in just 6:23 and had extended their margin to 5-1. Jackson’s goal also proved to be the end of Manell’s day as he was sent to the bench at that juncture.

The Storm were to counter briefly when Nicolas Ondrejkovic used a quick release from in tight that beat Saldano and made the score 5-2 entering the second intermission.

But then it was the impressive Dumont who shone once again. After fighting off two defenders, the 210-pounder came free on a breakaway which he neatly converted by 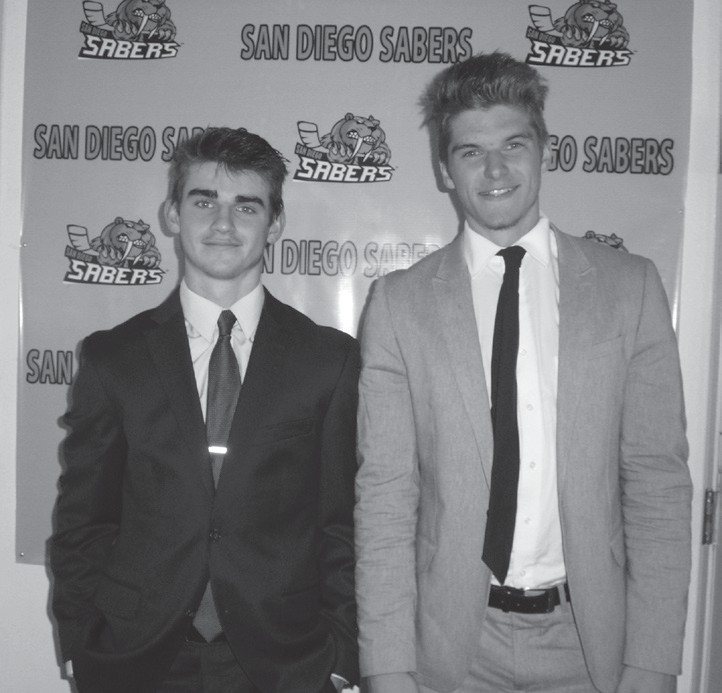 Youngster Mason Kohn (left) and the physical Kevin Dumont were the offensive stars in the Sabers 6-4 victory over the Las Vegas Storm.

flipping the puck past Bruckner, who had taken over in net for the Storm.

Now with a 6-2 advantage at the 15:42 mark of the final period, the Sabers appeared more than safe and secure. But to their credit, the Storm was far from being done. When Morgan roofed a shot over Saldano and then Sykes also went top shelf, Vegas was right back in it at 6-4 with just under ten minutes to play. At this stage, the Storm was clearly controlling play and keeping the Sabers bottled up and hemmed in.

And when the Storm’s Morgan, a truly dynamic and dangerous winger, then got a chance from short range, the local fans collectively held their breath. A goal here and Vegas would have been verging on a monumental comeback. But Saldano came up big, making perhaps the most important of his 32 saves when he got a pad on Morgan’s attempt. From that moment on, SD regained its footing defensively and neither team really threatened for the balance of the contest.

At the conclusion of the game the three stars were announced and they were in order: Kohn, Dumont and Jackson. It was hard to make a case against any of those worthy selections.

The Sabers were in real need of a team effort and they clearly got it on this Sunday. Dumont was a force with his scoring, hard-hitting and tough work in the corners. Kohn continued his spectacular early-season production with nifty passing and his nose for the net. All this from a kid not even yet 16 years of age. Houle put his ample size and multiple skills to use, contributing two points and playing with an energy that was palpable.

Jackson was a hustling scrapper for 60 minutes, putting a pair of points on the scoresheet, skating with intensity and seemingly always in the middle of things. O’Brien registered an assist and was a noticeable factor with his timely and physical checks. Gillmore demonstrated that he’s on the rise when he scored his second goal against the Storm.

And oh my, were there some blueliners who stood out. Martin Valicek was a star with his rushes, splendid puck-handling, determined work along the boards and his quarterbacking from the point. Mattias Eklund did yeoman duty as far as minutes were concerned, all the while checking with effectiveness, going aggressively to the corners and showing sublime vision with his artful passing. And just for good measure, Eklund pitched in with a helper. Dominik Ficek made his presence felt in numerous ways: shooting with accuracy, passing with aplomb, being noteworthy on the carry and holding down the fort down in low. And then there was Oskar Johansson, who contributed a helper, did some nice clearing work in his zone and was solid in virtually every phase.

Finally, Saldano deserves a tip of the hat. Though he might have worn down just a bit in the last period, having played all but ten minutes of the series against Vegas, he nonetheless was solid enough and stood his ground when it mattered most.

When asked why the Sabers have been able to get off to such a promising start, Houle was quick with an answer. “I just think we’ve got the best team chemistry in the league,” he said. “We’ve been able to play great because we’ve liked each other ever since the very first day of practice.”

Assistant coach Ross Carmichael offers his own assessment as to why the Sabers have become much more competitive as opposed to last year’s forgettable season. “Though they’re still on a learning curve, the young guys have really exceeded expectations,” informs Carmichael. “And moving forward, if that can continue and the older guys do what they’re capable of, we should be right there.”

There’s no absolutely no doubt that this team has plenty of potential. Up-tempo, very good on both the back and forecheck and with an array of talent across the board, the Sabers seem primed to make 2016-17 a memorable campaign.

Yes, this is an entertaining and enthusiastic group playing hockey at a very high level. The word needs to get out that the Sabers just might be the best sports ticket in Escondido or just about anywhere else for that matter.

And as it proved on Sunday, SD is capable of meeting the challenge when it’s under the gun. The face of this new season is already looking quite bright.