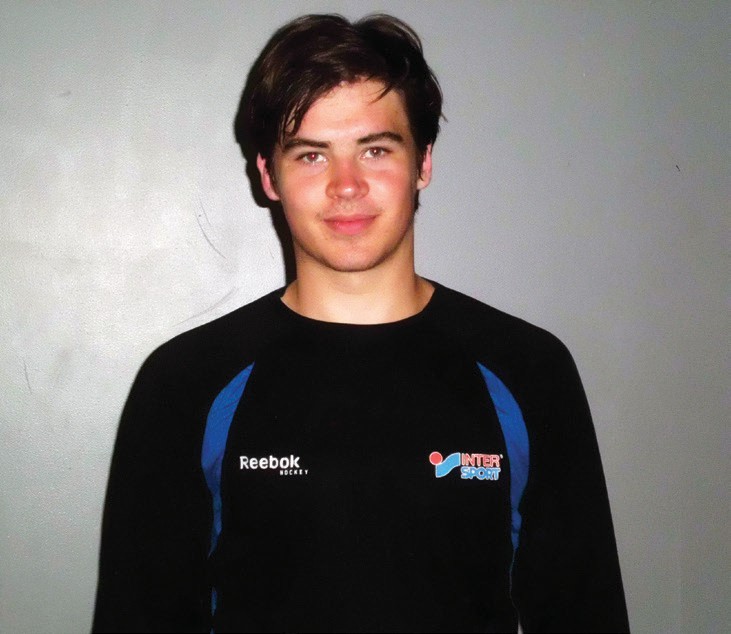 Goalie Alexander Johansson was a veritable wall on Sunday afternoon against Ontario.

For seventy minutes-plus, San Diego Saber netminder Alexander Johansson was absolutely stellar as he held down the fort, gallantly keeping his team right in the thick of things.

And from there, he handed the torch over to forwards Gregory Houle and Emanuel Guidon whose deft goals in a shootout provided the difference in a memorable 3-2 Sunday afternoon victory over the Ontario Avalanche at the Escondido Iceoplex.

To say this was a statement game for the hosts wouldn’t begin to do it justice. Without a doubt, this was one of the most important contests of the Saber season to date. Still striving to climb into the upper tier of the Western Division of the Western States Hockey League, the Sabers felt a keen sense of urgency to defeat the Avalanche, a well-regarded team that was positioned ahead of SD in the standings.

The game took on added significance because the Sabers had fallen 7-3 to titan Long Beach two nights before. It would have made for a genuine bummer if SD had come up winless over this crucial two-game weekend set.

As the regular season enters its final stretch, the Sabers needed to start proving that they could not only hang with but vanquish high-profile league frontrunners like LB, Valencia and Ontario. Getting the best of the Avalanche not only gave the Sabers some real validation but indicated what they’re capable of accomplishing moving forward.

By virtue of the two points that it earned on Sunday, SD ran its overall record to a solid 20-17-3 (43 pts) and got closer to fourth-place Las Vegas while still also staying within hailing distance of Ontario.

No matter which hockey expression you care to ascribe to Johansson’s performance – he came up big, he stood tall, he stoned the opposition – it fit him to a tee. Turning aside an amazing 56 of 58 shots and being a dynamite force through three regulation periods, two overtime sessions and into the shootout, the Swedish newcomer clearly demonstrated he possesses the capability of going into lockdown mode. “He was just incredible in net today,” praised Assistant Coach Ross Carmichael. “The rest of the guys really fed off him.”

And yet even with his brilliance, Johansson needed able-bodied assistance to see that his efforts didn’t go for naught. A quick goal courtesy of captain Keegan O’Brien and then an equalizer put home by gifted defenseman Mattias Eklund provided the Sabers with the necessary output to force the game into overtime.

With the Sabers getting the better of the play right after the opening faceoff, it didn’t take long before they had put one on the board. Just over two minutes into the fray, Tatu Kunto slid a nice pass over to a wide open O’Brien. Making no mistake, Keegan wristed the puck along the ice and into the left side of the net past goaltender Filip Subrt. It was just the sort of fast start the Sabers were looking for to send the message that they 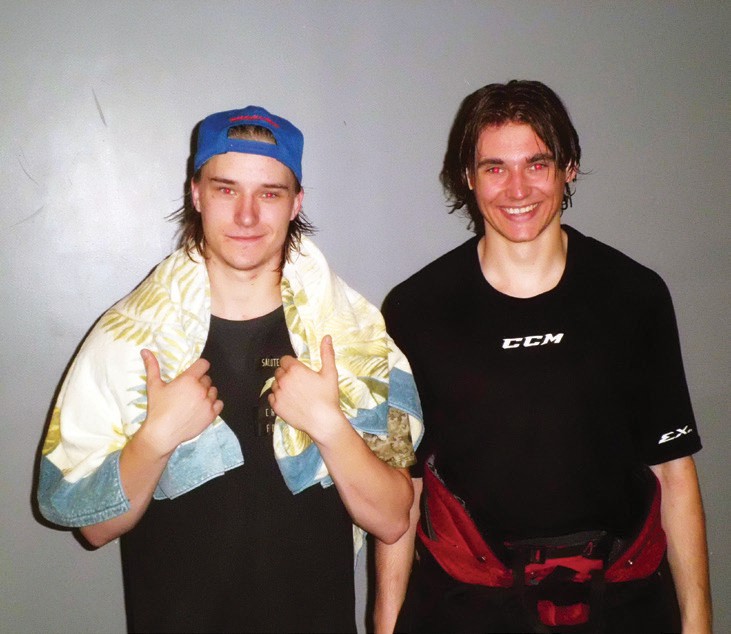 were primed and ready to defend their home ice.

But at the 14:30 mark, the Avalanche answered when defenseman Blake Duarte moved in and let go with a blast from inside the blue line. With plenty of traffic surrounding him, Johansson lost sight of the puck and wasn’t able to prevent a nifty deflection by Kolten Nelson into the upper right-hand corner. And just like that things were all knotted up at one.

Things remained that way only because the 6-foot-1, 180-pound Johansson made a huge save later in the period. Speedy winger Brendan Werstine sprinted free on a breakaway down the right side and soon was bearing down on the SD goalie. Werstine tried employing a shake-and-bake move but Johansson wasn’t fooled in the slightest and while hugging the post, made a super stop that kept things even.

Johansson’s mastery continued well into a second period that saw him repulse 21 of 22 shots. First, he robbed Nelson with a scintillating glove save from the left faceoff circle. Soon after, he was smothering Manuel Mancha’s dangerous attempt from right at the doorstep. Next came another chance from in tight by Eric Williams but again Johansson proved to be impenetrable. Then there was a blistering shot by Alex Bouchard that the SD backstop neatly turned aside.

However, just when it seemed as if Johansson couldn’t be solved, a costly turnover by a teammate undermined him. With the puck having been coughed up in the Saber zone, it soon found its way right onto the stick of Ontario forward Filip Stensson. All by his lonesome in front of Johansson, Stensson made the most of this gift by whipping the puck into the right side of the net. With 11:07 remaining in the second period, it was now the Avalanche holding down the lead at 2-1.

And yet, the Sabers immediately dug in and provided a response of their own exactly two minutes later. With the hosts enjoying a two-man advantage due to Av holding and slashing penalties, it was the opportunistic Eklund who squared things. Jumping down low after dashing in from the blue line, he was beautifully positioned to bury a rebound off a tough angle shot by hustling teammate Emanuel Guidon.

As the period wound down, Johansson put even more of his magic on display. His diving poke check deprived Reid Bosse of what would have been an almost certain goal. Not long after, he had the snakebit Williams muttering to himself with notable saves on slap and wrist shots when it was SD that was two men down.

Though the third period proved to be scoreless, Johansson nonetheless stayed busy with 19 more shots being directed his way. His shoulder save on a snap shot by Filip Ullgren that was ticketed for the top shelf was particularly noteworthy.

Because the score was deadlocked 2-2 at the end of regulation, a five-minute four-on-four overtime session was required. Though neither team seriously threatened, SD forwards Steven Jackson and Liam 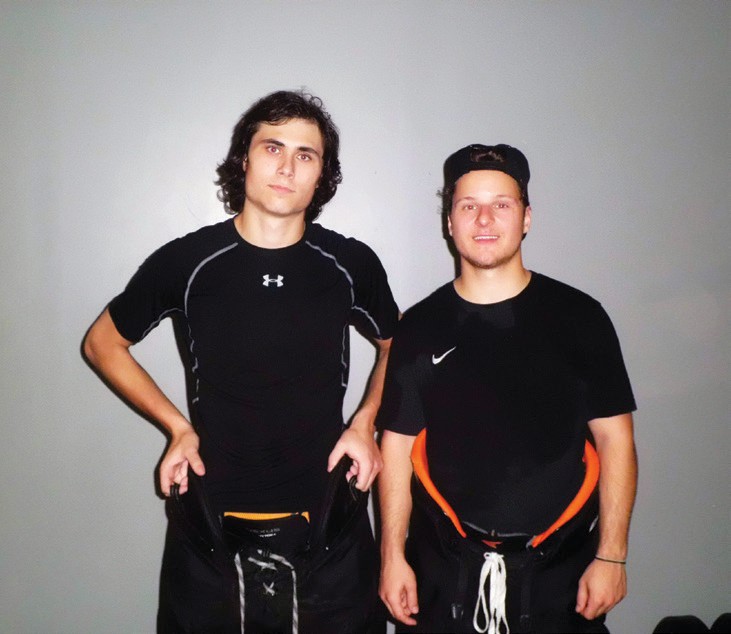 It was forwards Gregory Houle (left) and Emanuel Guidon who came through in the shootout that ultimately decided the outcome.

Now it was onto a second overtime, this one of the three-on-three variety. It was here that the Sabers’ leading scorer Kevin Dumont narrowly missed when he flipped a shot just wide. Not surprisingly, Johansson continued exerting his considerable influence over the proceedings with a pair of splendid glove saves sandwiched around a key stop off a hard slapper.

With no resolution having been reached, the always dramatic shootout was necessary to finally determine an outcome. Eklund led off for the Sabers but he couldn’t put his attempt on net. Next it was Ontario’s Joseph Aguirre’s turn and he made a sweet maneuver that forced Johansson down to the ice. Aguirre then smoothly transitioned to his backhand and seemed to have Johansson beat but the acrobatic Swede stretched out his right pad and made what can only be described as an unworldly save. With this scintillating stop, Johansson had given his team a huge lift and kept them right in the hunt.

And it was at this stage that thanks to the clutch Gregory Houle, the Sabers were at last able to take control. As Houle approached Subrt, he enticed the Av goalie to go down with a textbook deke. And when presented with a wide open cage, the 19-year-old forward calmly executed a backhand flip that found the back of the net. By coming through at this critical moment, Houle had started the ball rolling towards an inevitable Saber win.

But there was still work left to do. Johansson would be called upon to do his thing one more time when he stood his ground and denied Stensson with a decisive stick save.

Now it was time for the Switzerland native Emanuel Guidon to apply the capper. Presented with the chance to put things away and send the local fans home with an entertaining win, Guidon patiently waited Subrt out before smoothly sliding the puck underneath the beaten netminder. And with that, the joyful Guidon smoothly turned up ice and soon was celebrating with his pumped up teammates. The Sabers’ hard work and tenacity had resulted in arguably their biggest win of the season.

The significance of the victory wasn’t lost on assistant Carmichael. “This was a playoff-like atmosphere and the guys really came through,” he said. He then added his perspective on the Sabers as a whole. “This is a young team that can bring energy, is getting a lot smarter and has the physical skills to compete. I think we can make a strong run from here on out.”

Based on what they showed Sunday against a quality opponent, there’s every reason to believe that should be the case. Moreover, with an upcoming three-game weekend home series against the Phoenix Knights (7-33), a team that has struggled throughout the campaign, the Sabers are well-positioned to make some hay and move up in the standings.

And why shouldn’t they? Especially if Johansson continues to do his remarkable imitation of a human wall.