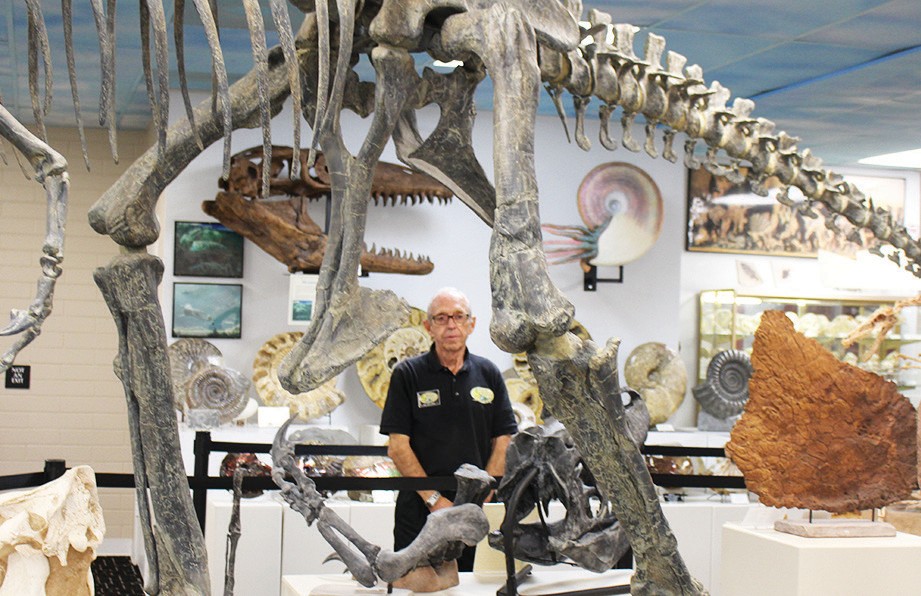 Keith Roynon of Escondido’s Roynon Museum of Earth Science and Paleontology. The museum was just named Best Museum in the San Diego area for 2016.

Escondido’s Roynon Museum of Earth Science and Paleontology was voted Best Museum in the San Diego area for 2016, according to the San Diego A-List website.

Museum Director Jeannie Nutter said winning the top spot would “let everyone know they don’t have to drive to San Diego to see the best. We’re right here in Escondido.”

“We also had a new dinosaur delivered last week. This is a fleshed out model instead of bones so the children and public can see up close what the dino looked like when living,” Nutter said, which prompted the T-A to ask, “Just where do you order a full dino? Dinos R Us?”

A commenter on sandiegoalist.cityvoter.com., Mark J. wrote, “My wife and I visited the Roynon yesterday. We went in the afternoon and had time to examine each of the displays without any distractions. We were bowled-over by the quality of the fossil specimens. Better ammonites (fossilized Mollusks, such as a nautilus) than we had seen anywhere else. More and better fossilized dinosaur eggs than anywhere else. It’s an extraordinary collection of minerals and fossils.”

Monica T. enthused, “This is such an awesome, hidden gem in Escondido. My children – 8 & 10 – enjoyed it so much. Mr. Roynon is a wealth of knowledge and his passion for this museum is evident in his amazing tours. Coming from a San Diego native, I’d say this is a must see!!”

Keith Roynon founded the museum in 2000. He began collecting rocks, minerals and fossils at the age of 6 years when discovered a shark tooth in Scott’s Valley near Santa Cruz, where he grew up. His collection formed the backbone of the museum.

He told the T-A in a feature story on March 17, “Kids love the T-Rex and Triceratops and the 25 foot long, nine foot tall Mongolian T-Rex …. There is no other museum that does what we do. We teach earth science (a core subject for many students in grades 2-3) so we are booked by a lot of school districts.”

The museum, located at 457 E. Grand Ave. is a nonprofit organization.