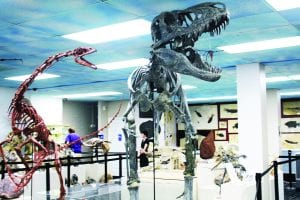 The T-Rex skeleton is one of the most popular attractions at the Roynon museum.

The Roynon Museum of Earth Sciences & Paleontology on Grand Avenue in Escondido doesn’t have any skeletons in its closets, but it has them everywhere else. And this week it is working to add three extremely rare specimens to the “Badlands Collection.”

Saturday the museum welcomed two colleagues on loan from the San Diego Natural History Museum in Balboa Park to help assemble three fossils that were discovered in the Badlands of the Dakotas. They are working with Keith Roynon, the founder of the museum, who, although turning 80 this year, doesn’t seem to be slowing down at all, or losing any of his enthusiasm for adding to the museum—which is made up largely of his personal collection from a lifetime. 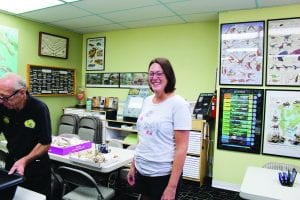 Jennifer Brennan is an educator who decided to make a midcourse correction is now “retooling for my passion job,” which involves fossils, something she has loved since she was a child.

The colleagues are Christopher Plouffe, who describes himself as a “paleontological specialist” and Jennifer Brennan, an Ocean Beach resident who will assist. She is volunteer at the Natural History Museum and her official title is as a “fossil preparer.”

An educator for a couple of decades Brennan is now attending Palomar College in pursuit of a master’s degree in geology with an emphasis in paleontology. That will allow her to “retool” her career to pursue her passion. “I’ve loved fossils since I was three,” she said. “So I might as well get paid for it.” 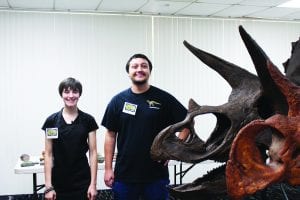 Roynon docents Emma Bellora and Don “Iguanodon” Tousley who volunteer about 12 hours a week for something that they dearly love: dinosaurs.

Plouffe described the bones as “very well preserved, but very brittle. The manner in which it fossilized makes it so fragile.” The adhesive they will use to put the bones together is basically a rubber cement, an acetone-based “superglue.”

Roynon looked with satisfaction at the spot where the three specimens will rest after the restoration work is done. “Now, with these I will have a top-notch collection from the Badlands of South Dakota!” he said. 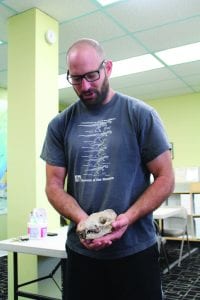 I spoke to two volunteer docents at the museum, Emma Bellora of Escondido and Don “Iguanodon” Tousley. She is a sophomore at Miramar Community College who wants to be a paleontologist, so she is studying geology and archaeology.  He is a dog trainer. I asked him if he was prepared to train the 30-million-year-old dog being assembled nearby and he quipped: “If they come to life I’ll train ‘em!”

Both volunteer 12 hours a week.

“We can always use more volunteers,” they said, and told us about another volunteer, a middle schooler who loves dinosaurs.