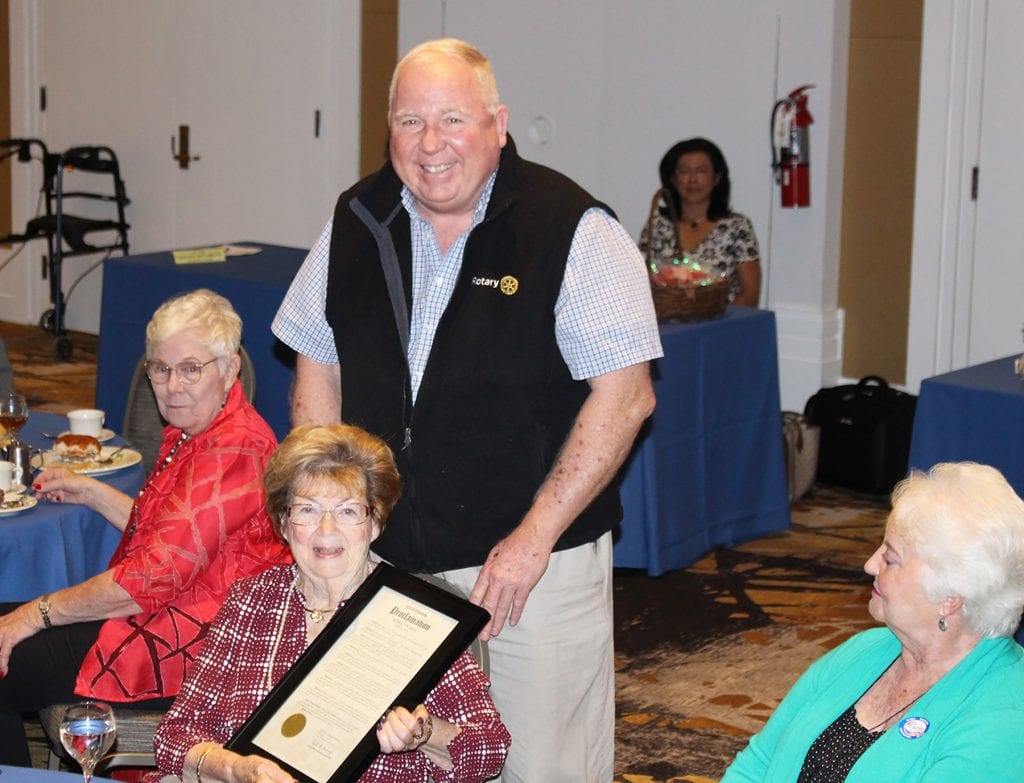 It was a recognition full of love for a woman who first joined the club in 1987. It even included the irrepressible longtime club member Irv Erdos singing “She’s our first lady” to Tom Jones’s old hit “She’s a Lady” and concluding, “That lady’s all ours!” And he did it without an orchestra!

“She was the first lady to grace the halls of Rotary as an official member,” declared Erdos.

“For thirty-three years she has paved the way,” added Rotary President Jan Jones.

Hard as it is to believe, Rotary Clubs used to be men-only clubs. For 63 years that rule was in place. Then, in 1987 the U.S. Supreme Court ruled that Rotary clubs had to admit women.  The logic was that although the First Amendment allows freedom of association, Rotary Clubs were not, strictly speaking, private clubs, but rather business and service organizations.

Shortly after that, Marilyn Mukomela was asked to join the formerly all-male organization. In the Daily Times-Advocate story from September 10, 1987, staff writer Pam Kragen wrote: “Marilyn Gilliland [Mrs. Mukomela’s first married name] says she’s anything but a ‘women’s libber,’ although she became the first woman to be inducted into the main Escondido Rotary Club Tuesday. The Escondido jewelry said joining the formerly all-men’s club was more like joining a family of friends.”

That’s because she had been a member of the club’s women’s auxiliary, which was called the “Rotary Anns” since 1964.

“She considered it an opportunity to join friends and enrich the lives of others,” reflected Erdos, and added, “Since then hundreds of other women have joined, including six club presidents.”

Many of Mrs. Mukomela’s friends attended the meeting. Besides being presented with a bouquet of flowers, she was also given a glass plaque with the words, “With Love and Infinite Thanks.”

After the glowing tribute, the honoree spokes with visible emotion:  “There hasn’t been anything in my life quite as wonderful as my time in Rotary,” she said. “Some of the sweetest things that happened to me can’t be replaced.”

Members gave her a standing ovation. 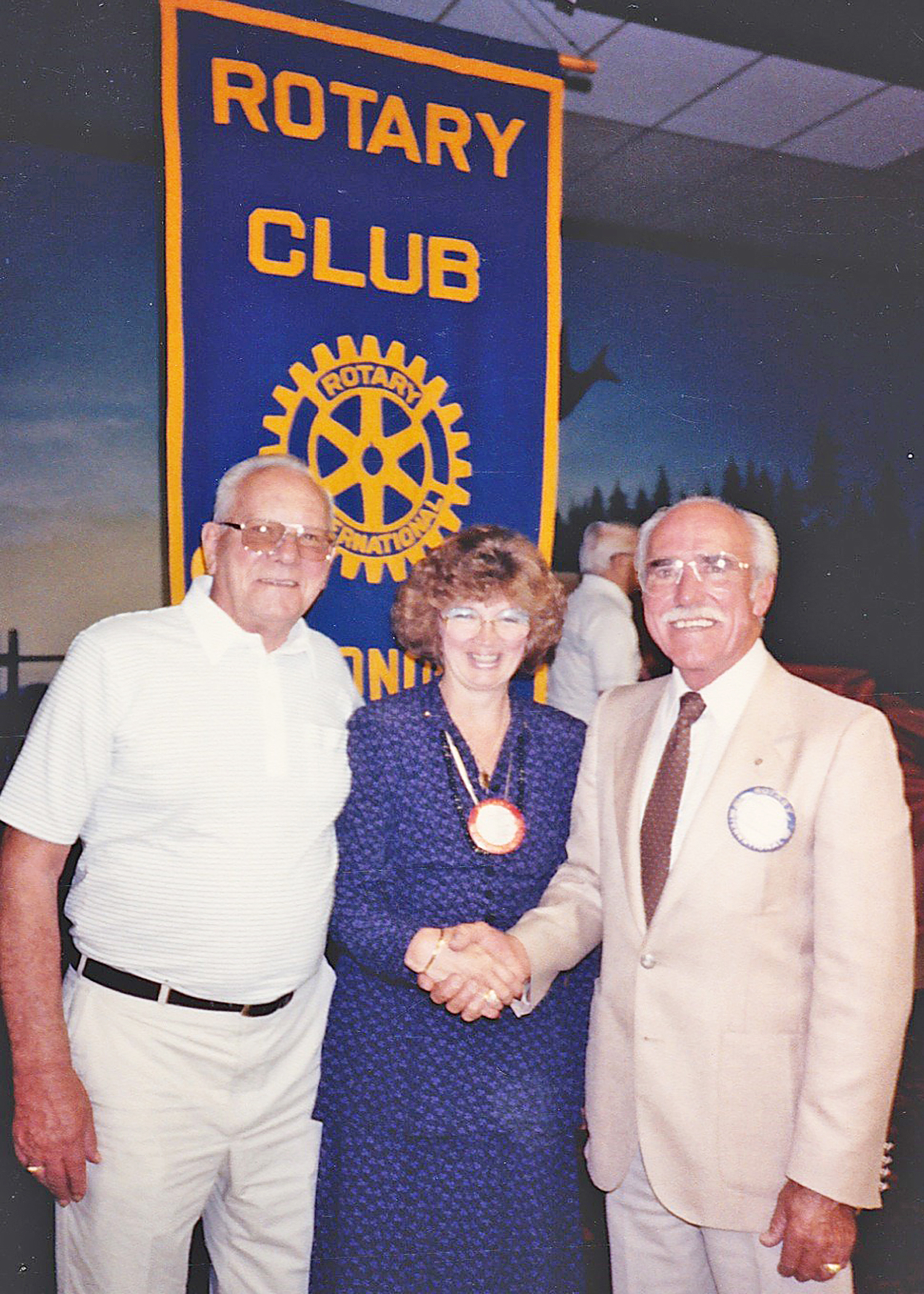 Marilyn Gilliland is welcomed as the first member of the Escondido Rotary Club. One is a photo of Marilyn on her first day, September 8, 1987, greeted (on the left) by her sponsor Al Youngstrand and then Escondido Rotary president Tom Miller. (Photo by Elmer Cameron.) 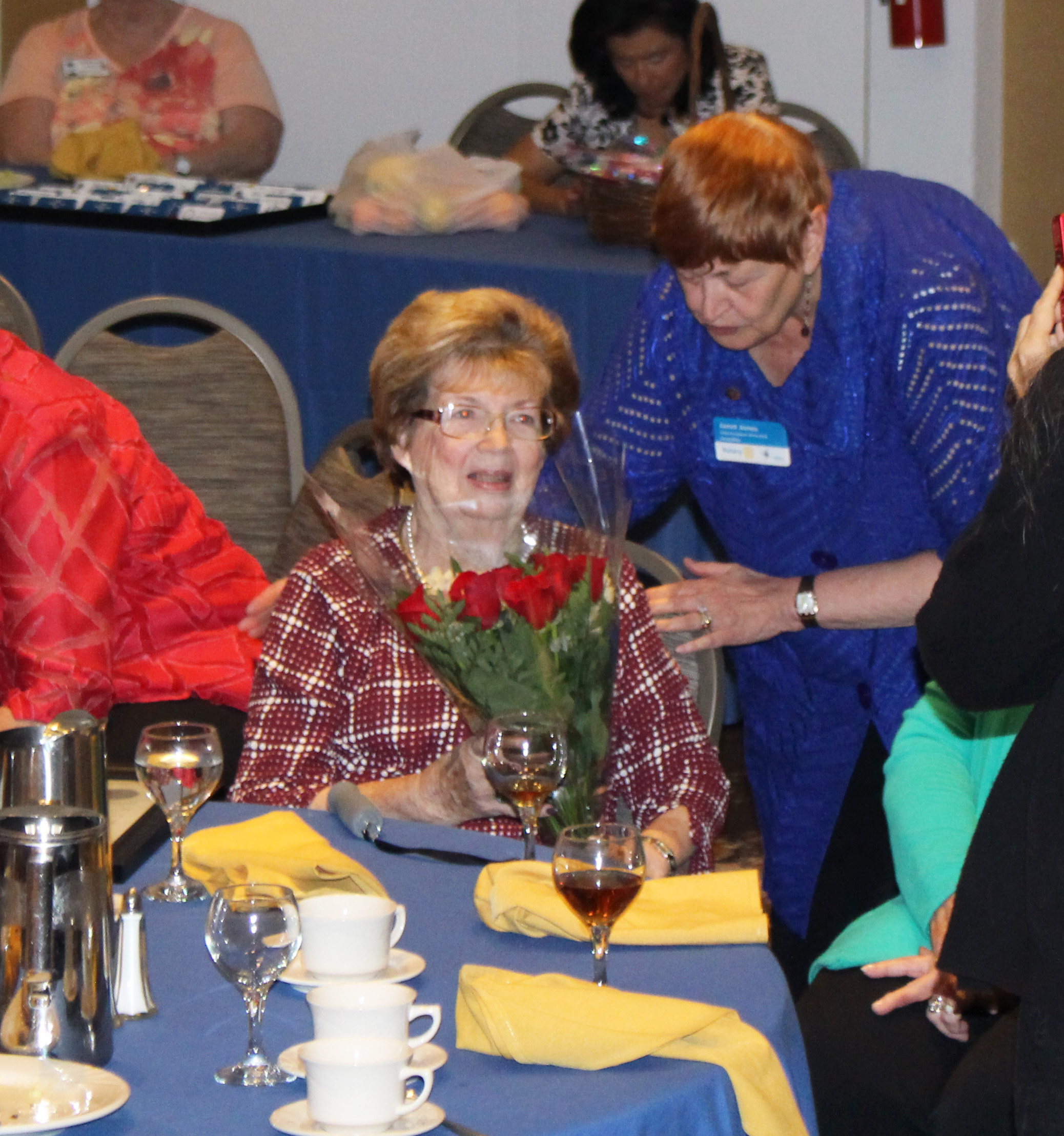 Marylyn Mukomela is presented with flowers to honor her many years with the Escondido Rotary Club.