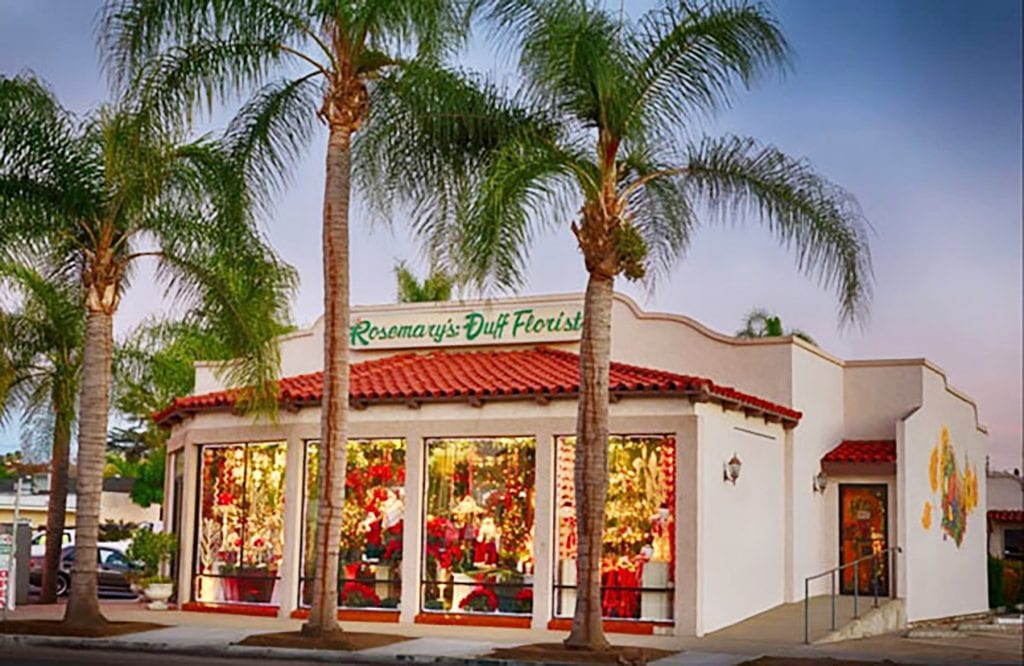 The exterior of the Rosemary-Duff Florist store, with a holiday display.

Valentine’s Day is coming. How do I know? Simple – the windows and exterior wall of this landmark business are beautifully decorated for the occasion.

Often described as Escondido’s premiere full-service flower shop, Rosemary-Duff Florist has been family owned and operated for over 40 years and has a history dating back to the early 1900’s.

Georgina Addison Stowe started Duff Gardens Flower shop in 1915. Dear friends of Mrs. Stowe owned an estate with beautiful gardens in England that was known as Duff Gardens. That became the namesake for her new business.

Mrs. Stowe grew her own flowers on site—which was located where Lincoln School is now found. Around 1918 the shop was moved to the Eagle Building in downtown Escondido on Grand Avenue. At that time the Eagle building was two stories and housed her shop, a dancing hall, and a grocery store with a few other businesses. That building was later torn down and replaced and now houses Coast Sewing & Vacuum. 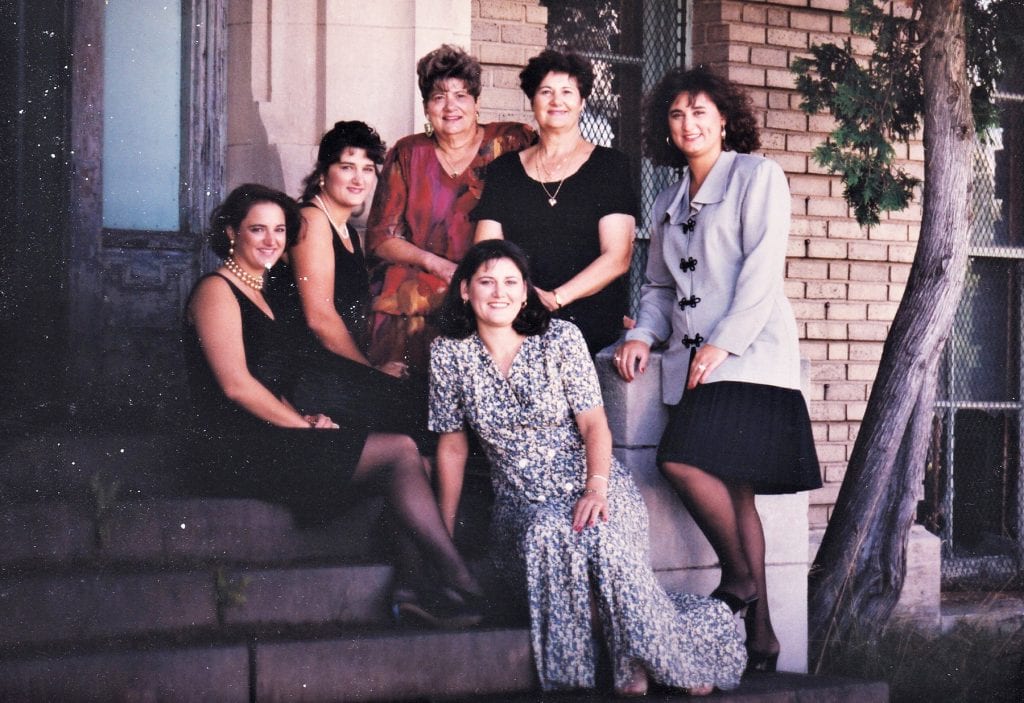 Pete & Dolly Santrach and their two children moved from Minnesota to California in 1956. Pete was a Marine at Camp Lejeune until sent to Camp Pendleton. Pete left the service and over the years worked as an administrator for the Escondido school districts, for groups of doctors and for Baker Enterprises. Pete & Dolly had six more children in California. Four boys and four girls and now 16 grandchildren and one great grandchild.

Dolly’s sister Rosemary Gornick learned the techniques of the floral business from a school in Cleveland, Ohio and opened her floral business in her hometown of Chisholm, Minnesota. In 1957 she moved to California (following her sister) and worked for Casa De Las Florist in Del Mar for many years and for Bob Socin and Duff Gardens before starting Rosemary’s Floral on Grand Avenue in downtown Escondido in 1974.

Duff Gardens and Rosemary’s Floral merged in 1982 and built the Spanish style building where the business resides today.

Today the business has four partners: Mary Ann Santrach, Rozanne Reguly, Luanne Csonka and Joanne Santrach. The sisters/nieces bought the business from their parents, Pete and Dolly and aunt, Rosemary in 1988.

Mary Ann’s specialty is floral design. She says planning is important. “Ordering for a holiday like Valentine’s Day requires placing an order for roses by mid-January if not earlier to reserve the product desired. That can be up to 2,500 red roses alone!” she said.

Rozanne Reguly is the primary decorator for the window displays and a floral designer. 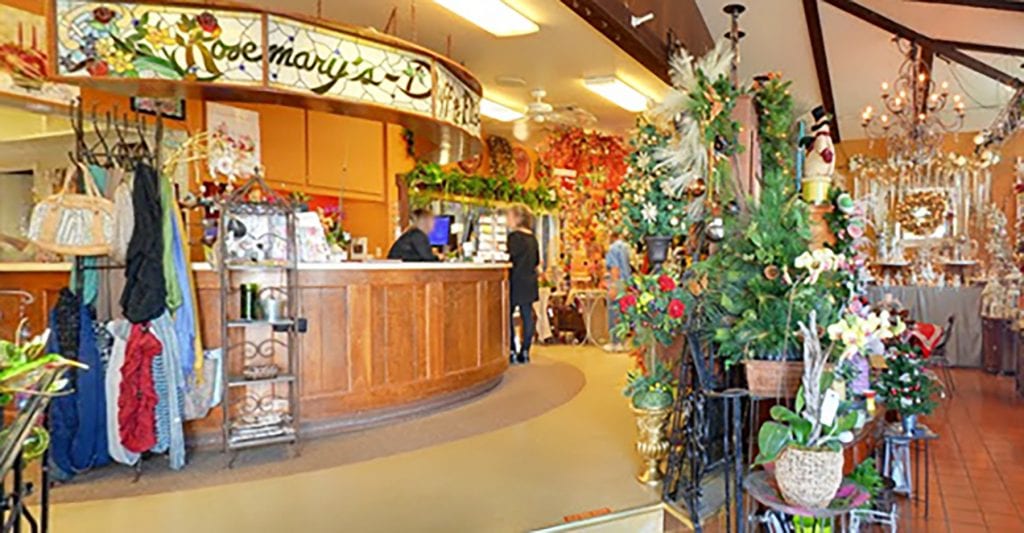 The interior of Rosemary-Duff Florist.

Luanne Csonka is the managing partner. She says, “It has been said that floral arrangements were the only gift item besides pizza that you could have made and delivered – all in the same day!  Our business is unique, sending floral gifts to express one’s emotions from happy occasions like birthdays to condolences for the loss of loved ones.”

The sisters credit much of their success to Aunt Rosemary for sharing with them the techniques she leaned from floral school and her years of experience.

Remember Bob Socin? I can think of no greater testimony than praise from the former business owner. Mary Ann says that nearly every day Bob will stop by the shop to say hello.

Rosemary Duff Florist has designed florals for many weddings, events and special occasions throughout San Diego and designed florals for celebrities Oprah Winfrey, Barbara Streisand and Martha Stewart. “But we most appreciate our long standing, wonderful clients who have believed in us for over forty years!” says Luanne.

Here is a Valentine’s Day tip for you – Go to Rosemary Duff Florist. Have your photo taken in front of the Valentine’s Day mural and boom, instant Valentine’s Day card for your sweetheart! You’re Welcome. Oh, and stop in the shop, you’ll be glad you did. 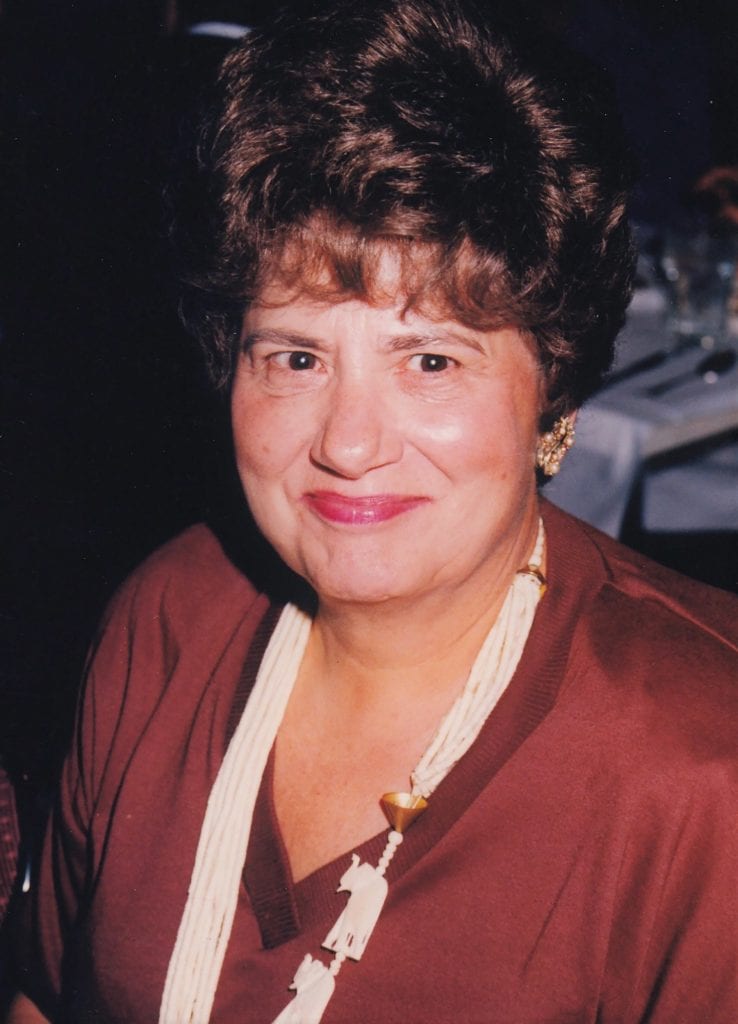 Rosemary Gornick, who started Rosemary’s Floral on Grand Avenue in the 1970s.

One response to “Rosemary-Duff Florist: a landmark business”