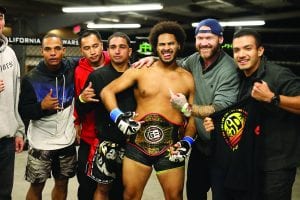 A beaming James Cannon, along with his crew, shows off his championship belt. Photos by Lenny Kerbs

Participating in the November 12 California Cage Wars promotion held within an intimate pavilion on tribal land in Valley Center, Escondido-based MMA fighters Victor Rosas and James “The Loose” Cannon were looking to make defining statements about the direction of their respective careers.

In the aftermath of the impressive results that each fighter produced, it can be categorically stated that it’s full-speed ahead for both of them.

The flyweight Rosas ran his pro record to 3-1 (and a no-contest) with a relentless second-round TKO victory over veteran Miguelito Marti that ended when the referee wisely interceded as the winner was detonating a series of blows upon his overmatched opponent.

As for the ascending Cannon (6-2), he created quite the stir with his quick dismantling of the previously unbeaten Domingo “Alpha Dog” Cuero. The young heavyweight needed less than a round to force Cuero into tapping out, thereby earning a rather stunning submission. This match was also noteworthy because it came with an inaugural CCW championship belt that Cannon accepted with delight shortly after this domineering performance.

Of the two Esco locals, Rosas was the first to see action, the third of five scheduled pro bouts on the card. Victor entered the ring/cage with a cold look of determination, resolve and purpose. He exuded the vibe of a man that was on a mission, intent on taking care of business. And boy, did he ever!

The beginning of the fight saw Rosas defending against strikes from Marti and offering some of his own in exchange, the power behind his punches making the shorter man pause in surprise, creating a brief moment of opportunity.

Rosas then seized on that opening with his specialty, a charging tackle that lifted his opponent completely off the ground. Immediately thereafter, Victor forcefully slammed Marti onto the canvas. Stunned by the tackle, Marti could only try to parry and block as Rosas subjected him to a heavy bombardment, raining an artillery of elbows and punches down on his vulnerable foe.

Marti attempted to flip Rosas off him, only succeeding for an instant prior to being ensnared by a rear-naked choke from his tormentor. However, before Rosas could complete the hold, Marti was saved by the bell ringing the end to round 1.

With each fighter cleaned up, the second round was soon underway. Marti was more aggressive, looking to show an intuitive heretofore unseen. Throwing strikes along with a few feints, he tried to maneuver Rosas into a corner perhaps in hopes of delivering more telling punches. But to Rosas’s credit, he remained cool and composed even when he absorbed some legitimate body shots. 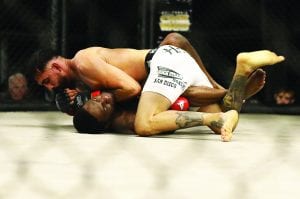 As clearly demonstrated here, flyweight Victor Rosas was totally in control during his match with Miguelito Marti. Photos by Lenny Kerbs

Overextending on a punch, Marti realized he had miscalculated and quickly covered up, bracing himself for a counter that he knew was coming. In a rather remarkable display of strength, Rosas then hoisted and tossed Marti. Landing on top of his foe, Rosas quickly postured up and landed an emphatic smash to Marti’s face, the full force of Victor’s body behind the forceful blow.

Managing to turn over and shed Rosas in a last-ditch effort to survive, Marti only succeeded in delaying the inevitable. Not long after, Rosas grabbed hold of Marti and pulled him down. From that point on it was a done deal as Rosas really brought the heat, unleashing several hooks that stunned his counterpart.

With Marti virtually defenseless, the referee was moved to call for a stop to this one-sided bout by declaring Victor, pardon the pun, the victor.

While speaking to a reporter after the match, Marti stated that as a flyweight, Rosas’s firepower is superior for a man of his stature. And in light of his standout performance, Victor got another strong endorsement from CCW owner and matchmaker Joseph Phebus. “He’s a real tough kid who’s hard to stop,” said Phebus. “He knows how to fight through pain and he’s a true professional. If he can get the right opponents in his next few fights, beat them and then get the right exposure, he can definitely move up to the next level.”

The last fight of the night was the main event that pitted aforementioned heavyweights Cannon and Cuero. This was the undoubtedly the match that many of the spectators had been anxiously anticipating for a reason to be explained forthwith.

As Cannon was first introduced and ambled his way to the cage, he was greeted by a chorus of boos as well as some lusty jeering. Conversely, when the heavily tattooed Cuero made his entrance, the reaction was the polar opposite, with the cheers and applause verging on the deafening. 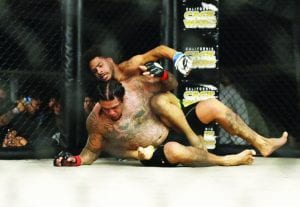 For even the casual observer, the extremes in the reception given the fighters were easy to understand. This MMA event was being held on tribal/reservation ground and since Cuero is indeed a native Indian, naturally most of the crowd’s sentiments were with him. Most of those in attendance were fervently hoping for a victory by the “Alpha Dog” that would keep his record spotless and set off a raucous celebration. But as passionate as the crowd was in backing Cuero, both it and he were about to get a lesson straight out of the school of hard knocks.

Barely a minute into round 1, Cannon wowed onlookers when he managed to lift and slam Cuero, all 265 pounds of him, into the canvas. Winded by the fall, Cuero had little time to defend himself from sledgehammer blows to the sides of his head. Now in great peril, clearly dazed and at the mercy of the assertive Cannon, Cuero could offer little resistance and soon he was tapping out in submission, the victim of a rear-naked chokehold.

Cannon, who wrestled at both the high school and collegiate levels, is the possessor of a bright future according to Phebus. “He’s getting great instruction out of a gym in Oceanside which is really helping his development,” shares the CCW majordomo. “I expect him to be a factor in this sport. He’s really fast and athletic and I think he represents a new breed in the heavyweight class.”

So all in all, it was a memorable night for the two lads that call Escondido home. They came, they saw, they conquered. Oh yeah, one other thing. They totally kicked ass!