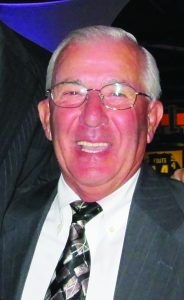 Ronald Lee Boyer of Escondido died January 3, 2017 at 75 years of age in Escondido,  surrounded by his loved ones.

Mr. Boyer was born August 29, 1941 in Tiff, Missouri to Theodore & Alice Boyer. He was raised in St. Louis Missouri, where he spent his childhood life. He was one of six siblings and is survived by one sister and two brothers.

Mr. Boyer married his beloved wife Barbara Boyer on November 9, 1963 and lived in numerous places including Florissant, Missouri, Schaumberg, Illinois before settling in Escondido in 1988.

He will always be remembered as a man of faith, love, integrity and honor who loved his family. He enjoyed spending time with family and friends.

Mr. Boyer lived a life of purpose committed to his family, his faith, and his business, Boyer Moving & Storage. A respected business man who valued and honored each employee, he created a work environment where everyone felt like family and was treated with kindness, respect and dignity.

Mr. Boyer was loved by all who knew him and will be remembered for the difference he made in all the lives he touched.

A Celebration of Life was held previously.