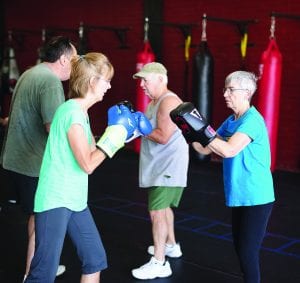 In its many forms and iterations, sports can be of enormous benefit and put to countless good uses.

But one would be hard pressed to think of a more worthwhile and inspiring use of it than what goes on with Rock Steady Boxing San Diego. Operating out of a spacious gym on Escondido’s East Valley Parkway, this program incorporates highly structured workouts designed to assist people suffering from Parkinson’s disease mitigate against its symptoms and to help them maintain a genuine quality of life.

Parkinson’s is a chronic and progressive movement disorder that can affect the afflicted in any number of insidious ways. The fundamental intent of Rock Steady Boxing is to attack the disease from a wide-ranging standpoint and to target all aspects in which it may manifest itself. Among some of the more notable people who fell victim to the illness have been boxing icon Muhammad Ali, evangelist Billy Graham, singer Johnny Cash and cartoonist Charles M. Schulz. It is estimated that nearly one million people in the United States are currently living with Parkinson’s.

The Rocky Steady program consists of two 90-minute sessions conducted five days a week. One workout runs from 9:30 a.m. until 11 while the other begins at 11:30 a.m. and concludes at 1 p.m. As of now, about 90 “fighters” (as they are affectionately called) participate in the program with the age spread ranging from 34 to 89.

Because the program has been recommended by neurologists and movement specialists familiar with it, participants come from various locations throughout San Diego County. Rudy, for example, is an 86-year-old member who makes the trek all the way up from Lemon Grove. Watching him in action and noting the effort that he puts into whatever he’s doing, there’s absolutely no doubt he feels the drive is more than worth it.

Many of those involved with the program will engage in two, three or even five workouts per week. Dedication and resolve are the bywords by which these “fighters” obviously operate.

Without question, the driving force behind Rock Steady’s genesis and growth has been a 48-year-old dynamo named Marylene Rosa Kuhlmann whose in-shape physique and becoming face make her appear considerably younger. A native of a small village just outside of Montreal, Quebec, Kuhlmann was a figure skater and a runner in her youth. 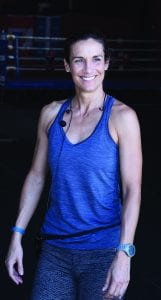 The personable and committed Marylene Rosa Kuhlmann has made Rock Steady her labor of love.

Working as a specialist in exercise therapy and as a certified personal trainer, Marylene had an epiphany while helping a patient suffering from Parkinson’s. Based on that experience, she decided to resign from her regular job at a physical therapy clinic and in 2014 elected to devote herself to nurturing and then expanding the Rock Steady program. “I just decided to quit everything else so that I could do some good for people who were dealing with this disease,” she says, her appealing accent very much in evidence. “I wanted to help them get parts of their life back.”

And after three moves to various locations, she finally hit on the Escondido locale that seems to be a perfect fit for the program and its beneficiaries. “This is their home, it’s their place,” Kuhlmann explains. “It’s a safe and comfortable environment because everyone in here is fighting the same disease.”

You watch head coach Kuhlmann interact with her “fighters” and you can’t help but be struck by the realization that here is someone who has truly found her calling. Constantly moving about to encourage and instruct the participants, she can be quite balletic when demonstrating a move or maneuver that she wants them to attempt. Moreover, she is forever upbeat, positive, smiling and energetic, someone who is totally invested in trying to improve the status of everyone under her guidance. Few people walking around today are more committed or passionate about their profession than is Kuhlmann. Rock Steady Boxing has undeniably become her labor of love.

As one would surmise given the name of the program, boxing is an integral and key component of all the workouts. Because boxing is a physically all-around pursuit that stresses such things as cardiovascular enhancement, balance, dexterity, agility and strength, it is particularly effective in helping to retard or slow down the effects of Parkinson’s. Whether toiling individually or paired off with a partner, the “fighters” can be seen jabbing, throwing one-two combinations, ducking and catching punches, delivering uppercuts, hooking to the body as well as working on their footwork.  All this activity comes under the watchful eye of boxing instructor Victor Rosas, an eminently qualified coach who just so happens to be a professional MMA fighter. Rosas is totally hands-on and fully engaged as he puts his charges through their paces. And make no mistake, there is more than sufficient punching power on display. “Some of them can really hit,” says Rosas with an approving smile.

But there is so much more to the program than just the boxing aspect of it. There is a stretching and twisting session that involves the use of a slender white bar. A particularly fun exercise involves fencing with elongated noodles normally used for swimming purposes. And then there is a nine-station rotation that features among its requirements a version of hopscotch, pushups, squats, jumping rope, work on speed and punching bags and stepping up and down on a humped disc. Before undertaking the aforementioned rota, one smirking gentleman told a bystander, “Now, the fun starts,” while another quipped wryly, “Time to release the Kraken.”

The workout culminated with the group en masse spending quality time on the mat in which stretching, twisting, shifting and turning was emphasized. 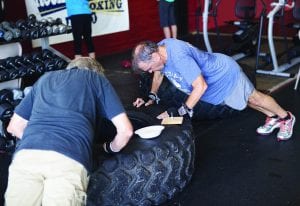 Testing pushups were part of the nine-station rotation.

Though concentration, focus and determination are clearly in abundance, the atmosphere at Rock Steady can also be light and relaxed, where the participants are allowed to get a little crazy, have fun and goof around a bit. Watching as the “fighters” interacted, it was very apparent that a genuine sense of camaraderie and respect exists among them.

Another noticeable component that adds to the enjoyment of the workouts is the foot-tapping music (a stimulant to the brain) that provides a constant background as the “fighters” do their thing. The sounds can range anywhere from such classics as “In the Mood,” “Suspicious Minds” and “Surfin’ USA” to a tune by Michael Jackson.

Some of the symptoms of Parkinson’s can be tremors of the hands, arms and legs, rigidity of the limbs and truck, postural instability, difficulty in speaking and swallowing and bradykinesia. “We’re fighting back against the disease by creating workouts with tons of movement,” Kuhlmann says. “Movement is the best medicine for Parkinson’s because if you don’t use it, you’re going to lose it. By doing this, our ‘fighters’ will keep certain skills much longer compared to those that don’t exercise.”

Should the situation arise during a workout, Kuhlmann will offer practical advice on how to address a specific symptom. For example, if someone experiences a tremor in the leg, Marylene will immediately urge them to shake it out with some forceful movement. Should a hand be the culprit, the committed coach will direct the person to make a fist and then empathically flick their fingers outward.

And getting the “fighters” to regularly use their vocal chords so that their voices remain viable is another vital aspect of the program, whether it comes in the form of some kind of countdown, shout or other audible expression. 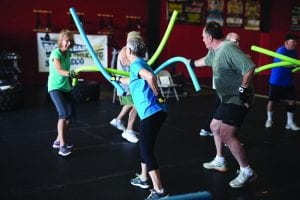 Having fun is a big part of the program as the “fighters” do some playful fencing. Photos by Lenny Kerbs

The name Rock Steady is an appropriate one for the program for a couple of very profound reasons. To begin with, its fundamental purpose is an attempt to, on many levels, rock the disease. And the steady part comes into play because that’s what the participants must be in their mindset and approach of staying active and never giving up.

When it comes to Rock Steady, it’s hard to think of the use of sport in a more meaningful or poignant way.