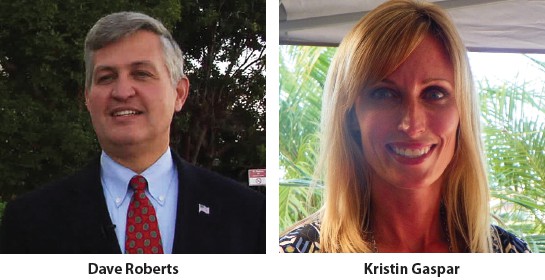 For the first time in 30 years an incumbent member of the Board of Supervisors may be unseated. The see-saw vote counting in the race between Third District Supervisor Dave Roberts, running for a second term and his challenger, Encinitas Mayor Kristin Gaspar is going down to the wire. Right now, it’s advantage Gaspar.

At this writing Gaspar was leading Roberts by 368 votes, or about 50.09% to Roberts’s 49.91%. The race is down to counting in the absentee and provisional ballots that were mailed on or before November 8 or irregularly cast on election day, but which are still rolling in and must legally be tallied.

These latest figures come from the San Diego County Registrar of Voters as of Monday night. Gaspar has 102,904 votes to 102,546 for the incumbent. Although the election is close, the trend appears to be favoring Gaspar since several days ago she was first behind by several hundred votes, then virtually even, and now ahead by nearly 300 votes.

Currently about 164,000 mail and provisional ballots throughout the county haven’t been tallied yet.

Roberts basically painted a giant target on his chest with accusations from former staffers that he mistreated members of his staff, misused county funds and had an inappropriate relationship with a staff member. Last year three former staffers filed complaints. Roberts’ cause wasn’t helped when fellow supervisors voted to pay $310,000 in claims, but gave him a public tongue lashing for his behavior.

Smelling blood, two Republicans in the slightly Democratic district: Gaspar and Escondido Mayor Sam Abed, filed to go after the only Democrat on the Board of Supervisors. Abed came in third, but since the combined vote for Abed and Gaspar was larger than what Roberts got, that set the stage for a very close election in November.