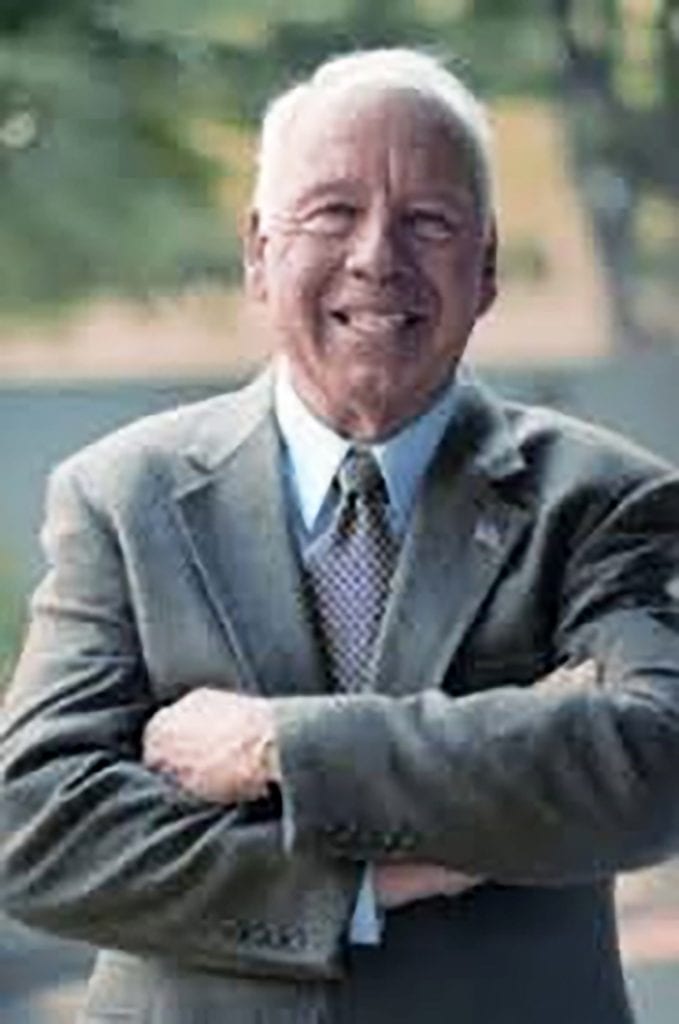 Robert “Bob” Wilson has been selected as one of nine 2019 Escondido Forever Legends by the Escondido History Center.  A Senior from a High School in Escondido will receive the FLAG (Future Legends Award Group) Award in his name and be presented a $1,000 honorarium. This award, presented in an October 9, 2019 ceremony, is made possible by the generous sponsorship of the Rincon Band of Luiseño Indians.

Robert Wilson and his twin brother were born in Escondido in a house their dad built in 1924.  Bob has modestly described himself as being just an average high school student.  In reality, Bob played Football and Track at Escondido High School. He was also a Boys League Representative, a member of the Letterman’s Club and Cougar Knights.  Bob’s classmates elected him Class President his Sophomore year, ASB Vice-President his Junior year and ASB President his Senior year,1946-1947.

Having grown up on a farm and living in an agricultural town, Bob decided to enroll at University of California Davis and become a Veterinarian.  After two years and with the Korean War in need of soldiers, Bob was drafted into the Army. Following his discharge, he transferred to UCLA and graduated with a major in Business Administration.  With the G.I. Bill available to him, he enrolled in Law School at UCLA, a three-year program.  During the first year, he was advised by UCLA to leave the program, which Bob has said was the luckiest decision ever made for him.

Bob’s formal education was now over, and in need of a job, he was hired by Coldwell Banker and Company as a real estate broker. It was during this period he met his partner Fred Duckett, and after 10 years together, they formed Duckett-Wilson Development Company of which Bob is Chairman.  For some 55 years they have developed shopping centers throughout California and Colorado.  They also founded Fish Market restaurants, a small chain operating primarily in California.

As a very successful developer and entrepreneur, Bob Wilson has used his expertise, humanity and finances to improve the lives of many people internationally, nationally and locally.  His tireless support has been given to the UCLA Dental School, UCLA Medical Center, Student Lounge, Criminal Justice Legal Foundation, Colonial Williamsburg Foundation in Virginia, Palomar College, Palomar Mountain State Park, Escondido High School Stadium, Escondido Boys and Girls Club Play Field, Escondido Charitable Foundation, Escondido History Center, Escondido Alumni Cougar Athletic Club and many others.  He has also served as Chairman of the UCLA Foundation and as Chairman of the Pauley Pavilion renovation at UCLA.

Late last year, following the Camp fire in Paradise, California, Bob favored 980 students together with 105 teachers and administrative personnel of Paradise High School each with a check for $1,000.  He said it was the most satisfying and heartwarming donation he has ever made.

Robert “Bob” Wilson has been referred to as a “go-to-guy”.  That is an understatement.  For his humanity and all he has accomplished and shared with all of us, Bob Wilson is an Escondido Forever Legend.

This is the last of the Forever Legend bios.  Next week The Times-Advocate will publish the nine senior Future Legends Award Group (FLAG) winners, their high school and application highlights.  Each will each receive a $1,000 honorarium and a few other items in honor of a Forever Legend and compliments of the Rincon Band of Luiseño Indians.

The Escondido History Center is planning the October 9 Ceremony at the Santa Fe Depot in Grape Day Park at 4 p.m. The public is invited.