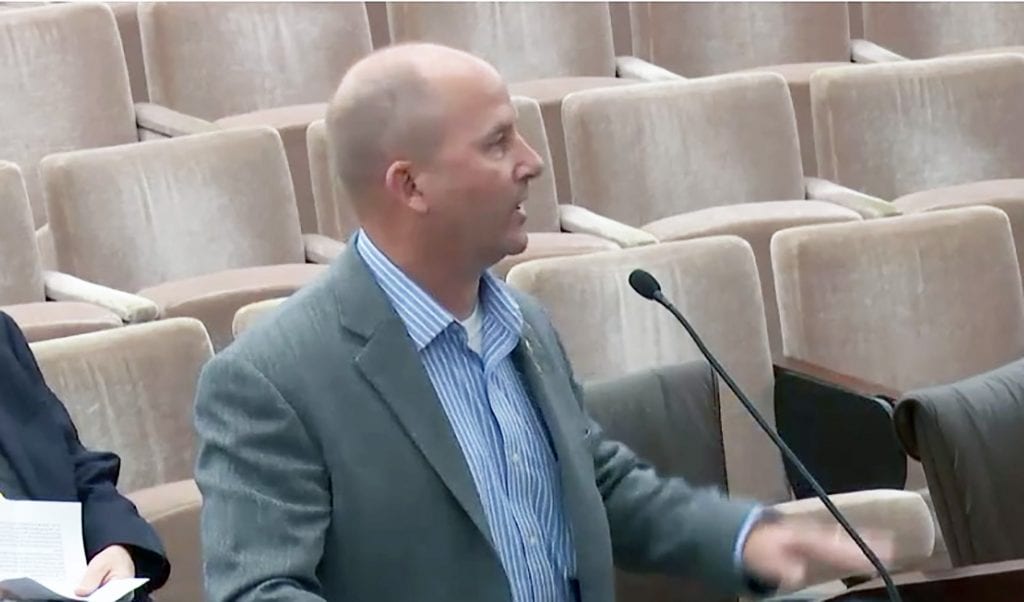 At the April 10 City Council meeting the Rincon Del Diablo Municipal Water District complained that the city was contemplating doing a sewer project with a developer within Rincon’s water district without bothering to check with it first.

The development is the 326 single-family residential development Valiano Project that the Board of Supervisors approved last July, but which is now the subject of litigation.

While the Valiano project is not within city boundaries, it is in the city’s sphere of influence. But it’s also within the Rincon district, whose boundaries are both inside and out of the city.

According to an official of the neighboring community of Elfin Forest and Harmony Grove, the city’s action would amount to a first step in annexing that unincorporated territory. Something they oppose—and similar to an earlier attempt four years ago that critics also called foul on for going under the radar without much advance publicity.

The resulting hubbub resulted in a one hour discussion over a consent item, which are normally passed without discussion.

Rincon’s Gen. Mgr. Greg Thomas told the council that the Valiano Project sewer treatment was assigned by the County of San Diego to his water district, and that it is in the unincorporated area, although within the water district’s boundaries.

The motion the council was asked to pass was part of the “consent calendar” and so could have been adopted without discussion if someone hadn’t asked that it be pulled.

The motion’s wording was this: “It is requested that the City Council adopt Resolution No. 2019-60, authorizing the Mayor and the City Clerk to execute a Sewer Flow Agreement with The Eden Hills Project Owner, LLC; The EHF Owner, LLC; The EHH Owner, LLC; and The EHA Owner, LLC (collectively the “Property Owner”) for the City of Escondido’s (City) acceptance of sewer flow from a 326 single-family residential development project (the “Valiano Project”) within the City’s sphere of influence.”

The fact that this motion was a “consent item” prompted Rincon board president James B. Murtland to send a letter to the city after the council meeting that began:   “It was quite a lengthy discussion from both councilmembers and city staff, as well as members of the public, especially for a ‘consent’ item, which items are normally reserved for routine administrative matters and usually have little to no dialogue associated.”

Murtland added, “The process of placing it on the consent calendar did not lend to the topic as a very open and transparent process for discussion. In fact, we only found out about it being on the agenda late Monday morning, yet this item has ramifications for Rincon Water as well as all our current and future customers in the unincorporated area west of Escondido city boundaries.”

Murtland referred to a similar incident in 2015 in which a Memorandum of Understanding (MOU) signed with the Valiano developer “was done in a similar discrete and under-the-radar process, in which this agency had communicated our concerns to the city staff with the MOU after the fact, as well as the public involved in fighting the proposed development were upset with the potential workaround of the county approval process.”

Murtland conceded that notifying an entity outside the city boundaries is not required, “but given the past sensitivity on related action and current litigious nature of this development and impacts to the surrounding community, earlier outreach and communication would have been beneficial and in line with a good neighbor policy.”

He said the water district and city staff have sought for six years to “increase collaboration and more open discussions between our staffs and our elected bodies – establishing a more professional working relationship over this time.” He said the proposed agreement ran counter to that.

Murtland said that during the heavy rains, Rincon provided emergency storage of city recycled water in one of its reservoirs. This assisted the city to avoid spills and potential fines.

The Elfin Forest, Harmony Grove Town Council was also perturbed by the agenda item. Its president, Jacqueline Arsivaud—who also spoke at the meeting—sent an eight-page letter to the council that began: “Thank you for the opportunity to comment on the proposed agreement between the City and Integral Communities for the provision of sewer service to Valiano (‘the Project’). We were quite surprised and dismayed not to have been notified as we normally get copied on City correspondence affecting our jurisdiction. Given the fact we were not notified, and only found out about this agenda item Monday through a third party, there are a number of comments we would like for each one of you to consider when the item comes back for a vote.”

The letter added, “This is the first step to annexation, and thus should be evaluated in that fuller context. Regardless of what the intentions of the City Council are today in terms of expansion, the context of this action you are asked to vote on is contemplating a full annexation. By LAFCO rules, the ability to execute a service agreement for provision of services outside a city boundary, but within its sphere, hinges on the anticipation of a later annexation (“in anticipation of a later change of organization” (annexation) with the city (Government Code Section 56133).”

Arsivaud’s letter concluded, “Had you understood the full ramifications and context of the vote staff recommended, which involves our constituents potentially being eventually annexed into a city they specifically fought to de-annex from, you might have better appreciated why the few neighbors and local jurisdictions who were aware of the vote with a couple days’ notice were complaining about a lack of communication and transparency from the City staff.”

Speaking for the motion was Gil Miltenberger, vice president of land acquisition of Integral Communities. He noted that the Board of Supervisors have approved the project, whose EIR studied multiple sources to provide sewer. Turning to Escondido was logical because of its HARRF secondary treatment plant, which has the capacity. “It’s a huge amount of benefit for the city and a logical choice for us,” he said.

The city’s utilities director, Chris McKinney, emphasized that the development is within the city’s future study area and that the project is beneficial to the city. He conceded that the area was subject to a master plan study by LAFCO, “However it’s hard for staff to imagine a more cost effective way than gravity flow to a pump station,” he said. “We don’t think further study is necessary.”

Councilmember Mike Morasco wanted to bring the item back in early May when councilmember John Masson is back from a trip and vote then.  Councilmembers Olga Diaz and Consuelo Martinez recommended the two staffs get together and work out a solution. So no vote was taken at the meeting.

The city would benefit financially from approving the project. As the staff report noted: “The approval of the Sewer Flow Agreement will result in the construction of an upgraded sewer lift station and a permanent wet weather storage facility for the City, resulting in operational savings and a net of approximately $1.7 million in sewer connection fees.” It would also fund sewer system upgrades.

The territory is non-continuous with the city. It could require annexing surrounding additional unincorporated territory for LAFCO (Local Agency Formation Commission) to support it since that agency, which has jurisdiction over boundaries of districts and cities almost always insists that cities not create “islands” of territory.

The County of San Diego Sanitation District  previously divested itself of this territory and  asked Rincon to prepare a Master Plan for providing sewer for Harmony Grove and other nearby territory, including the Valiano project.

“The County divested itself of the land. It’s within our water district. It falls within our jurisdiction for planning,” Greg Thomas told The Times-Advocate. “We were tasked to do a sewer master plan to figure out best options Harmony Grove Village.” However, apparently the Valiano project developer had other ideas and reached out to the city.

Thomas said the city probably didn’t understand the ramifications of what it was proposing. “I don’t think they were fully informed by the developer on county issues, and LAFCO issues,” he told The Times-Advocate. “I understand where the city is coming from, but I don’t think they realized we had been assigned to do a sewer plan while they were proceeding with an irrevocable offer of annexation.”