Although it’s next to the valet parking entrance to the casino, SR-76 is wholly owned by the Rincon Band of Mission Indians.

The name, after State Road 76, has great historical significance for the tribe, which used the original trail along the San Luis River to migrate and forage from the inland to the coast. The trail eventually became that road.

The first beer to be created was a Kölsch-style, which is a clear, all-barley pale ale. SR-76 will offer at least four different styles of beer, rotating them seasonally. It will produce up to 20 different brews each year.

On November 5 the brewery held an open house and “soft opening,” although it will be open from now on (see below for hours.) The staff of the brewery was there to meet the public and offer tastings.

Of course, at the top is Brewmaster Brian Scott, a longtime area brewer, who has helped manage several breweries in the area, including Firehouse, Mission and Karl Strauss. He has been in San Diego a little over 13 years.

Scott will showcase beers intended to highlight the region and location. This rare opportunity gives him a really unique opportunity to draw inspiration, as well as ingredients from the local area, which plays naturally into his philosophy behind beer.

Scott plans to showcase beers that will highlight the region, using ingredients from the local area. His philosophy, he says, “is focused on creating beers that are approachable, well built, and balanced. Brews that show off the lighter side of the spectrum like Kolcsh, Wheat beers and Pale Ales.”

A clean, crisp, delicately-balanced beer with subtle fruit and hop character. Subdued maltiness leads to a well-attenuated and refreshing finish.

We talked to Carrie Mecaro, who created the iconic look for the brewery that is a fusion of the “industrial” look that is trendy with breweries — but also draws from the native culture that is so important to tribal members

We asked her to elaborate on the design features. She noted that the industrial look was a bit of “form follows function” because she needed to work with the existing open ducts and pipes of the building.

“Given that the existing space was full of industrial ductwork and piping our goal was to deemphasize those visible mechanics by introducing other materials into the space,” she said.

“We utilized the existing drop ceiling panels by rearranging them to shield the larger clusters of industrial piping and ductwork from view and were able to also strategically locate them for better acoustical value throughout the space. Incorporating the logo of SR-76 into the interior was of high importance so we chose to create a large dimensional wood wall with the logo laser cut into the wood and back-lit for a dramatic effect. The paint colors used are also a reflection of the regional agriculture and reflect natural elements (earth, ocean, 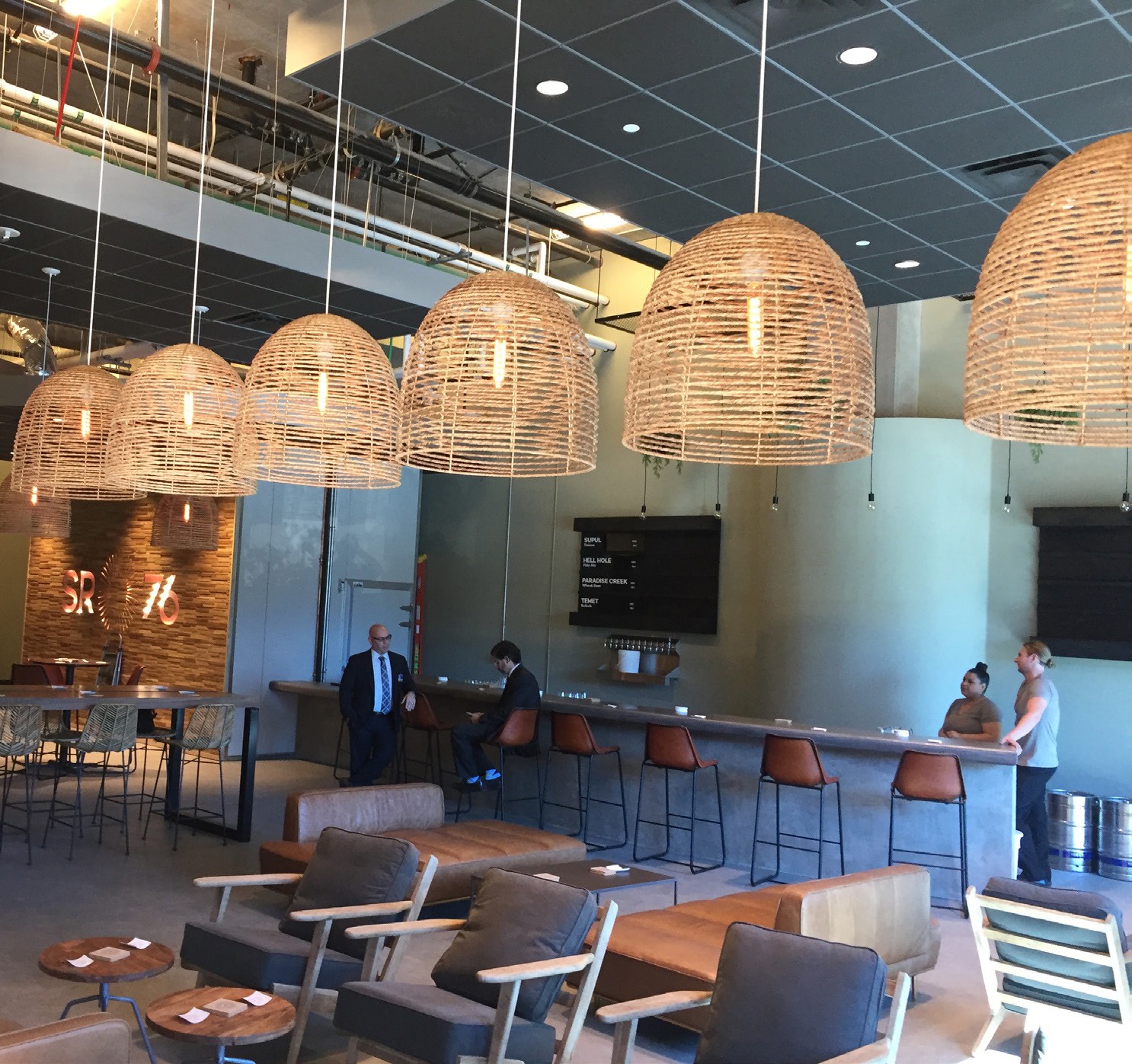 From the woven pendant lights and barstools to the soft leather seating and wood elements, the designer’s goal was to create a casual and comfortable, welcoming vibe.

Because there is so much concrete in the space they used natural materials with interesting textures to soften those edges and create a more organic and modern feeling.

“From the woven pendant lights and barstools to the soft leather seating and wood elements, our goal was to create a casual and comfortable, welcoming vibe. We also used a ton of plants! Having a focal wall full of planters and hanging plants really does create a sense of openness and lightness in the space,” said the designer.

Members of the tribe are interested in seeing iconic tribal symbols in the interior design. One such symbol is petroglyphs, literally prehistoric artwork carved into the living stone. There are many such ancient works of native art in San Diego county, although most of them are in locations that are protected from molestation by people who might harm them.

“Future artwork,” said Mecaro, “will be created to tell the story of the rich culture and history of the tribe as well as to support the brewery concept and to demonstrate the significant meaning of the SR-76 in the Tribes history. We are in the middle of exploring ideas to go about creating that artwork in a way that will be modern and unique, but still showcase Tribal culture and history, perhaps in the form of petroglyphs. Stay tuned!”

Her company, A.Community. A Design Collective is made up of Carrie Mecaro-Interior Designer, and her business partner Nastaran Ghomi-Architect. They formed their business in 2013 after working in the industry for about 15-20 plus years each.

Mecaro explained the origin of the company: “We founded our firm upon one simple concept, creating community, which then became our name. Out for dinner one night we were sat at the ‘Community’ table by the hostess who was incredibly apologetic thinking we wouldn’t like it. We looked at ourselves, laughed, and the light went off. We love to create community with others, we love to listen and learn from everyone we meet and the idea of sitting next to a stranger is exactly our whole point. We can create a community out of anyone and anywhere as long as we are open to speaking with and learning from those we do not know. Long story short, we had such an incredible table mate seated next to us that night and had one of the best dinner conversations of our lives.”

Their mission statement defines a company “founded with the simple belief that design is not just an act of building, it is the creation of a vital destination. We see design as a strategic approach in achieving a unique expectation. It’s about discovering the needs and aspirations of our Clients. A belief that creating sustainable spaces is rooted in intelligent design and planning and that the most creative spaces grow organically from the relationships we build with our diverse base of Clients. Simply put, we build spaces that foster inspiration. Places where people feel good. That’s COMMUNITY.” Visit www.com-collective.com/

SR-76 Brewery is located at 777 Harrah’s Rincon Way, Valley Center. Stay tuned to the website for news about the grand opening.