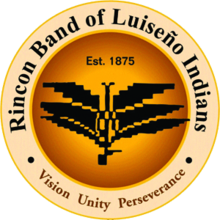 Escondido city officials announced today that the Rincon Band of Luiseño Indians of Valley Center has agreed to contribute $800,000 to fund the shortfall in the East Valley Parkway/Valley Center Road construction project.  This exceeds Rincon’s Fair Share obligation of $579,000 to mitigate traffic impacts on city roads from the Harrah’s Resort Expansion project.  A signing ceremony will take place at 4:30 p.m. at the February 10, 2016 City Council meeting.

The project widens a 3,000-foot segment of East Valley Parkway/Valley Center Road to provide three lanes in each direction between Beven Road and Lake Wohlford Road.  The bridge over Escondido Creek will be widened to accommodate two through lanes in each direction north of Lake Wohlford Road.  Construction will include curbs and gutters, streetlights, landscaped medians, new pavement and traffic signal modifications.  The estimated total cost of the project is $9.7 million. Construction is expected to begin late summer or early fall.

Escondido Mayor Sam Abed expressed appreciation, stating, “Thanks to the Rincon Band of Luiseño Indians, we now can complete this final stretch of road improvements which will greatly improve traffic flow and safety for Escondido and Valley Center residents, as well as visitors to the area.”

According to Bo Mazzetti, chairman of the Rincon Band, there is usually a long gap between calculating and collecting fair share funds to actually mitigating a traffic problem.  “We funded the extra amount needed to make the improvements because we wanted to solve the problem sooner rather than later.

“Our government has a vested interest in traffic safety because we live on these roads. People we care about drive on Valley Center Road–our neighbors, our guests and our families use this road, and our emergency first responders depend on it.”

The Rincon Band of Luiseño Indians governs a 5,000–acre reservation in Valley Center. Established in 1875, the Rincon tribe is a sovereign government, recognized by the Constitution of the United States, federal law, and policy and court precedent.  As such, the tribal government has many responsibilities and powers equal to city, county, state governments, and even the federal government, with which tribes have a government-to-government relationship.

Owners of Harrah’s Resort Southern California, the tribe uses profits from this, and other commercial enterprises to provide legislative, regulatory, judicial, and administrative governmental services to the residents of the Rincon reservation. Federal law restricts the expenditure of gaming profits to tribal government programs and services, but allows for charitable contributions to other governments and non-profits.