‏Police have arrested a 37 year old man by the name Jeremy George Vague. Vague has been charged with suspicion of kidnapping with intent to commit robbery or rape, forcible sexual penetration and assault with intent to commit a felony. He was arraigned at the Vista Court House this past Wednesday (September 21st) following his arrest two weekends back; he is being held at the Vista Detention Facility. These charges go back to two case’s involving three woman aged between age eight-teen to twenty years old. The most recent case was on Friday afternoon September 16th at Palomar College’s San Marcos campus where an 18 year old female student was assaulted, the woman was not identified. Vague who is a Uber and Lyft driver drove his blue 2014 Chrysler Town & Country minivan to the fore-mentioned campus where he then picked up the 18 year old female who attends class’s at the college to drive her to her home in Escondido; Vague than “Instead of taking the women directly to her residence, Vague intentionally turned off the Uber app,” and “diverted his route and drove the victim to an alternate location where he then sexually assaulted her,” Lt. Justin Murphy told reporters at a news conference this past Wednesday (September 21st) at Escondido Police Headquarters. Murphy then said Vague “was then arrested the same evening,” by Escondido PD detectives.

‏This however wasn’t Vague’s first time on the Palomar campus; investigators later found out that Vague “attempted to lure another (female) student on the Palomar College 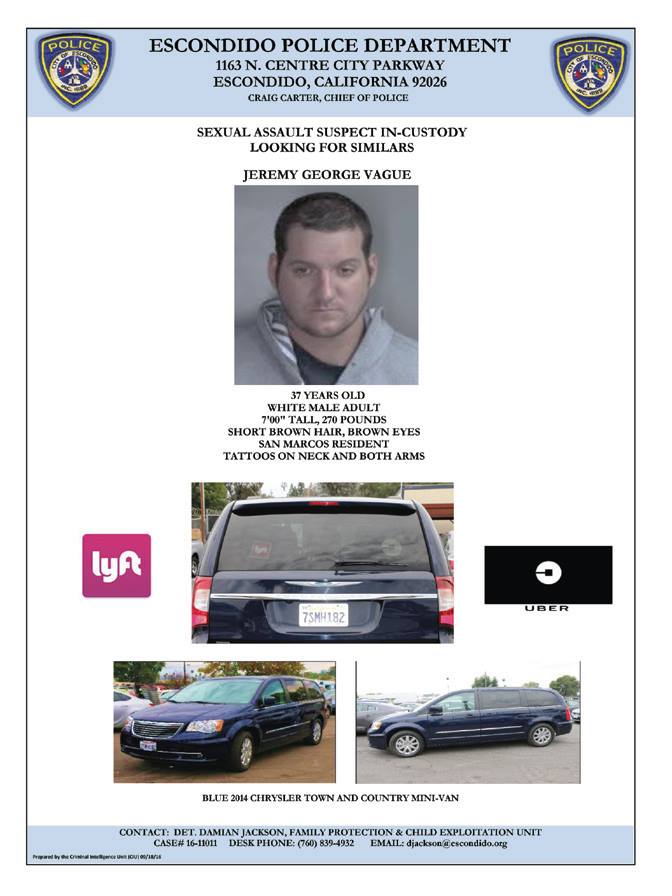 campus into his van” on Tuesday, September 6th “this female refused to get into the van, then contacted the Palomar College Police Department,” Murphy said. Murphy also said  “since their was no specific criminal violation during this incident,”  Vague was contacted and advised by police not to return to the campus.”

‏Lt. Murphy also described another incident “the following day on Wednesday, September 7th Jermey Vague gave a 19 year old female a ride to an address in Escondido as a driver with the driving service Lyft in the same mini-van.” Murphy continues “Upon arrival at the intended location Jermey Vague sexually battered the 19 year old rider and another 19 year old female who was awaiting her arrival.”

‏Murphy says “Investigators believe there may be additional females in San Diego County who have not yet reported to police that they were victimized by Jermey Vague.” Investigators are asking any further victims who to call police. Murphy described Vague as “a white male adult 7ft tall 270 pounds with short brown hair,” and “has tattoos on his arms and neck.” (See photo above) Murphy says that the Escondido PD have been in contact “with the driving services Uber and Lyft,” he also said that “Uber and Lyft have been cooperating with investigators throughout the process and are providing information requested through the legal process,” and that the PD was “notified that (Jeremy Vague’s) employment with Uber and Lyft have been suspended pending the outcome of the investigation.”

‏Keep reading the Escondido T-A for more on this developing story.