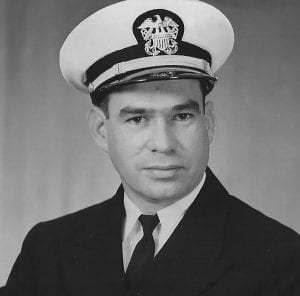 It is with great sadness that the family of Richard Hatfield of Escondido announces that he passed on June 24 at Palomar Medical Center, Escondido.

One of four children, Mr. Hatfield was born in Camden, New Jersey to Kathryn Burkett Hatfield and Howard Henry Hatfield. He enlisted in the U.S. Navy at age 17 and proudly served from 1946 to 1974. He was very proud of his 28-year Navy career, as were his family.

He served on the USS Putnam DD- 757, the USS Great Sitkin AE-17, the USS Ajax AR-6 and he had two tours in Vietnam. He was also stationed in San Juan, Puerto Rico and Sasebo, Japan where he was able to have his family with him.

He retired from the Navy in San Diego at the rank of LCDR (lieutenant commander.) Shortly after his retirement the family relocated to Westminster, California where he went to work for AIRCO and EG&G, working on repairing the USS New Jersey BB-62. Twenty-six years later he and his wife moved to Escondido where they lived for the next seventeen years.

After his second retirement, he volunteered at the Westminster Police Department for six years and he was the president of the Heather Glen Home Owners Association for several years.  He was a member of the USS Great Sitkin Association and he attended several ship reunions with them. He enjoyed keeping in touch with his old shipmates and reminiscing about his Navy days. He also loved walking and was often seen walking many miles around town.

He was a kind and loving man, one of the “good guys.” He will be missed terribly by his family but they are happy to know they will be seeing him again in the future.

Mr. Hatfield will be lovingly remembered by his wife of 63 years, Alberta (Kraemer), his two daughters, Roberta (Jim) Crouch and Joanne (Bill) Pridgen, his grandchildren Bill (Lana) Pridgen, John Michael (Heather) Sheff, Derek and Danielle Pridgen, several great and great- great grandchildren and brother Charles (Paula) Hatfield, brother in law John Brackman and many nieces and nephews. He was predeceased by his brother Howard Hatfield and his sister Jayne Brackman.

A memorial will be held on July 28 at 2:30 pm at the Miramar National Cemetery in San Diego. A reception will be held immediately after the memorial.  According to his family: “Dad wanted us to remember the veterans” so donations in his memory can be made to the Wounded Warrior Project, PO Box 758516, Topeka, Kansas 66675 or woundedwarriorsproject.org.