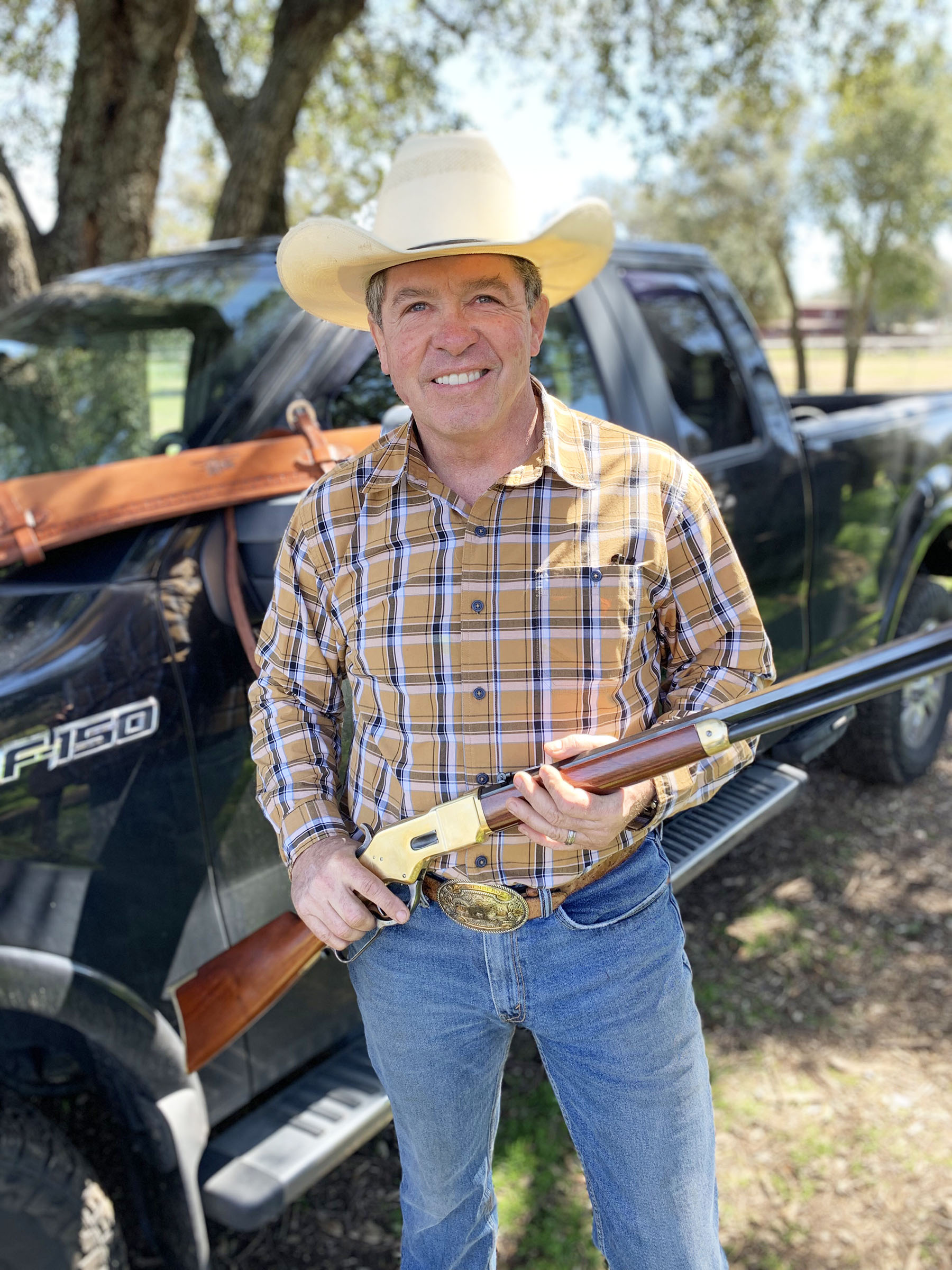 Retired Navy SEAL Larry Wilske is running for the 50th Congressional seat that in last November’s election was retained by a thread by incumbent Duncan Hunter Jr.

Wilske is a retired master chief and U.S.  Navy SEAL, who served 30 years before retiring in 2013. As a SEAL he was a Certified Jumpmaster, Diving Supervisor, and ultimately a Command Master Chief. He deployed 14-times around the world including to East Timor, Bosnia, the Philippines, Iraq, and Afghanistan; with six of those deployments in combat. He was awarded the Bronze Star Medal with Combat V (Valor, two awards), The Meritorious Service Medal (two awards), the Joint Commendation Medal (two awards), Navy Commendation Medal (three awards), Joint Achievement Medal, Navy Achievement Medal, Combat Action Ribbon (two Theaters) and various other unit service and campaign awards.

He grew up in San Diego. Although the incumbent, Duncan Hunter Jr. has not yet said whether he will run for reelection, he is under indictment for misusing campaign funds, and the trial is about to begin.

“With the challenges we had in the last election we got beat up very much. Hunter won a safe seat with a close vote,” he said. “With the trial looming, I would hate to see the seat get lost by the Republican Party. We have the highest concentration of veterans, military retirees, DOD employees and active duty of any district in the country. To not have a veteran running for that seat is not representative of that district. It’s one of the most conservative districts in California. So as a small business owner, and retired Navy SEAL I think I fit the district very well and can represent it very well.”

Wilske has never held public office. This is his second time running for Congress. The first time was when he ran in the 53rd Congressional district right after he retired. “Knowing nothing about politics, I said ‘sure, I’ll run,’ ” he recalls. “It was a great learning curve and I think we did better than anyone else against Susan Davis.”

He and his wife, Therese moved to Descanso and into the 50th District seven years ago. “I’m a firm believer that if you are going to run in some place you should live there,” he said.

He owns his own business, the Mackenzie group, which is a consultant for off-shore and logistical support, mostly for the U.S. government. They also run a small charter business.

In his run-up for his campaign, Wilske surveyed Independents, Republicans and Democrats of the district to find out what issues concerned them the most. He is tailoring his campaign to talk about those issues.

“The number one issue combined of all the groups is term limits,” he says. “I’m a complete and total believer in term limits. I never thought Congress was supposed to be a career path; I thought it was supposed to be a supplemental job. Successful people can go and represent their district in Washington and after no more than four or five terms in the House, or two terms in the Senate, be done with it,. I would say that once you have served in public office then you should not be able to serve in public office any longer.  They are not really representing the people, they are representing themselves.”

Second Amendment rights are up there as district concerns, he says. His campaign literature calls for action to “directly challenge ALL state regulations directly in opposition to the 2nd Amendment via the 10th Amendment. Make the 2nd Amendment our single ‘Gun permit.’ ”

He is very enthusiastic about the need for immigration reform and border security.   “First I would wholeheartedly go into what we have not done: secure the border first. In 2014 I was chairman of all the National Border Security Summit in Mira Mesa. We covered everything on the border. We can’t have reform until we have a secure border.”

Although he supports President Trump’s “wall” Wilske sees that as just one tool of many. Drawing on his experience as a Navy SEAL, he advocates using electronic means along the border, combined with Measurement and Signature Intelligence (MASINT), ELINT (intelligence-gathering by electronic means,) SIGINT (intelligence derived from electronic signals and systems.) and HUMINT (covert intelligence-gathering by agents or others) along with  “repositioning some of our assets to monitor the border. All the wall does is slow people down.”

Another piece to securing the border is better pay for the people who patrol it. “Our border patrol agents are some of the lowest paid law enforcement officers,” says the candidate. “They are our first line of defense. We need to pay them a lot more. They work a year or two and farm out to other law enforcement that pays more. If we paid them according to their worth we would have a much better experienced force on our border.”

He added, “Once our border is secure then look into congressional immigration reform and reshape our relationship with Mexico. Mexico can be a great business partner but we can’t concentrate on that until immigration and drug problems are minimized.”

He also advocates working with Mexico to begin jointly hearing asylum cases of refugees trying to enter the country. “That would ease the burden quite a bit,” he said.

Wilske is a man of faith and includes that in his discussion of politics. “In this very conservative district it is important not to disenfranchise faith and politics from one another,” he said. “I believe they go hand in hand. I base that the laws of our country are based on Judeo Christian laws. The Hall of Justice has a  reference to the Ten Commandments. That’s the foundation of our law. Folks like to say our nation is based on Judeo-Christian ethics. I like to say that Judeo-Christian laws allow the exercise of Judeo-Christian values throughout our country and the freedoms and liberties in our constitution.”

“Putting Veterans First,” is another of Wilske’s top priorities. “I want to aggressively push for VC reform,” he said. “When I retired the VA was a mess. I forewent using Tri-Care. I used the VA exclusively.” In December he had a second hip replacement. “The surgeons were fantastic but the bureaucracy to get to them was a nightmare. The VA has the capability, but it doesn’t have the right customer service. The VA doesn’t need more money. They need a culture change to be more customer service-oriented. They have good people but they don’t have the right mission vision.”

Often when he visits the VA Hospital in La Jolla Wilske he asks others about their experience with the VA. “I talk to people who weren’t able to figure out what to do, because no one was really helping. If I can ask questions and help such people, others can also. It’s a leadership culture problem.”

Veterans still have a massive suicide issue, he says. “The 911 crew that joined will soon reach their twenty years. We are going to have a surge of retirees, and I’m sure the suicide rate will go up. When you are in military you get taught how to tie your shoes, everything. You become a resource manager.”

Those retiring are given training for about a week to learn how to get along in the civilian world. “Then, when they are out those resources are gone and despair hits,” he says. “Some will argue that’s not the VA’s job. I believe that it is. I believe that those who leave the VA should be treated at least as well as someone leaving prison on parole. Until they are in the next chapter. I think if we take a proactive role for people who have served honorably, that horrific suicide rate will go down.”

Which highlights another reason why Wilske is running.  “Quite frankly I don’t think anyone else running has that kind of access to the VA or knows the problems like I do,” he says. That assumes that Hunter doesn’t run again. Wilske hastens to add that he’s not running as a competitor to the incumbent. “If he’s found innocent on all sixty charges I will step down the next day. If he is found guilty I’ll go forward.”

Another important issue among Republicans and Independents of the district is Sanctity of Life, says Wilske. “I’m absolutely pro-life. Never been otherwise, but I think one of the things I would like to do in Congress is carve out some of the funds that go to Planned Parenthood to give pre and post abortion counseling to women. Give someone who has gone through that horrible event some compassion in the hopes they don’t do it again.”

He adds, “I want to be sure that Planned Parenthood isn’t racially targeting ethnic groups. A high propensity of clinics are in minority neighborhoods. The founder [Margaret Sanger] was an absolute racist. That needs to be talked about openly and get back to the science and reality of abortion.”

Wilske talked about his impressions of President Trump. “I think he’s been the most successful president in my lifetime,” he said. “Most importantly, he wrote down and said what he was going to do. He got elected and went to the list and did it. That’s a great leadership trait and one I intend to follow.”

You can learn more about the candidacy of Larry Wilske by visiting his website: Larrywilske.com