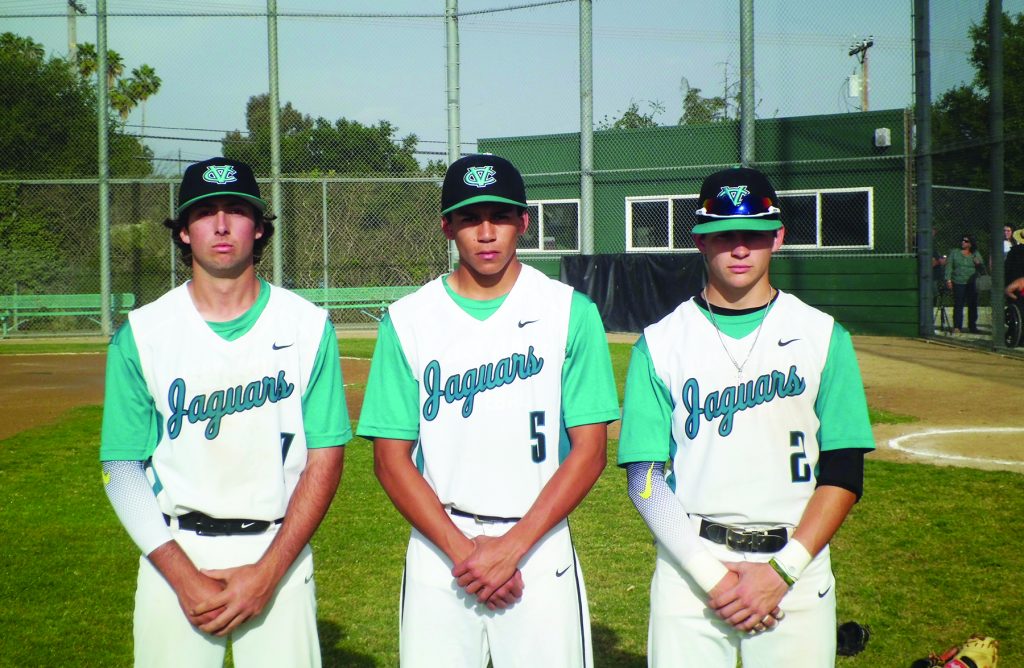 The Jags got all the offense they would need in their 4-2 win over San Pasqual from hitters (from the left) Dylan McFadden, Tuupash Turner and Zach Mahrenholz. Photos by Jim Tal Evans

When the San Pasqual and Valley Center baseball teams collided last week in a three-game series that was condensed into a span of just four days, the status of the respective clubs was significantly different.

The Golden Eagles came into the matchup on a roll and with real wind beneath their wings. Winners of four straight and beginning to make a move in the Valley League standings, the G. Eagles were looking to further validate themselves and keep their season headed in the right direction.

For the Jaguars, their circumstance stood in sharp contrast to that of San Pasqual’s. Though often competitive, VC hadn’t been able to close out some winnable games and as a result, a victory over Kearny in the season opener had been its’ lone triumph prior to the tussles with SP. The Jags had gone from being hungry for a win to being flat out ravenous for one.

But when all was said and done and when each of the three taut and tight games had played out, a remarkable juxtaposition had taken place. With a sweep of the series, it was Valley Center that emerged from the proceedings confident and buoyed by its’ performance, while it was the G. Eagles that felt the sting of defeat, leaving them acutely disappointed and with their previous momentum having all but vanished.

Two days later, the Golden Eagles were unable to hold onto early 3-0 and 4-2 leads as the Jags immediately countered and wrested away control of the game with a 3-run second inning that staked the hosts to a 5-4 edge. VC managed to tack on a pair of additional runs in the fourth that ultimately proved decisive despite a late rally by SP that brought the final count to a narrow 7-6. In their most substantial hitting outburst of the season, the Jags turned into prolific mashers by belting out a massive 15 hits.

So as the finale on an overcast and cool Thursday afternoon was about to get underway, the teams had varying objectives in mind. For the Jags, the prospect of a satisfying sweep that might truly rejuvenate their season was there for the taking. As for the G. Eagles, the goal was to shake off the frustration of a couple of near-misses and make their way back into the win column. There was plenty at stake as Jag left-handed ace Moffitt toed the rubber and prepared to deliver his first pitch. 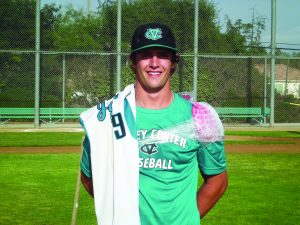 In a gritty performance, Jag starter Brock Moffitt was tough when it mattered most while going the distance in a victory that gave VC a sweep over the Golden Eagles.

And just like the day before, SP got on the board right away. A hit batsman and an error set the stage for junior Drew Thomas who then ripped a grounder up the middle for RBI single. One out later, left fielder Brett Sayers got just enough of a Moffitt pitch to squib it beyond the VC hurler which help produced another run.

That 2-0 advantage was to last until the bottom half of the fourth frame. Up until that point, SP right-hander Izaiah Rocha was doing a commendable of keeping the Jags at bay. Although not overpowering, the 6’3” senior was pitching to contact and effectively mixing up his offerings.  But the Jags had nonetheless put together some good swings against Rocha, including a sequence that featured three successive line outs. There was a sense that if the Jags just stayed patient and continued getting after it, a breakthrough was a distinct possibility.

And sure enough, here came a VC eruption. Third baseman Dylan McFadden, who has been delivering some timely hits as of late, reached down and neatly served a pitch into right field that plated the Jags’ first run. Next it was Tuupash Turner’s chance and the youngster came through when he sent a high, slicing fly ball to right center that fell in for another RBI hit. And finally with SP’s infield drawn in, leadoff man Zach Mahrenholz spanked a laser shot into left that Sayers managed to grab but it was plenty deep enough to bring home VC’s third run.

The home team was able to add a bit of insurance an inning later against reliever Jake Madison when after Ryan Baranowski kick things off with a lead single, he eventually came around to score on an errant throw to first.

Given such an edge, Moffitt was not about to fritter it away. The truth be told, the tough lefty wasn’t exactly at his optimum. At times, his high octane fastball didn’t have quite the pop it normally does and Brock’s command could have been better. But this kid is nothing if not the ultimate competitor and when you can win without your best stuff, that’s the sign of a consummate pitcher.

Moffitt was impressive when he bowed his neck and extricated himself from a dicey two-on, no-out situation in the sixth. And then, as if he’d gotten an extra jolt of adrenaline, Moffitt rediscovered his lights-out form with a scintillating last inning of work in which he struck out the side with a bender in the dirt, a sharp curve and then a lively heater that simply overpowered Madison.

VC coach Dan Egan is proud of the way his team has hung tough during a season of adversity (4-17-1, 3-6 in the VL) and is now in the midst of turning things around with a three-game winning streak. “As of late, the guys have stayed patient and have really been doing the job,” he salutes. “Our confidence level is up now and this is a great way to try and salvage the season.”

The Jags will attempt to extend their encouraging late push when they take on neighboring Fallbrook during next week’s three-game set that will wrap up the regular season.

Meanwhile, the G. Eagles (9-13, also 3-6 in the VL) will look to rebound quickly but it won’t be easy as they are scheduled to take on VL heavyweight Escondido three times down the stretch. But before getting somewhat short-circuited by VC, Coach Andrew Clark’s squad had been playing some sharp ball and they certainly have the capability of presenting a challenge for just about any foe.

On the mound, Madison (3-1) and junior Andrew Walsh (4-3) have provided solid starting pitching to go along with some nice work out of the bullpen by Rocha (2 saves). As for the sticks, senior first baseman Dylan Jacob has stung the ball hard with an average hovering near .350 while also leading the team in hits. Couple that hefty output with dependable batsmen like the consistent Thomas and Sayers among others, and SP certainly has the wherewithal to generate the runs necessary to be competitive.

Where VC and SP go from here and how they finish out their campaigns will be most interesting to follow. But for the time being, it’s the Jags who are riding high while the G. Eagles have been relegated to licking their wounds. Sweeps are like that – they have the power to considerably lift one team while creating considerable angst for the other.