Residents “Rally to Reopen” for 5th straight week in Escondido 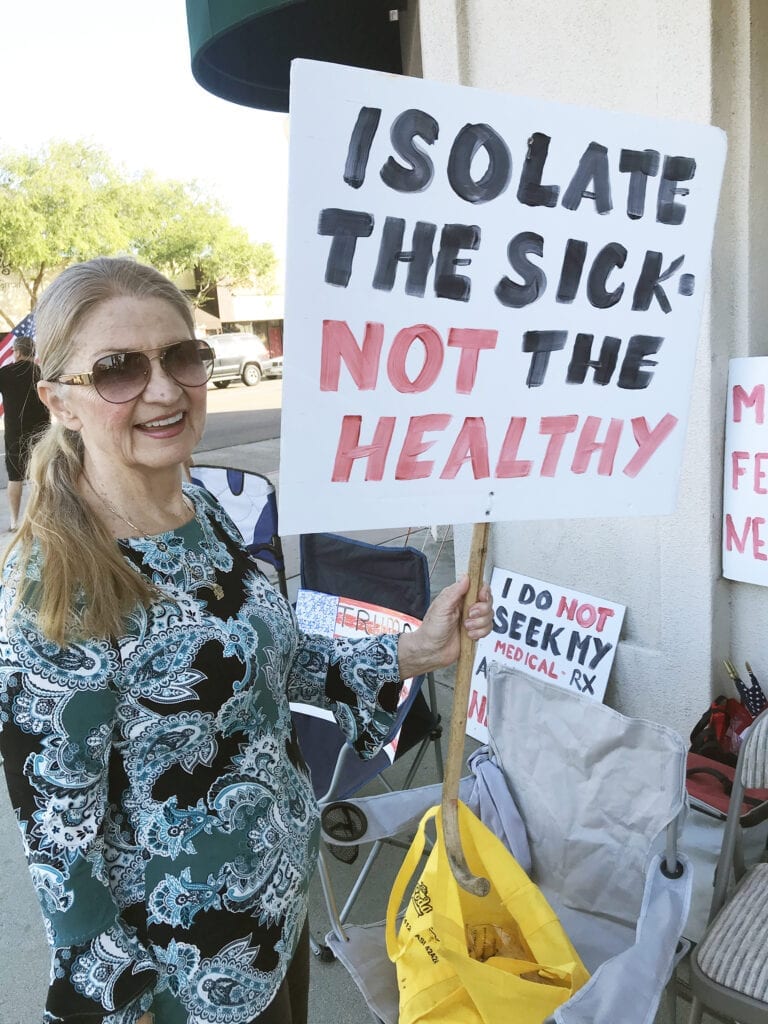 Although many demonstrators were there to bring back Cruisin’ Grand, others had different points to make. Photo by Johnathan Day.

Demonstrators gathered once again in Downtown Escondido to rally against sustained shutdown orders from the Governor’s office, even after Governor Newsom approved San Diego County two days prior to advance further into Phase 2 of the state’s reopening plan, which allows for in-restaurant dining and in-store retail shopping, with certain modifications.

Convening for the 5th straight Friday, several residents of Escondido stood at the corner of Grand and Broadway holding signs, waving flags and cheering as cars honked in support. When asked why the group continues to amass each week, one demonstrator said “For freedom. It’s that simple.” Another added, “They want to divide the nation with this pandemic, to compromise the Bill of Rights. The Governor is trying to take our powers away; we want to take California back.”

Many of those gathered are a part of the Cruisin’ Grand group who meet downtown every Friday night from early spring through summer to showcase classic cars and hot rods in what is now the “largest weekly Car Cruise west of the Mississippi River.. Scheduled to have begun in April, “Cruisin’” has been suspended until further notice due to the coronavirus outbreak, although the group hopes to restart the events by mid-June.

This hasn’t stopped many of its members from holding their own unofficial events, however, on what they now call “Friendly Fridays.” “Our goal is to support downtown businesses in Escondido,” said one organizer. “They’ve been hit hard by this crisis and rules imposed because of it, many of them, we believe, created based on wrong modeling and projections. Healthy people aren’t getting sick, at least in large numbers. We’re tired of it and people are tired of not being able to go back to work. Life has to go on. People are hurting.”

Added another, “Some of these rules are so ridiculous. We get fined for watching a sunset from our own vehicles. We can surf in Encinitas but can’t a mile away in Cardiff. In Florida, the county decides if you can stand on dry sand, but the state is in charge of patrolling wet sand and water. It’s crazy! What are we doing? I believe it’s a nasty virus that has affected a lot of people, but this has gone way too far.

Exclaimed another rally participant, “I want to go out! They’re stomping on my rights. I’m not sick and am not worried about getting sick. I think there’s just so much fear. Human beings are social animals and need to interact. We need to reopen for business!”

Several others in attendance at the rally were not affiliated with Cruisin’ Grand but were simply walking by or on their way to pick up food and decided to stop and join the crowd in support.

One said, “I was on my way to get a pizza at Filippi’s [Pizza Grotto] when I saw what was going on. I just think it’s time to get back to normal. Forty million people are out of work and we need to reopen. I miss going out to all these places down here, many of which I fear might not reopen. I just wanted to come here to voice my support for them.”

Others echoed these concerns, largely for those unemployed and the economy as a whole. “I’m retired but am worried about the future of our kids, their parents and the businesses of this community being able to stay afloat through and after all of this,” said one. “I want to help them out. That’s why I’m here. We have to get back to work.”

Members of Cruisin’ Grand and those who have joined in support to “reopen California” say they plan to continue gathering downtown every Friday night to maintain awareness for this cause.

“I believe what we’re doing is important. The public must be made aware of what is going on and voices must be heard. Our leaders are starting to take notice as you can see from the Governor allowing the reopening of restaurants and stores. It feels we are getting more back to normal every day. We can’t let up the fight, though,” said one.

Said another, “We’re getting closer to getting back to where we want to be but we’re not there yet. Escondido has suffered greatly in terms of the economic impact of this lockdown, especially with Cruisin’ being shut down. It used to bring in so much money to the city but now it can’t. They say this might be the new normal. I don’t want the new normal, I want the old normal.”