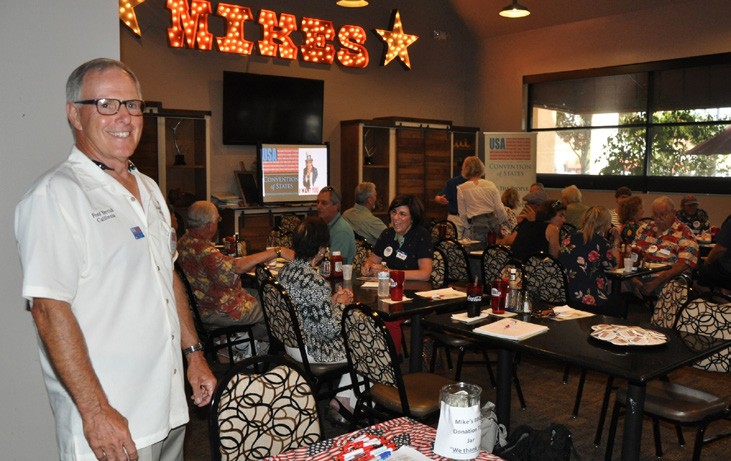 What do the people do if the political classes ignore their concerns? Usually nothing. But sometimes they do a little more . . .

Sometimes Popeye says, “That’s all I can stands, I can’t stands no more!” and Howard Beale bellows, “I’m as mad as hell, and I’m not going to take this anymore!” But those are fictional char­acters. Once up a time an actual poli­tician, the famous demagogue Huey Long, declared, “I used to get things done by saying please. Now I dynamite ‘em out of my path.” He was, however, assassinated.

On the other hand, Patrick Henry said, “Give me liberty or give me death,” and lived to tell about it.

Sometimes the inclination towards change rises out of nowhere, rather than from some politician or party. Resentment reaches critical mass and then, bang! That’s the idea behind the “Convention of the States.” Saturday afternoon a few dozen North County residents showed up at a meeting to learn about it.

They met in a meeting room donat­ed for the afternoon by Mike’s BBQ in Escondido. For a bunch of would- be agitators they were remarkably se­date, polite and well behaved.

Amending the U.S. Constitution need not be a partisan issue, and amendments could arise from the left, right and center of the political spec­trum said one of the organizers. In fact, they see it as a vital necessity that the effort remain nonpartisan for it to go anywhere.

The people who attended had a variety of reasons, and just as many causes, with many political spectrums represented. One woman said she was there because she wanted to do some­thing about climate change. Someone else wanted to get “corrupt private and corporate monied influences out of politics.” Others felt that the national debt is out of control and want to rein it in with a balanced budget amend­ment. One wanted to ban Islam from the U.S. Others supported term limits for federal officers. Many seek to cur­tail the power of the federal govern­ment.

The U.S. Constitution provides a remedy if enough voters reach the boiling point to rise up out of the grassroots of discontent, the kind that journalist Hunter S. Thompson once described as “fear and loathing,” and which has, over the years, produced the likes of H. Ross Perot and in this year of 2016 Bernie Sanders on the left and Donald Trump on the right (sort of.)

If you once voted for “the one” but he turned out to be closer to number two — what’s a political activist to do? For some there’s Article 5 of the U.S. Constitution.

The meeting was organized by “The Convention of the States Project,” a group that was formed about 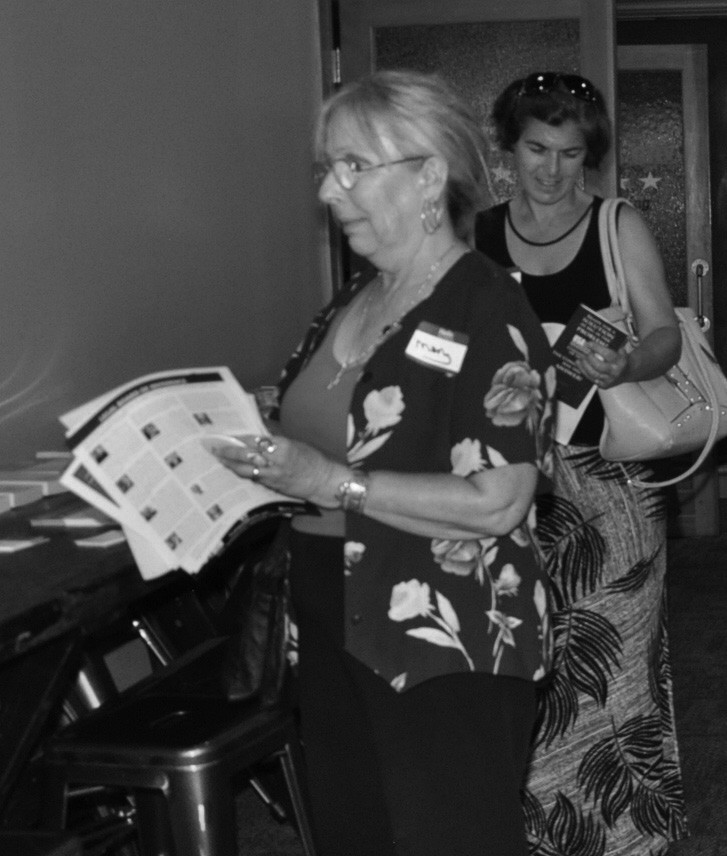 The meeting attracted the curious from all over North County, including two from Valley Center. Photos cour­tesy of Dianne Benoit

two and a half years ago. It’s a national organi­zation, grassroots to the core, whose goal is to force Congress to call a con­vention of the states that would con­sider amendments to the Constitution. This is a process never used before in the history of the republic. And when I write “force,” I’m not exaggerating. Once the requisite number of states trigger Article 5, Congress’s options are reduced to two: Name a date and a place for the convention.

This was the first of 14 such meet­ings that will be held up and down the state. The purpose is to attract volun­teers who are willing to contact state lawmakers.

The principal speaker for the eve­ning was Fred Yerrick, regional cap­tain, a resident of Bonsall, a former Marine Corps drill sergeant, an ani­mated presenter who described the ef­fort as a method for people “trying to get their voices heard.”

The practical aspect of the “Con­vention of the States,” is that the legis­lature of each state must call it, and 34 states (i.e. two thirds) are needed for Congress to be required to act. Then 26 states are required to name the amendments that would be considered by the convention. Any amendments that come out of such a convention would still need to be ratified by three- fourths of the states to be adopted.

However, “the people” can’t call the convention. Only the legislatures of the states may. Here at home that means persuading a member of the California legislature to introduce such a motion and for a majority of members of both chambers to pass it. Elected officials are naturally re­luctant to support a method of going around elected officials, even if they are federal officials.

This, conceded Yerrick, is going to be challenging. “California is going to be a tough nut to crack,” he said. “Right now we are just trying to get the word out. It’s a big job.”

Larry Sundram, co-state director of the movement told the group, “I’ve long thought that this country is go­ing to hell in a hand basket.” The main problem for him is the “expanding state.”

He noted that so far the movement’s message has resonated with 30,000 people in the Golden State who have signed the petition on the website: www.cosaction.com/

These are people, he said, who want to “take the country back” and make it “closer to what the founders intend­ed.” 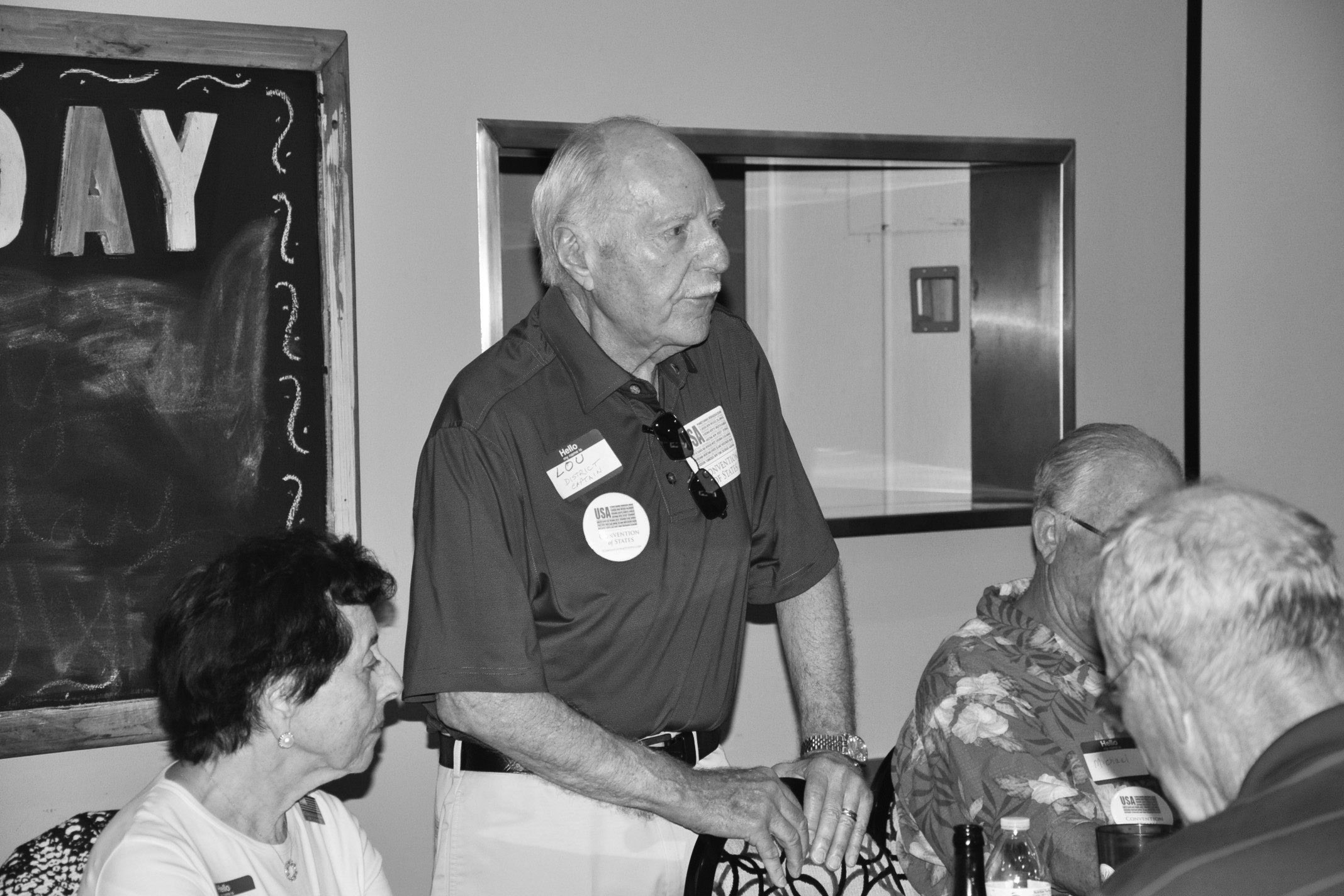 Another speaker, Lou Oberman- District Captain/CA Senate District 39/CA Assembly District 78, a for­mer member of the Tea Party from Vista, said, “Signing a petition is not going to do anything unless you get involved.” He noted that on July 4, 1776, fifty-six men signed the Decla­ration of Independence. “They signed their own death warrant,” he said. If the Revolution had failed, they would probably have all been hanged. “We the people fought the strongest army and navy in the world at that time.”

He added, “It doesn’t matter wheth­er you are a Democrat or a Republi­can, we have issues that need to be addressed. We the people created the government. We didn’t give them all those powers. If the federal govern­ment was doing a great job with the IRS and the VA we wouldn’t be here today. They are doing a poor job.”

He asked the question: “Who rules America?” and answered: “The major corporations, unions and wealthy in­dividuals.” And Congress? “They are sitting on their butts. They are not do­ing diddly for you and me.”

Article 5, Oberman said, “Is our savior if we the people get involved. We have a second American revolu­tion on our hands and you will have to get involved. This time it’s not by bearing arms that we will win, but by using our arms to get involved and get the attention of our elected officials.”

The last time the politicians in Sacra­mento voted on this issue the Judiciary Committee of the Assembly voted 8-2 against bringing the “Convention of the States” to the vote of the full Assembly.

“California is going to be tough,” said Oberman, echoing Yerrick. “We need to have a drive to get the judiciary committee to consider it again. “Last year we called all of our state legisla­tors. This year we are going to get their attention.” If they won’t listen when one person calls, maybe they will listen when ten or a hundred call. This should be followed by visits to lawmakers in their Sacramento offices,” he said.

The goal, said Yerrick, is for each captain to recruit 100 volunteers. If this kind of strategy seems familiar, noted Yerrick, it’s because “this is how Obama won the election.”

He added, “This is an organization that is big on the bottom and small at the top. All politics is local.” And at the top is a Grass Valley resident named Mark Meckler, who founded a group called “Citizens for Self Governance.”

The national organization has 22 full­time and several part-time employees. 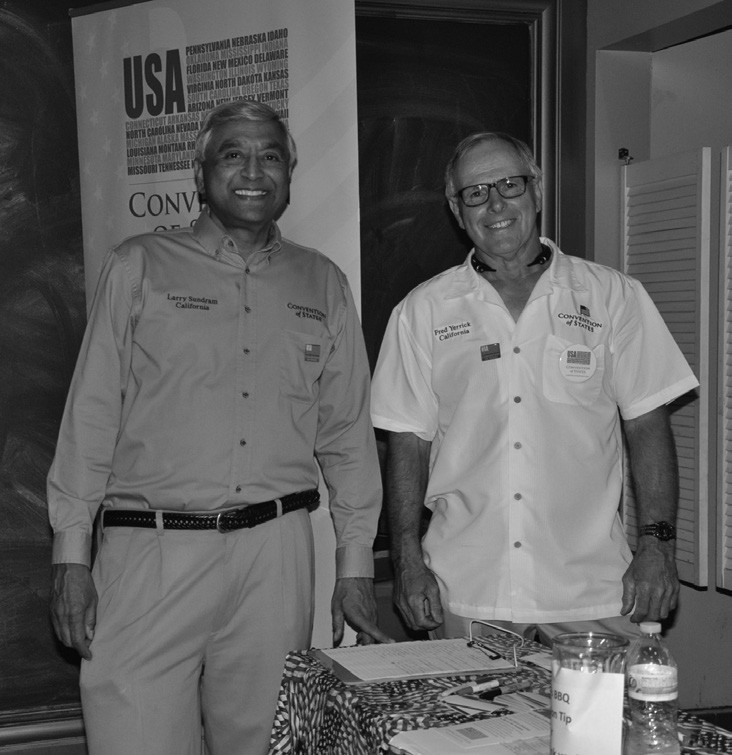 favorites for amendments to propose at a convention of the states. They became allies in the cause of a constitutional convention.

Last week, after both party conven­tions were over Levin declared, “We tried to put good people in. We’ve al­ready been through this. We need to use Article V under the Constitution and get our constitutional system back.”

They are aiming for a January 1, 2017 kick-off to get the attention of Califor­nia’s lawmakers.

This group is not the only such group working to get a convention of the states. There are several at work. For instance, a petition to establish a con­vention to discuss a balanced budget has received the nod from 26 state legislatures so far.

The complication is that all of the states passing such a resolution must use the same wording — the exact same wording — or Congress will not con­sider that enough states have passed the resolution.

“For this to be successful,” said Yer­rick, “it has to be neutral and non-parti­san. We are not about suggesting actual amendments. We want a process.”

This September the group will hold a “practice” convention in Williamsburg, Virginia to show how it would function. They hope to bring in state legislators to show the convention in action, in large part to calm their fears about what such a convention might do. They have invited lawmakers from 42 states.

“This will be a simulation,” said Yer­rick. “We don’t know how a convention will work because we have never done it.” He added that they are willing to offer an all-expenses paid trip to Wil­liamsburg for any California legislator willing to see the convention in action.

One of the main fears that critics ex­press is that of a “runaway” convention, in which delegates would start propos­ing off-the-wall amendments like al­tering the First Amendment, repealing the Second Amendment, guaranteeing minimum income, or proposing state ownership of all forms of production. In the minds of those who fear such a convention, anything is possible.

Yerrick argues that such fears are groundless, since any amendment com­ing out of a convention would need to be approved by three quarters of the states, just like any amendment in the past. In that process any single cham­ber of a state legislature can cause the amendment to be defeated.

It’s important for California to get on board, says Yerrick, because it is the largest state by population. It’s also im­portant that California have a delegate early on, because the earliest delegates will get on the important committees. “If thirty-four other states call this con­vention and starting forming commit­tees, what is the likelihood that you will be on the outside looking in?” he said.

For more information on the Conven­tion of the States, visit www.cos­action.com/