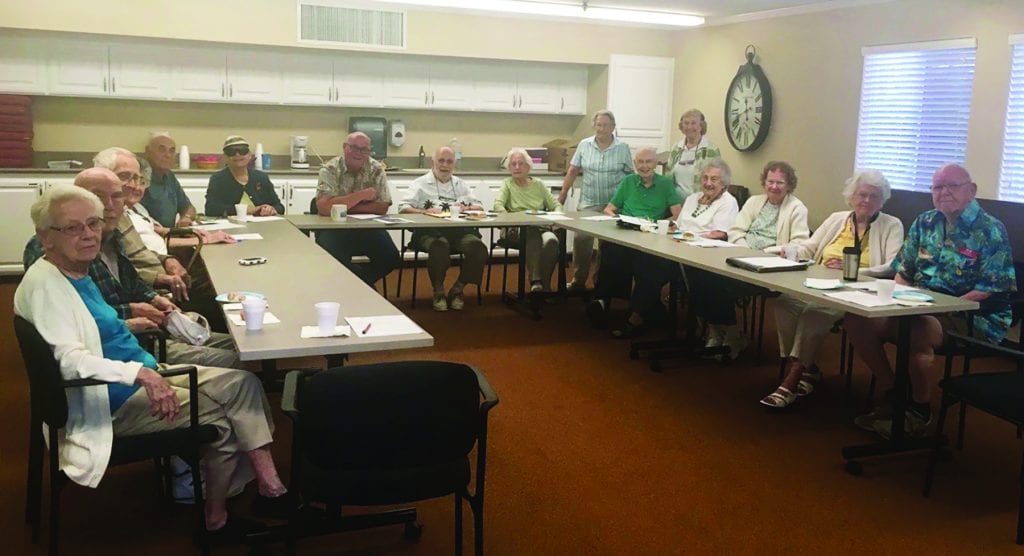 Seniors at Redwood Terrace holding a polite discussion of one of today’s hot topics: disparity of wages between CEOs and average employees. The discussion was led by the community’s chaplain Mick Cupples, sixth from the left.

Most of us have been told we should refrain from discussing certain topics in public – politics, religion, social issues. But for a group of 25 residents at Redwood Terrace senior living community in Escondido, rather than shy away from these often-controversial subjects, they embrace them.

For the last five years, the community’s Probus program has given residents a platform to debate the pros and cons of some of society’s most hot-buttoned issues – merits of a border wall, religious displays on public property and capital punishment, just to name a few.

The sessions are organized and moderated by Mick Cupples, Redwood Terrace’s chaplain. While conversations can be tense, and lead to disagreements at times, there are only two defining guidelines – that all opinions are respected, and everyone is allowed to express their perspectives free of criticism or judgment.

Cupples says this commitment to civil discourse allows participants to challenge their own beliefs; see different points of view; and gain a greater understanding of issues affecting them locally, regionally and nationally.

As we age, maintaining rich friendships and social connections is key to overall health and wellbeing. The Mayo Clinic says strong social supports, like those found through the Probus program, can help reduce the risk of many significant health problems, such as high blood pressure and depression, while studies have found older adults who are more social are likely to outlive those who aren’t as connected to others.

At the August 24 Probus session the residents discussed the disparity of wages between CEOs and the average employee.