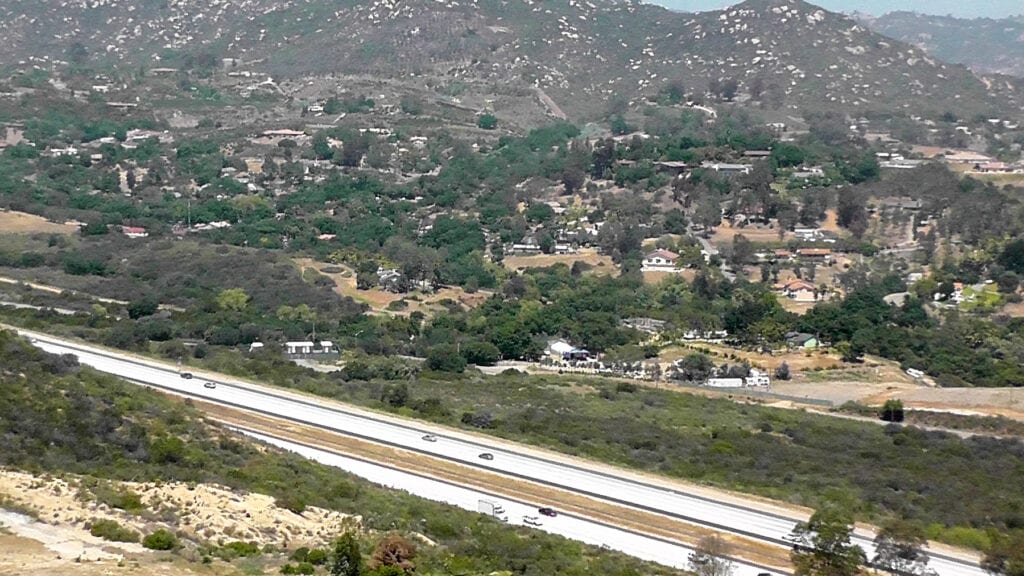 This view looks across I-15 from the site of the proposed recycling facility, 33 homes said to have sightlines to the property.

Living near a retail nursery or other “green” facility – maybe not a big deal. But next to a facility crushing and recycling all sorts of “inert” materials – that’s a problem, according to a petition being prepared for delivery to the head of Planning & Development Services (PDS) for San Diego County.

The petition, now with more than 900 signatures – and growing – seeks to block construction of North County Environmental Resources Recycling, a facility that will recycle materials ranging from waste construction debris to concrete, asphalt and other products of demolition.

Proposed by HillTop Group (San Marcos), the plant would be located on a portion of six parcels of land (about 139 acres) north of where Mesa Rock Road curves east and intersects with Centre City Parkway, I-15 providing the east-side boundary.

According to residents of the nearby communities, the facility would have a variety of negative impacts on them. In a statement, they say these would include “noise, silica dust, dusty traffic on streets from trucks carrying debris, fire hazard, pest hazard from storage of wood piles, [and] the lack of automated monitoring facilities, putting the burden of monitoring for operating violations on the surrounding neighbors . . .”

The petition also notes the necessary construction of a roadway to the plant, with site preparation to involve “[b]lasting with bulk industrial explosive, 2.5 tons per detonation, 132 times, to excavate 245,000 cubic yards of rock . . . .”

In response, HillTop Group says that it has done everything possible – and more – to prevent any negative effects on the nearby communities. Karl Gailey, one of the property owners, says that the company “wants to be a good neighbor.” He reports attending frequent meetings with community residents and inviting them to the site to explain the proposal and the mitigation of the impacts they fear.

Residents Kasturi Rangan and Byron Marler, heading the petition drive, say the facility would directly impact four adjacent communities with about 6,000 residents. And they note that the petition is only the latest in a series of efforts these communities have launched against HillTop, beginning with the attempt, nearly ten years ago, to block the “pocket rezoning” of the property to General Impact Industrial.

An original proposal for the parcels was a retail nursery, which Rangan and Marler say would have caused residents much less concern. But that was only one chapter of a long and winding pathway to the current proposal.

During the General Plan Update by San Diego county (begun in 2005), rezoning of the property was approved in spite of objections by the County’s own planning department, the City of Escondido, and the nearby residents.

In 2013 the Twin Oaks Community Sponsor Group asked county authorities to require a site-specific Environmental Impact Report (EIR) instead of accepting a “Negative Declaration” of impacts. Then in June 2015, county planners said that the EIR presented to them by HillTop was inadequate and any proposals for the cite “went dormant,” according to the statement from Rangan and Marler.

Construction of a recycling facility on the parcels was then proposed in September of 2019, with PDS stating that the project did not require an EIR under the California Environmental Quality Act (CEQA) The exemption found that the project offered no “peculiar impacts,” meaning impacts that could not be mitigated.

In the public comment period in October, 2019, PDS received about 500 statements, frequently raising concerns about “air quality, odors, noise, aesthetics, fire, and traffic. Staff reviewed all comments and prepared a written response to issues that were raised . . . .”

Rangan says that the current proposal by HillTop includes a variety of “contradictions.” Especially concerning is the potential for heavy truck traffic. The company’s plans call for two truckloads of “finished product” to be taken off the site each day (about 48 tons per day, 15,000 net tons annually). However, Rangan says that just two loads is unlikely given the amount of material brought in and processed.

Gailey promises that HillTop will absolutely stick to the two truckload limit. Responding to the residents’ other concerns, he notes that the parcel essentially sits in a bowl, with berms and natural other barriers and plantings eliminating any negative impacts on nearby homes and blocking sightlines.

A visual study of the project concluded that screening would consist of “natural topography, existing vegetation and landscaping with natural vegetation” and would “minimize the view from” I-15.  Additionally, “residences to the east . . . are approximately 0.7 mile from the site and will have limited view of the project.”

An acoustic analysis evaluated the noise that would be produced by the various pieces of equipment to be used at the facility and concluded that the project “would have less than significant impacts . . . on surrounding properties.” Gailey adds that I-15 traffic would be louder than any noise from the recycling operation.

Gailey says he and his staff even developed some hypothetical impacts and then came up with plans for mitigating these as well. He notes that development of the property is inevitable, and residents would have been better off accepting the nursery HillTop had proposed for the site. “Now they say they would have preferred that but not back then.”

A statement from Planning and Development Services says that a project decision is expected “early next month” by the director, Mark Wardlaw. If approved, the decision can be appealed, and Rangan and Marler suggest this is likely given the degree of resident opposition.