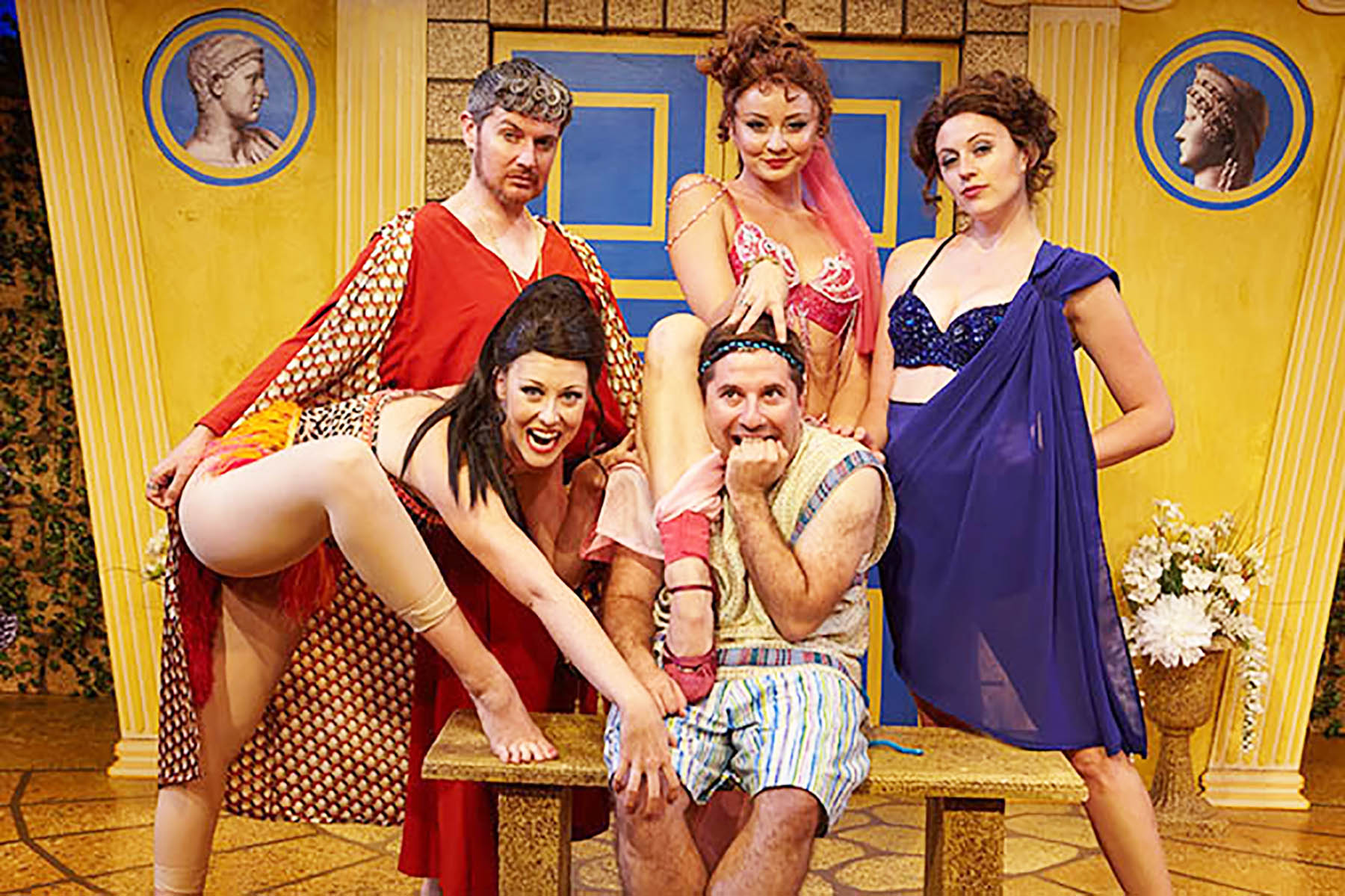 Nobody will ever accuse “A Funny Thing Happened on the Way to the Forum,” now playing at the North Coast Repertory Theatre, of addressing great themes or social questions. But it is a heck of a fun and entertaining show with plenty of belly laughs.

It’s a musical comedy, by the genius Stephen Sondheim (music and lyrics), then at the beginning of  his career, and Burt Shevelove (book) that consciously employs tropes created more than 2,000 years ago of slapstick, silly situations, miscommunications, doddering husbands trying to escape domineering wives for trysts with unsuspecting virgins, sly servants, pompous army officials—all held together by talented singing and dancing and plots that are so convoluted and fast-moving that it’s nearly impossible to keep track of who is doing what to whom—which is part of the fun.

If one word might be used to describe this performance it is “energy,” with the kind of frenetic, non-stop action, especially from the star, the highly talented, rubber-faced Omri Schein (apparently his joints and bones are just as rubbery, to judge from the knots that he ties himself into.) Schein plays Pseudolus, the endlessly resourceful slave who is trying to help his young master Hero (Chris M. Kauffmann) link up with a girl he has fallen in love with in order to win the ultimate prize: his freedom.  The role of Pseudolus was originated on Broadway in 1962 by the legendary Zero Mostel (before he was legendary,) and although Schein isn’t imitating him, he obviously channeled Mostel’s comic genius, while making the part entirely his own.

The singing and dancing by the entire cast are outstanding, especially since the stage is somewhat small for such a large ensemble.

The story takes place in Ancient Rome, about two centuries before the Christian era, and involves a set of stock characters derived from the most famous comedy writer of that time, Titus Maccius Plautus, who is credited with inventing theatrical comedy—at least his plays are the earliest Latin plays to have survived.

He employed stock characters over and over such as Swaggering Soldier, Courtesan, Young Man in Love, Cunning Slave, Old Man and Slave Dealer. Playwright Sondheim employed all of these stock characters and more and threw in elements of vaudeville, double meanings, mistaken identities,sight gags and many other tropes that have in the intervening centuries been employed by playwrights such as Shakespeare up to the current day. The Latin names of the characters often suggest who they are. Miles Gloriosus literally means “braggart soldier,” while Senex means “old man.”

Pseudolus comes up with an intricate scheme for helping Hero to achieve union with his love, Philia, a dim-witted but beautiful virgin slave played by Noelle Marion whom the slave must scheme to the highest level of his wits to prevent from falling into the possession of Miles Gloriosus (played with great verse and voice by Jason Maddy) who has purchased her from the smarmy slave dealer and pimp Marcus Lycus (David McBean) and is expected to come for her at any moment.

Hero’s mother, the formidable Domina, played by Melinda Gilb, decides to take a trip to visit her ailing mother and takes her husband Senex (played by Andrew Ableson) along with her. This leaves Hero without their supervision, which gives Pseudolus a chance to set in motion a complicated set of maneuvers that he hopes will eventually deliver Philia into Hero’s arms.

Domina leaves the head slave— the aptly named Hysterium in charge— but he is no match for Pseudolus.  Complications occur when Senex doubles back and, spying Philia, plots to cheat on his wife.

There’s also a befuddled old man, Erroneous, who has been out searching for his two children who were stolen from him in infancy by pirates, and who arrives just in time to add even more complications to the plot.

The comedy is also well served by a cast of courtesans, and various characters who play different roles when called upon by the twists and turns of plot. Without exception, the actors are top notch, with perfect comic timing and some great singing voices as well.

“Funny Thing” is so much fun that it’s easy to be drawn into the characters and forget that you are sitting in a theatre. You can’t ask for anything more.

The show also has a very fine four piece orchestra performing off stage that provides the back up for the various songs, the most recognizable being, “Comedy Tonight!”

The play is directed by David Ellenstein, who writes in the director’s notes that he got tired of waiting for the Rep to get a big enough stage for this play, which calls for a large cast, and so he threw caution to the winds and went with what is the largest cast ever to set food on the Rep’s stage.

We’re glad that he did!