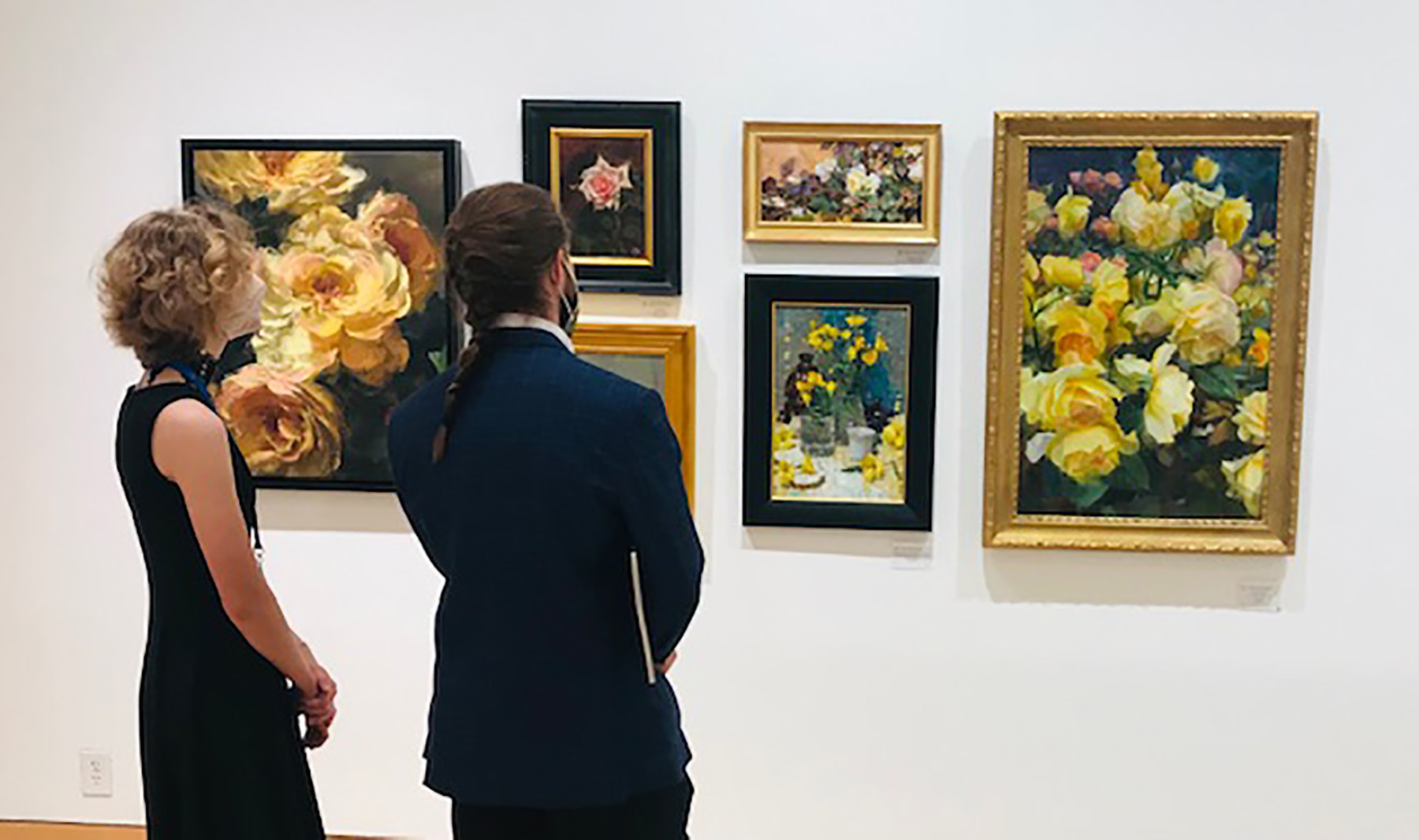 For art lovers weary of abstract painting that their kid “could do better,” or that “modern” artwork needing lengthy verbiage to explain, the California Center for the Arts currently offers an exhilarating change of pace.

The center is hosting the 30th Anniversary exhibit of the Oil Painters of America (OPA; Chicago), with attendees at last Friday’s opening reception getting first look at some of the very best of representational oil painting being produced in North America. The exhibit continues through May 16.

Painting comes in all types, but oil painting remains a standard in the richness and depth of color. And this 30th anniversary show offers the classical types of still life (detail-obsessed, blooms vibrant), portraiture (honest, revealing) and scenic views (the Turner-influenced most memorable).

And the representational form of oil painting continues to attract enthusiastic buyers, said Suzie Baker, OPA president, at the reception. Every work in the show is currently for sale, a portion of each sale going to support the center. Jerry Van Leeuwen, executive director of the center, reported several sales made, several others confirmed, at the opening.

Van Leeuwen said that the OPA made the initial contact with the center to explore the possibility of hosting its 30th anniversary exhibit. And Baker said this was the result of a recommendation by one of OPA’s past presidents, the center’s large open spaces especially appealing for the number of works exhibited and their exceptional value.

The organization’s national shows have often been mounted in gallery-type venues, Baker said, “but occasionally we’re looking for a museum model, such as the center, since generally more spacious, more prestigious.” And this better highlights the foremost quality of its members’ work.

That quality is exemplified in two ways.

One, a group of three dozen of the show’s paintings are the work of OPA Masters – “Master” being a “hard designation to achieve,” Baker said, because based on the individual painter’s “work, reputation and influence.” She said that about 70 members of the OPA have achieved the Master designation, enabling them to submit one of their own paintings for placement in the show.

And two, the bar was equally high for the other 210 paintings in the exhibit since they are just 10% of the 2,000 or so paintings offered for entry. Long-time San Diego artist Jeffrey Watts served as show juror and judge, selecting the works to be exhibited and those to receive awards.

Watts, an OPA Master, said, “It was great to get to witness the other Masters’ work in person. This is a fantastic show and has been getting better every year since I became a member, which is about 20 years now.”

Baker noted a variety of challenges facing the organization over the past several months. Normally, the OPA schedules its national show in conjunction with its annual conference, but this was disrupted by the pandemic, the uncertainties of scheduling, and having to offer so many of its regular activities virtually.

This year the society will hold its annual conference in Santa Fe, New Mexico, August 24-29, “in person.”

And Baker especially praised the staff of the California Center for the Arts in preparing, amid so much uncertainty, the 30th anniversary show. “They managed to mount a beautiful exhibition,” she said, “and OPA is forever grateful for their efforts on our behalf.”