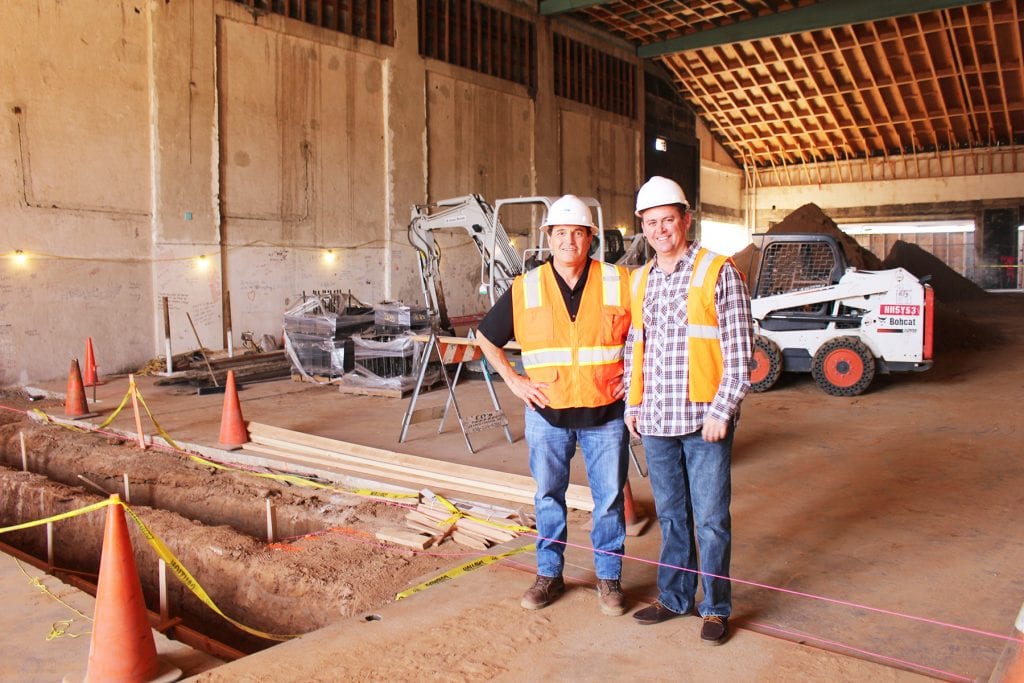 Don Romo of Erickson-Hall Construction Co (left) and Pastor Tim Spivey of New Vintage Church stand at the very edge of what will be the performing arts stage.

At the old Ritz Theater, which will be reborn sometime next spring as one of Escondido’s crown jewels, even the graffiti are positive and inspirational.

On a recent Sunday, members of the New Vintage Church—which is paying for the complete renovation of the Ritz Theater—made a pilgrimage to the archetypal Grand Avenue landmark and began penning graffiti on the interior walls to both lift the workers’ spirits and inspire them.

They inscribed Bible verses such as Matthew 5: 14-16, which begins “Ye are the light of the world. A city that is set on an hill cannot be hid.” They added non-verses such as “May God power his blessings on this church.” And, “Dear Workers, may you feel God’s spirit in this place as you work.”

“It’s really about ministry,” said Don Romo, who is a member of the church, as well as the principal of the construction company, Erickson-Hall Construction Co. He has promised that all of the work will be done at an agreed upon price—no matter what challenges the workers find along the way. So the church won’t be hit with any unexpected change orders.

Church members also regularly bring the work crew lunch and are planning a special Thanksgiving dinner for them.

The renovation of the Ritz, which was built in 1937, is taking longer than most anyone thought when the project was announced last April at the Heritage Garden gazebo across the street from the building. At that time they were talking about holding Christmas services in the church. Today, if all you do is look  at the outside of the building it is hard to imagine that any progress is being made. 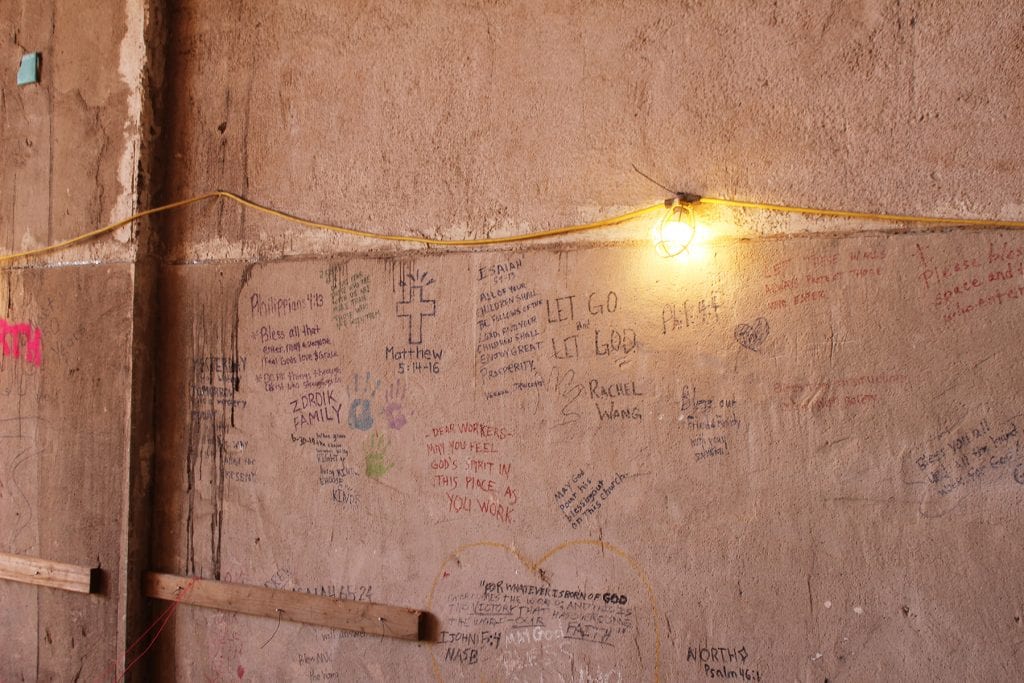 A different kind of graffiti. The members of the New Vintage Church one Sunday penned positive and inspirational graffiti on the walls of the Ritz Theater, which they are restoring as both a church meeting place and a performance venue that will be available to the community.

However, a lot is being done by the dozens of construction workers, according to Romo, who met me at the construction site about a week ago. We were joined by Pastor Tim Spivey of New Vintage Church.

“Christmas last year was the goal,” said Spivey. “but delays were no real surprise. The surprise is they haven’t been as bad as they could be in a project of this kind. To have a project of this type, scale and complexity finished in perhaps less than a year from first construction is a magnificent achievement. Erickson Hall deserves a lot of credit. A quick look around at the other construction projects downtown shows how difficult it can be.”

The Ritz Theater should open in the Spring of 2020, says Pastor Spivey. The corner building will open later, but not much later…maybe a month behind—as it is new construction. It too should be open the late Spring.

“We had to replace the roof after we discovered asbestos in the tar paper,” said Romo. “And it was no longer structurally sound.” In fact, almost all of the interior has been gutted, except for the structural steel and the pylons. “From that point we have been slowly demolishing things and replacing them where they will be better than before.” Romo uses that term “better than before,” several times during the tour.

Spivey added, “The Ritz isn’t just going to open. We hope it’s going to be something that will bring life to the community for years to come.”

He added that the “Ritz’s wonderful history” will be highlighted throughout the finished structure. “In fact, there will be small display case of relics visible from Grand Avenue. That doesn’t show in the renderings … but we added it.”

The basic structure of the building, the “skin,” is very strong. This required that parts be taken apart by hand to get to the building’s bones. This painstaking deconstruction was required because it was integral to the structure’s integrity—and vital to the workers’ safety.

They also had to remove hundreds of the old cinema seats. Which begs the question: What happened to them? “The old seats we’ve kept in storage,” said Spivey. “Don’t ask me how many but there are a lot. Some will make their way back into the Ritz in alternate locations.”

The two men are close-mouthed about when they actually expect the building to be ready for occupancy. However, one gets the impression that the rebirth of the theater might happen near the holiday that celebrates the resurrection of Christ. Coincidence? Who knows? But because they are not completely sure what other roadblocks they will encounter they don’t want to announce a firm date or even a particular month.

One thing is for sure, “It’s on budget right now, without a doubt,” says Romo. “Sometimes people see the building and not a lot seems to be happening. But a lot is going on.”

Now that Cruisin’ Grand has shut down for six months, the work should pick up speed. The streets shutting down around 4 p.m. each Friday had some effect on the project’s progress.

Even though the congregation won’t be able to start meeting at the Ritz in time for Christmas, as was originally planned, progress will start to become obvious by then, says Spivey. “I think it’s going to look better than we thought it would. I’ve been pleasantly surprised by what I’ve been seeing. Small things have really come together.”

Many community members are excited about the building’s rebirth, he says, “People are lined up to use the theater.” When the church was first discussing the project, “We felt this would fill an important role in the city.” 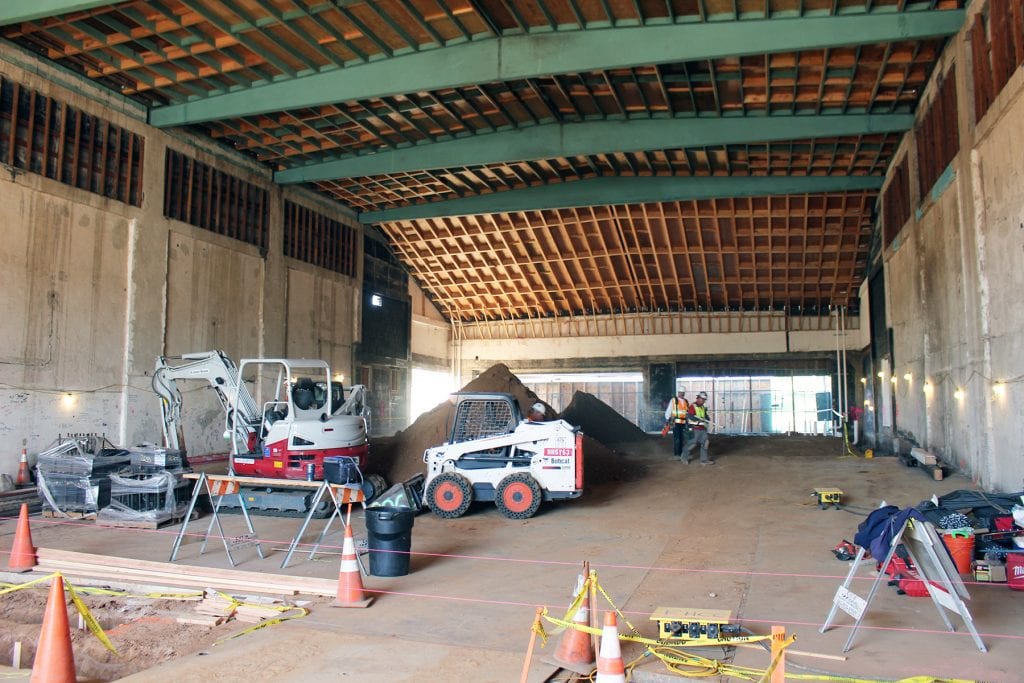 This view was taken at the edge of the performing arts stage, where once there was a movie screen that showed the latest films for decades.

Needless to say, the congregation of New Vintage Church is  also very excited about eventually moving into their permanent home. Currently they are meeting at the California Center for the Arts, Escondido, a few blocks away.

In addition to the theater, there will be  a gourmet coffee house/café on the corner (the name will be released soon), church and theater offices, and arts-based businesses—theater groups, dance studios, etc.

Church members’ patience has been sorely tested by the delays, but, say Romo and Spivey, they have also been tremendously faithful in supporting the project—and in maintaining a high level of enthusiasm.

They continue to show their appreciation to the workers by bringing them bottles of water and lunches on some days and keeping track of their work without ever losing faith in the process—including through all of the changes that were mandated by discovering things like the asbestos in the roof.

“They have done a fantastic job of staying hopeful and keeping the vision clear,” says Spivey.

3 responses to “Renovated Ritz Theater looking at opening early next year: not your typical construction job”