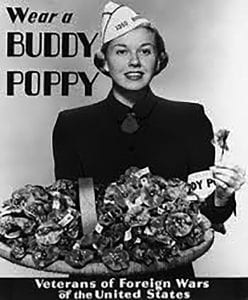 At one time, there was a “Miss Buddy Poppy.” One year the actress and songstress Doris Day held the title.

It’s small and unimposing, red with a green button center and a small white label hanging to one side like a flag waiting for a breeze.  When handed one, each person reacts differently.

Some are really surprised without knowing why, take it and handle it like a priceless thing.  Others look at it quizzically as if there is some mystery attached that they should or want to know more about but are afraid to take the step needed to ask.  Others grab it forcefully and put it away out of their sight as if the interruption in their day was something they needed to think about later, but not now.  Others walk by with a bland or kind “thank you, no” and continue on their way appearing oblivious or indifferent to the approach and the object and its meaning, yet, likely, carrying a weight heavier than any response can indicate.

And, then, occasionally, but enough times to make all other reactions worthy of the symbolism, the time, the effort, someone says, “Oh, I remember these when I was young.  We used to hand these out at the town square on Veterans’ Day,” the little, inoffensive object in their hands now transporting them back miles away and years in the past.  When you are standing there watching this, you almost want to see the film of what they are seeing, because you just know that it is filled with gaiety, innocence, simple pleasures, and a keen, minute sense of what it is to be an American without an agenda.

Since 1922, the ‘Buddy Poppy’ has been the official memorial flower of the Veterans of Foreign Wars (VFW).  It is enough to know that its offering and acceptance is an almost sacred exchange that memorializes the blood shed by American military members throughout our nation’s history.  To know or want to know more than that is a testament to one’s desire for a kind of investiture in our historical narrative.  A connection between that bloodshed and the America we know today, the freedoms and the restraints, the glory and the grind, united or divided, is an existential point in time and space.

Following World War I—called by that generation “The Great War,”—the Franco-American Children’s League began distributing real poppies to benefit children in the devastated areas of France and Belgium.  In 1919, throughout the British Commonwealth, King George V declared November 11 to be Remembrance Day, what later became known as Poppy Day.  Because it was that day in 1918, on the eleventh minute of the eleventh hour of the eleventh day of the eleventh month that the armistice ending WWI was signed between the other Axis powers, largely Germany, and the Allies, principally, England, France, and the United States. 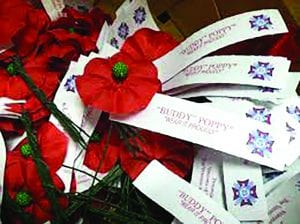 “Buddy Poppies” are still handed out by veterans and volunteers of local VFW posts. You will probably see them in coming weeks.

After four exhausting years that spent the youthful flower virtually of an entire European generation the guns stopped, the planes grounded, and the ships berthed.  But the mourning continued… and, by means of the “Buddy Poppy,” has really never ceased.  Except that what was once mourning became memorial.

By the start of World War I, red poppies had been associated with war since the Napoleonic Wars of the late 18th and early 19th centuries.  It was then that an unknown writer remarked how red poppies grew soon on the graves of recently interred soldiers.  And so it was for Lt. Col. John McRae, a physician- and a published poet- with the Canadian Expeditionary Force, who had volunteered at the age of 41 as a gunner and medical officer for combat at the beginning of WWII, on officiating at the burial service for his good friend, Alexis Helmer, who’d been killed during the Second Battle of Ypres in the Flanders region of Belgium.

The next day following the service, allegedly McRae sat in the rear of an ambulance and scribbled a poem, later titled “In Flanders Fields,” in which he invokes the image he noticed of red poppies germinating profusely around the graves of soldiers previously buried at this location.  From a purely botanical standpoint, poppies were about the only plant that could grow in the wildly disturbed soil of the Ypres battlefields due to the increased lime content.

This was the Western Front, a battle line for most of the war that ran from south of Zeebrugge on the Belgian coast, across Flanders Fields, and into the center of Northern France and where the Ypres Salient developed for the two battles fought there.  McRae’s poem is credited with this area of Belgium being described as Flanders Fields at all.  Once written in rough draft, he took several months of rewriting before, on submitting it, one magazine rejected it before a second, Punch, picked it up.  It became an immediate sensation, especially in Canada, McRae’s home country in the Commonwealth of Nations.  To this day, it remains arguably the most famous piece of Canadian literature, notwithstanding some criticism.  And from the rondeau-like effect of repetition in the poem is drawn the clear image of the (red) poppy that later became for the VFW the “Buddy Poppy”.

The emotive effect of the poem was almost immediate and universal.  It was referred to for fundraising, made common ground with soldiers in the battlefield, promoted in the cause of patriotism, and valued as a tool for recruiting.

The fighting soldiers themselves gained from it some solace attached to the daily horror they experienced in the trenches with the losses they suffered.   It became the first and the most famous writing to come out of World War I likely because it was published early in the war when spirits 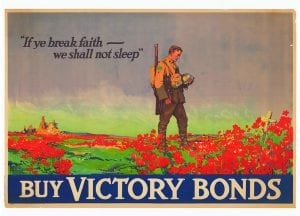 The image of the poppies of “Flanders’s Fields” was a powerful emotive force during the Great War, 100 years ago. It was used to urge the people of the Homefront to buy War Bonds.

and hope was still high for a quick victory and before other more famous soldier-authors began to die in combat when there seemed to be no end in sight to the carnage.  McRae himself died of pneumonia in the last year of the war—never to see the long-lasting effect his poem would have.

Today, the red poppy is still a symbol of Remembrance Day in both Canada and England.  The attachment that English-speaking Canadians have had to McRae’s poem is so fiercely held that senior citizens today who recall having to memorize it as schoolchildren claim that they think they can still recite it verbatim.  In the United States, the red poppy has over time become more associated with Memorial Day than with Veteran’s Day (originally Armistice Day), though the VFW distributes them on both days.

If you have read this, then you might, when presented with a “Buddy Poppy” next time by a volunteer VFW post member, consider a deeper reflection about what it means to accept it or not, wear it or not.  The acceptance and willing wearing of a “Buddy Poppy” can mean different things to different people if they are so touched.  So, when you do, either way, consider also what General Robert E. Lee said to fellow General James Longstreet on seeing a Union Army charge repulsed in the Battle of Fredericksburg, December 1862, “It is well that war is so terrible, otherwise we should grow too fond of it.”

Lee may have been a soldier, but like most at his rank was also a realist.  He, like McRae, had a task with which he had been trusted.  And he also spoke in awful truth about the hard realities soldiers in combat face in every war.  That is what the memorial is intended to honor.