Hundreds turned out Friday night for the opening night of the Niki de Saint Phalle exhibit at the California Center for the Arts, Escondido.

Wherever they turned they encountered fantastic beasts in amazing surroundings, the product of the fertile imagination of one of the most creative artists of the 20th and 21st centuries.

It was the largest attendance in many years, although California Center Executive Director Jerry VanLeeuwen wouldn’t say it was THE biggest. “It certainly was in the last ten years but I wouldn’t be able to say ever. The Chihuly glass show many years ago was a big event too I have heard,” he told The Times-Advocate.

Magical Circle itself is located in Escondido’s Kit Carson Park, and was the groundbreaking artist’s last commissioned work. Known for her larger than life sculptures, and her unique use of mosaic and fiberglass, Saint Phalle created an incomparable yet accessible view of what she called “Mythical California.”

Niki de Saint Phalle was a legendary sculptor, painter, and philanthropist. Her work is featured all over the world, and made a never-ending impression in San Diego County, where Saint Phalle spent the last years of her life. 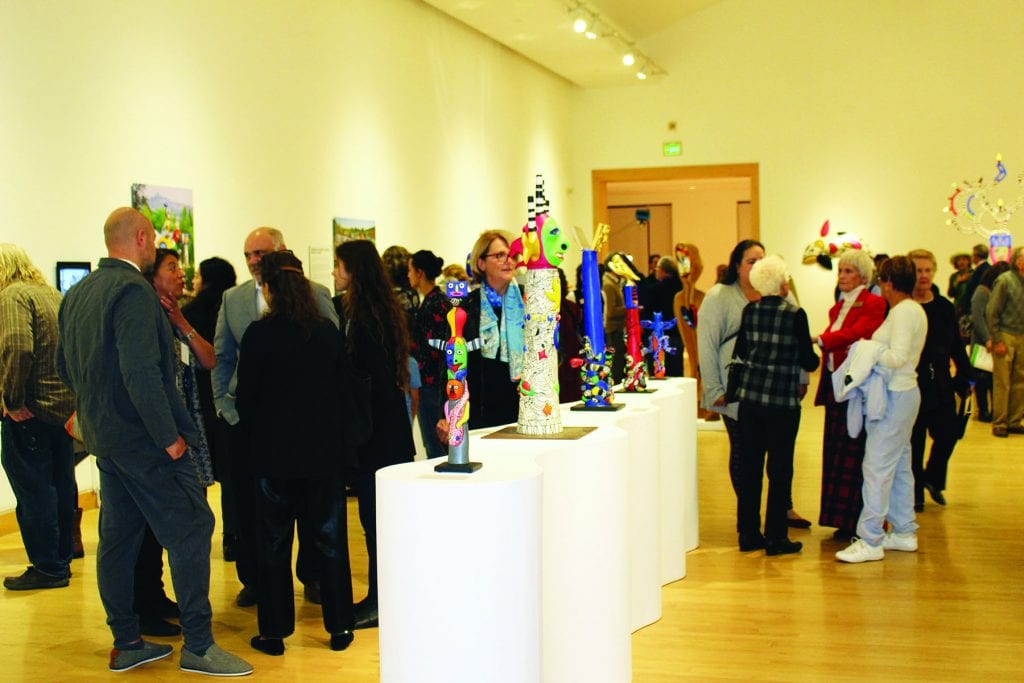 The Niki de Saint Phalle exhibit comes to Escondido by way of Paris. 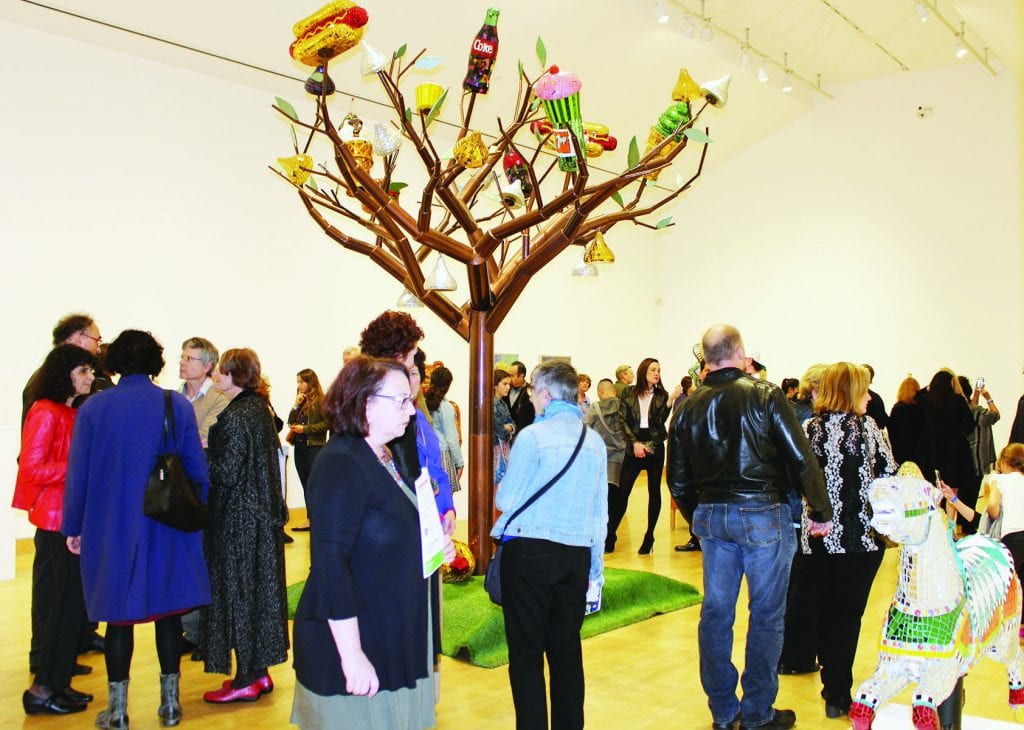 Visitor’s to Friday’s event mill around a “tree” whose fruits include a Coca Cola, hotdog, Hersey’s kisses and other treats. 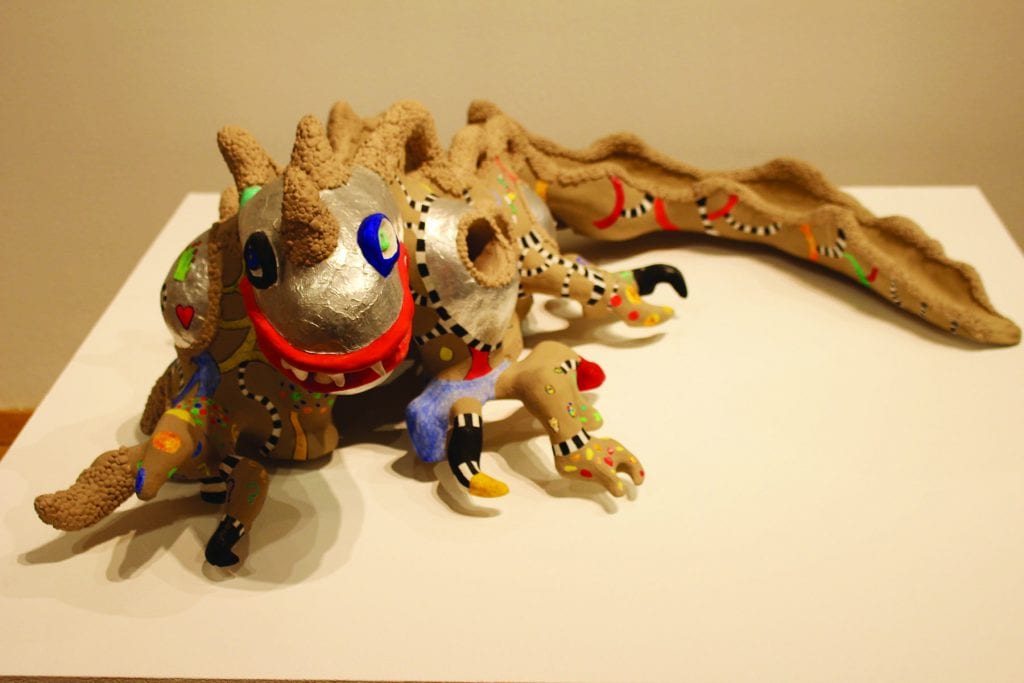 Another of the mythical beasts that de Saint Phalle employed in so many instances. This one looks like it just wants to be friends. Maybe sell you some car insurance. 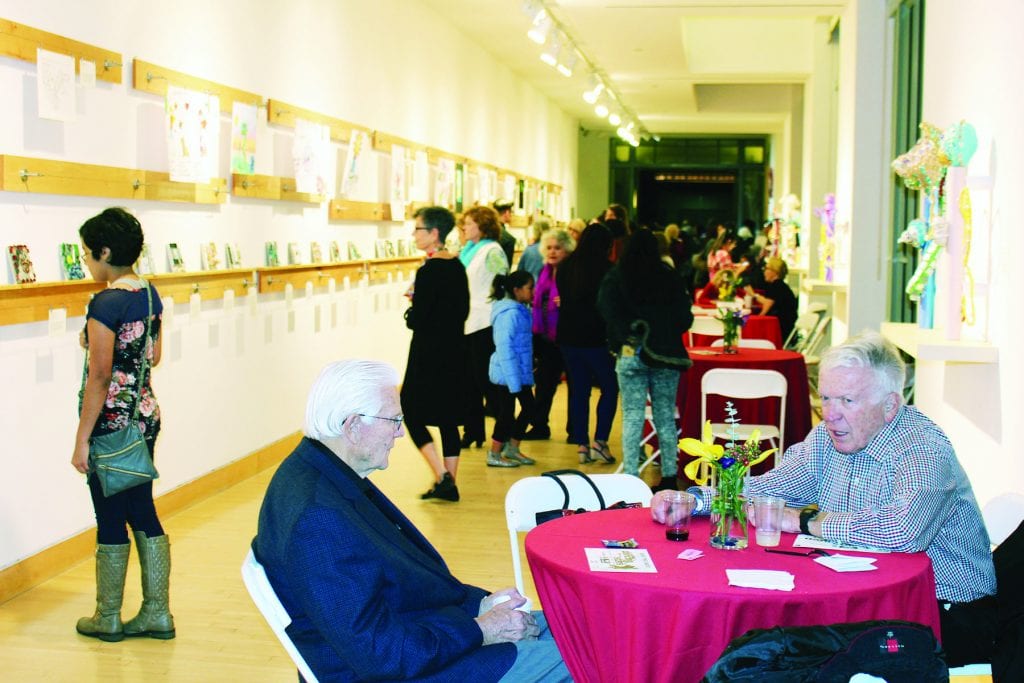 The artworks at the exhibit also include works from local students. 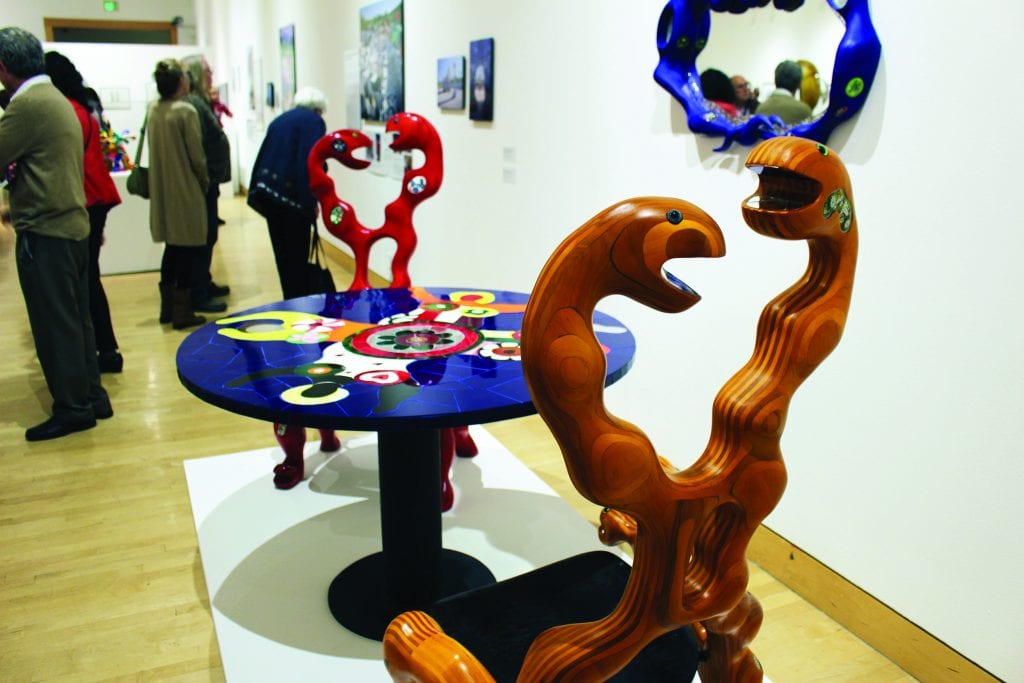 Mythical creatures, such as these entwined snakes form recurring themes in the whimsical yet compelling artwork of Niki de Saint Phalle. 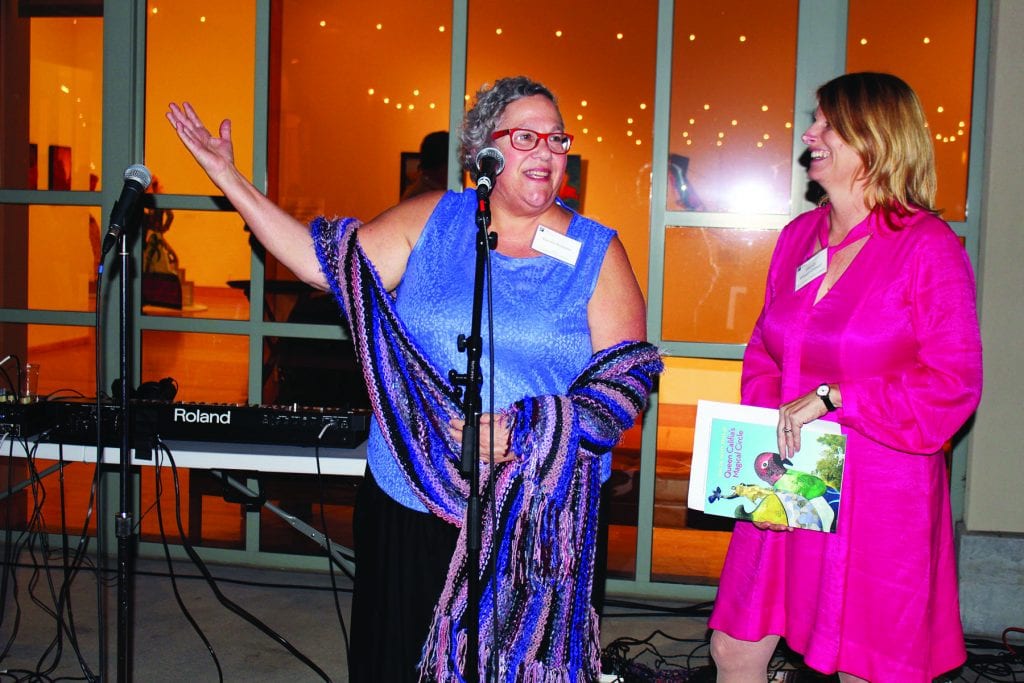 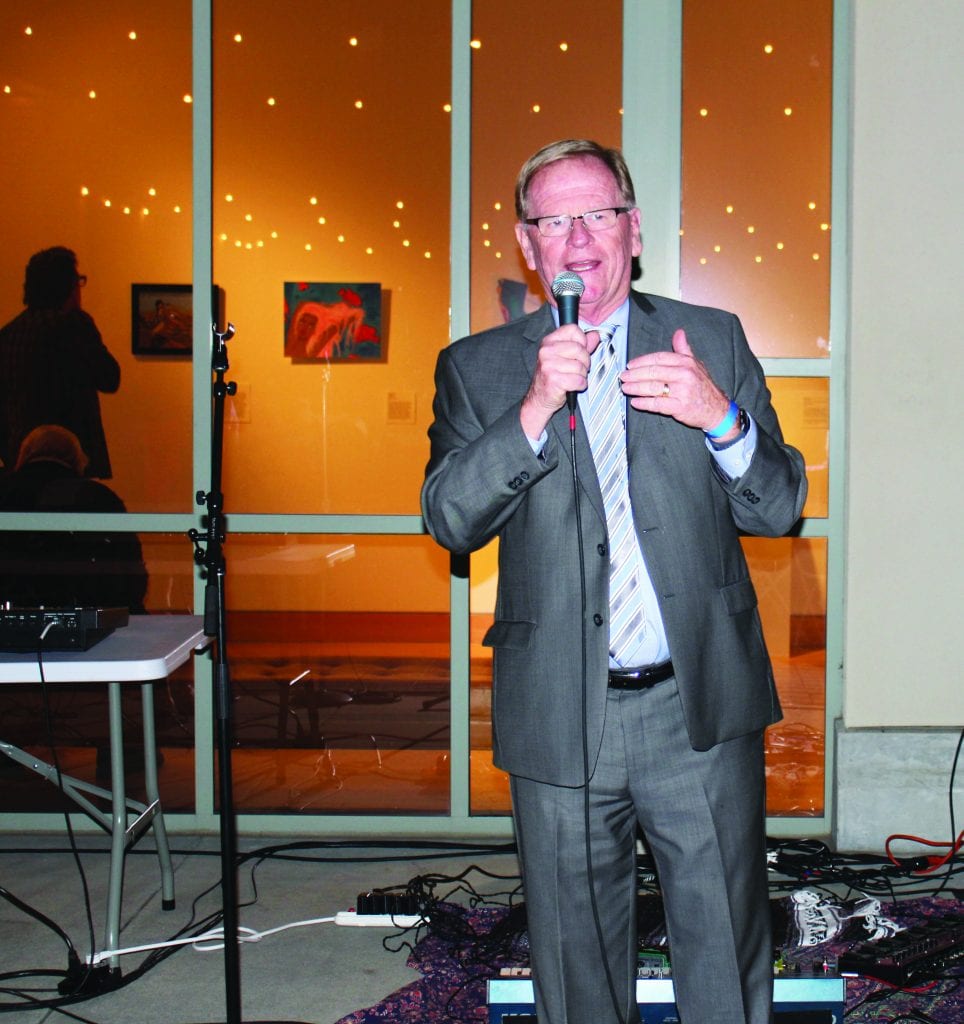 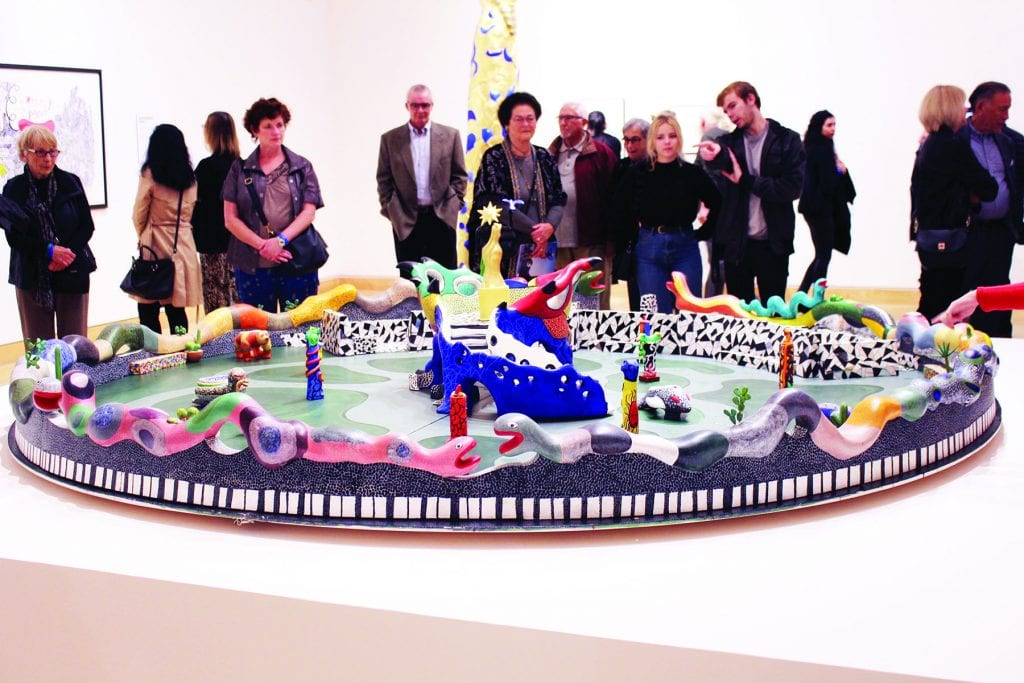 A scale model of de Saint Phalle’s Queen Califia’s Magical Circle at Kit Carson Park. The real life and life size version is the only American sculpture garden and the last major international project created by de Saint Phalle before her death in 2002. This piece is part of the exhibit now showing at the California Center for the Arts, Escondido’s museum.