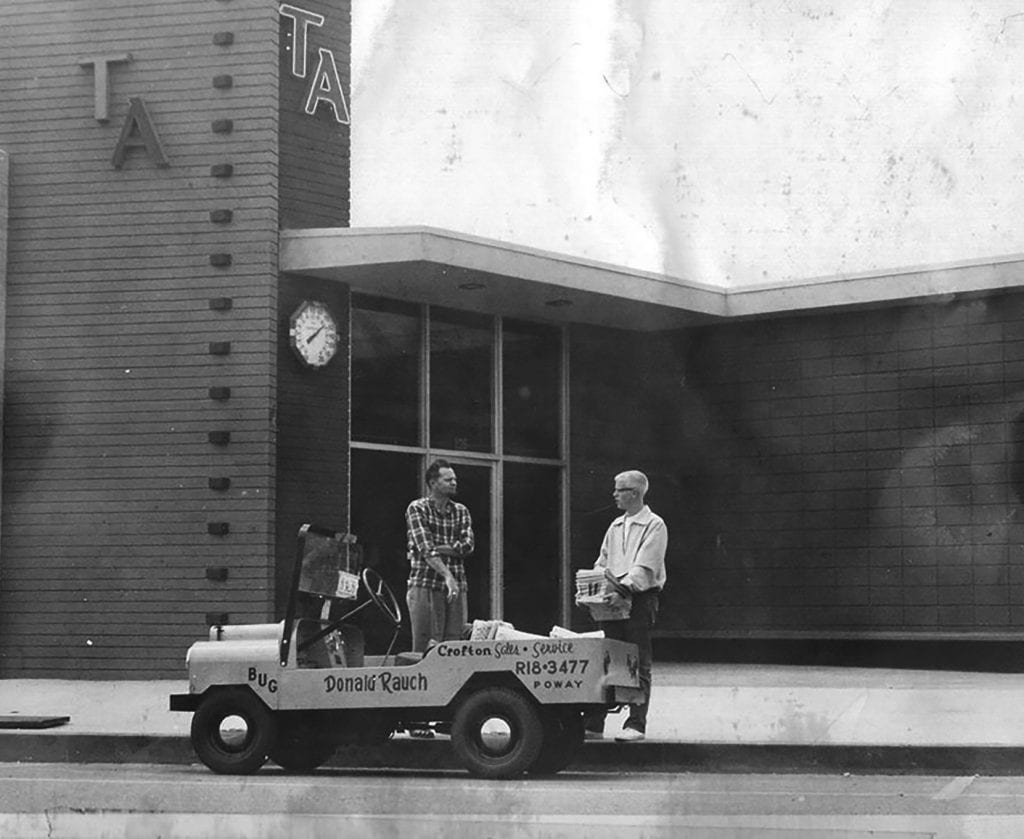 A photo of the old T-A building from more than 50 years ago, posted by local resident Jim O’Neill on the Facebook page I Grew Up in Escondido.

Just about the time I think we are at the peak and ready for the downturn, or as many like to call it flattening the curve, BAM! along comes another spike as has happened a few days ago. Yes, COVID-19 again. I mean it is the topic that is headlining all news. But, on the plus side, Escondido is still in the group of San Diego County cities with a lower number of reported cases and we are maintaining past percentages not having any unusual spiking in cases. Actually, North County cities make up seven of the lowest nine. I guess that is something to salute.

The other day I read an op-ed piece both in the U-T and the T-A by our State Senator Brian Jones. The headline, “Californians must ensure infringements on liberties during pandemic are only temporary.” He began with a quote by President Ronald Reagan which led me to remember another quote from Pres. Reagan. “Nothing lasts longer than a temporary government program.” I sure as heck hope he was wrong as it relates to the current situation where we are being sequestered in our homes under the fear of being fined for disobeying orders.

Don’t get me wrong, this pandemic is as real as it gets but I believe government intrusion into our lives is a bit of an overreach. We are reaching the point of “quarantine fatigue” as we are now beginning to see public civil protests. I suppose if we had a beach we would also be staging protests. The other day I wanted to relax outdoors and drove to Kit Carson Park. Sorry, not open for business. All of our city parks are closed. It was an eye opener to see the Westfield North County Mall parking lot almost empty. Nice segue here to talk about local businesses again.

If a business owner can operate observing “social distancing” (I hate this term) then he/she should be allowed to be open. Not all businesses can operate with a limited customer base such as restaurants but those who can should. Another segue. In the 1960’s there was a carhop on Grand Avenue. Carhops were very popular for a few decades as most had good food fast not fast food. And you didn’t have to get dressed up to go out to eat. Carhops would be perfect in the current normal. A restaurant with a decent sized parking lot can make a quick transition. Note to Planning Departments…it’s OK.

Quick note on the obscene amount of government grants under the guise of payroll protection to small businesses finally being returned as a result of being found out what louts they are. Here are a few of the so-called small businesses who applied for and received PPP funding Harvard University? Shake Shack? Ruth’s Chris? Seriously? LA Lakers???? I did not know a sports franchise was considered a small business—silly me. Others are also returning funds so the little guy can survive. This I believe is endemic with government bailouts where the legitimate small business gets screwed.

Oh, if you receive emails regarding a vaccine or cure for COVID-19 please do not prove P.T. Barnum right when his business model included this statement. “There’s a sucker born every minute.” There is no vaccine for this virus as yet. Thankfully, there have been arrests of these charlatans.

This is interesting. Local resident Jim O’Neill has posted photos on FB, I Grew Up In Escondido, showing what Escondido looked like over 50 years ago. One photo was of the old Ritz Theater when it was destroyed by fire in 1950. The historic marquee announced the main feature was ‘Fireball’ starring Mickey Rooney. Prophetic? I went to the Ritz once in 1974 and when my shoes stuck to the carpet at the snack bar I never went back. Obviously the Ritz was rebuilt and is now being repurposed to an exciting new venue after having been closed for over 20 years. Thank you Rev. Spivey.

For you fellow personalized license plate people and I know of at least one here are this week’s entries. ISLOWZZ, I have no idea. SMLRFAM.

One response to “Reaching quarantine fatigue”