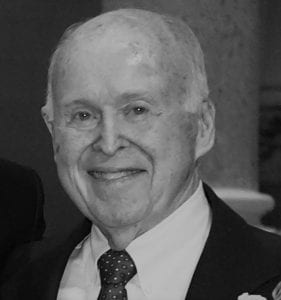 In 1935 his family settled in Fort Wayne, Indiana where he and his brother Donald Tobin attended St. Jude Elementary School and Central Catholic High School, graduating in 1945 as the senior class president and football team captain.

His future wife, Rose Ann (Rosie) Nassenstein, was class vice president. Mr. Tobin graduated from Indiana Technical College (ITC) in May 1948 with a degree in aeronautical engineering. He interned at the Northrup Corporation in Hawthorne for one year — participating in the design and testing of the YB-49 Wing Bomber, laying the groundwork for what would later become the B-2 Spirit Stealth Bomber in 1990.

Mr. Tobin moved his family from Fort Wayne to Los Angeles in 1959 when he accepted a position as manufacturing manager at the Parker Seal Co.  In 1962, following a promotion to general manager, Mr. Tobin relocated his family to Lexington, Kentucky where his second son, Patrick was born in 1963. In 1966 after his promotion to president of Parker Seal Co. Mr. Tobin returned his family to Los Angeles where his third son, Kevin was born in 1971. During his tenure at Parker Seal Co., he designed and provided the unique door seals for the NASA Mercury and Gemini missions. These are on display at the Smithsonian Air and Space Udvar-Hazy Museum. He later also provided seals for the Apollo missions. Under Mr. Tobin, Parker Seal Co. became the world’s largest producer of rubber seals.

In 1970, he left Parker Seal to start REAL Seal Co. because he felt with his own company he could provide a better family life. He was a naturally gifted engineer and an astute businessman. He was able to leverage his many European contacts to get REAL Seal flourishing in just a few years. The entire Tobin family worked in the business. In 1978, Mr. Tobin moved REAL Seal and his residence to Escondido, and in 1986, to San Diego where he and Rosie joined the Immaculata Parish so that Kevin could attend the local Catholic high school University High.

In 2000, Rosie was diagnosed with breast cancer and Ray became her dedicated caregiver for the rest of her life. After an additional bout with ovarian cancer and a return of breast cancer, Rosie passed away in 2008. Their marriage of 58 years was an unusually happy one. Ray established the Ray and Rosie Memorial Scholarship Fund at Indiana Technical College as a memorial to Rosie.

Mr. Tobin retired from the day-to-day operations of REAL Seal by 2000 but remained board chairman until his death. Mr. Tobin is survived by his 6 children, 13 grandchildren and three great-grandchildren.  He was preceded in death by his older brother, Donald in 2012.

The funeral Mass will be held at the Immaculata Church in San Diego on March 10 at 10 a.m. followed by a reception. The inurnment will be at the San Luis Rey Mission Cemetery later that day (family only.)

Online condolences may be posted at www.legacy.com/obituaries/trident-society/obituary.aspx?n=Raymond-Tobin&lc=2859&pid=188048697&mid=7747695&locale=en_US.