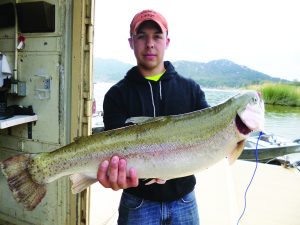 Evan Esansy is one of the Whopper Contest leaders for February. He is shown here with a 12.8-pound trout.

This week there will be a 1,500-pound planting of Rainbow Trout. The last plant was on February 22.

To protect Wohlford from invasive exotic Quagga mussels, there is a ban on private water craft and equipment which includes; private boats, canoes, kayaks, float tubes, trolling motors, fish finders, anchors, and other equipment that contacts the water.

The lake is offering $20 all day motor boats to seniors on Tuesday and Thursdays and to active military on the first and third Saturdays of each month.

Permits and Boat Rentals are now being issued at the Ranger Station. At present rangers are limited to cash transactions only. They do not sell fishing licenses, bait, or tackle so anglers must acquire these essentials elsewhere prior to their visit.

The trout bite has rebounded strongly and limits and near limits are being reported on Senior Shoreline, Willow Cove, and in Oakvale Cove. Big fish of the week belonged to Evan Esancy of Richmond Maine and tipped the scales at a whopping 12.80 pounds. It was caught from a boat fishing off the Southern Shore using a nightcrawler on the day of the plant. A very close second went to Tim Arnold of Fallbrook who landed a 12.60 pound trout the day before using a crankbait at the East Buoys.

Crappie are beginning to appear in small numbers. More should emerge in the coming weeks. Crappie prefer the cover of shade and are most often caught using crappie jigs or live golden shiners.

Largemouth Bass can be found around structure. Jason Kordan of Torrence caught and released an 8.30-pound bass Wednesday caught on a swimbait off Bass Point.

Each month Whopper Contest winners in four categories are awarded a free fishing and boating permit. For information on the contest or fishing conditions,  contact the Ranger Station at 760-839-4346.