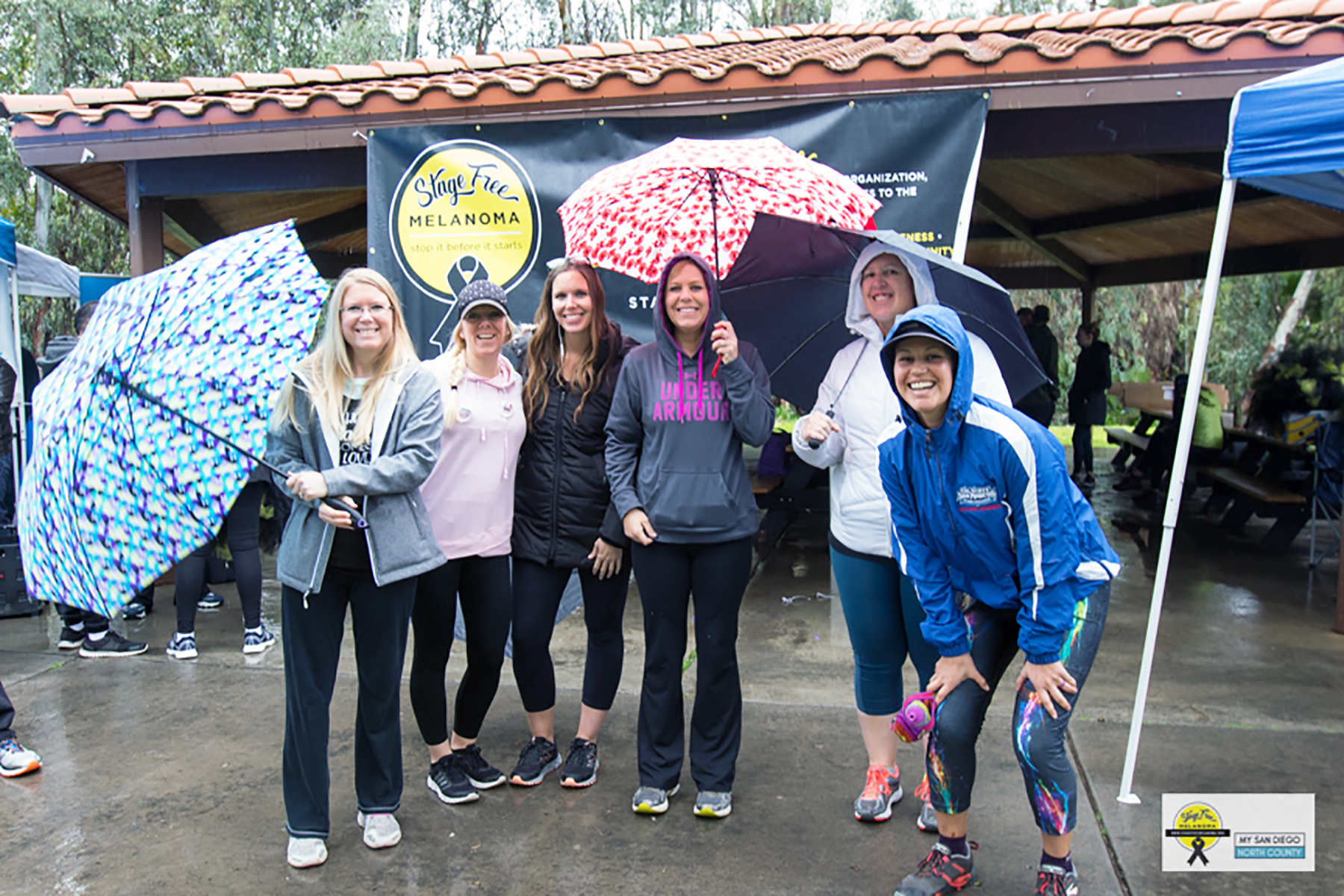 Saturday about 100 participants in the Stage Free Melanoma 5K walk/run walked through picturesque Kit Carson Park to raise about 3,500 to fight melanoma by raising money to set up a bus as a mobile treatment facility.

Eric Martin, 37, has been battling melanoma cancer since he was 29 years old. It started out as a spot on his back that didn’t get checked out for a few years and ended up as 23 inoperable tumors in his liver, that has in the past years spread all over his body including his brain.

Martin doesn’t want anyone else to have his story. So he decided to convert a school bus into a mobile melanoma cancer screening clinic, which when completed, will travel to events and provide free screening done by a licensed dermatologists, and help raise awareness.

Lisa  Scarpello and Don Martin of Valley Center were in charge of getting the bus to the event. It almost didn’t happen.

“When we arrived at the property where we store the bus, it wouldn’t start! What happened? Upon further inspection, we found that someone had helped themselves to one of the commercial batteries,” said Scarpello. “Thankfully we were able to get one locally and still get to the event only an hour late. It makes my skin crawl that someone actually came onto the property uninvited and took what wasn’t theirs. But what I find most incredulous is that someone actually stole something from what is very obviously not your ordinary bus for personal or commercial use. It’s a cancer bus! It must be used for something very worthwhile!” 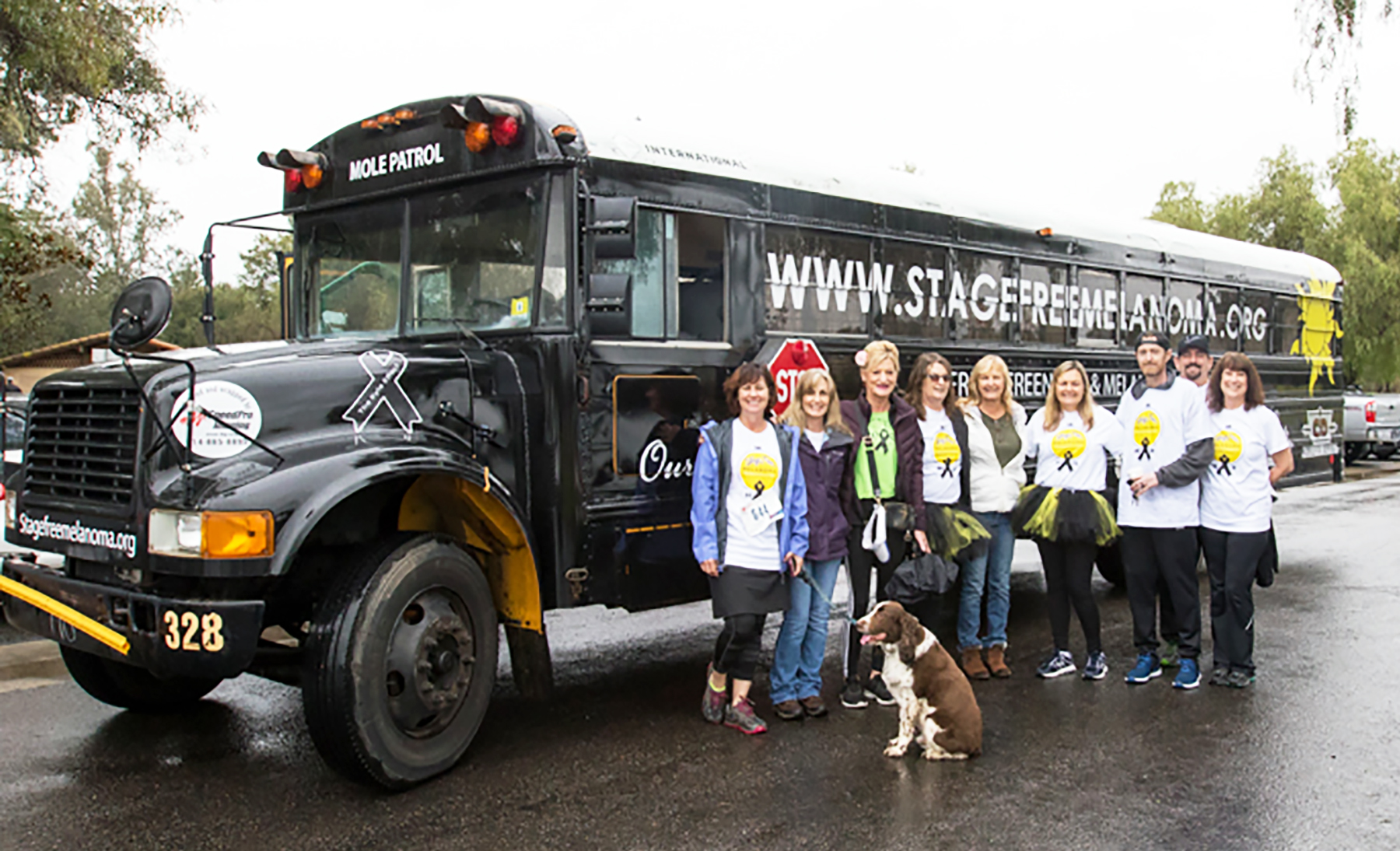 Organizers of Stage Free Melanoma gather around the bus that Eric Martin wants to turn into a Mobile Dermatology Clinic.

She added, “While most people in Eric’s position would be concentrating on their own illness, instead he is thinking about how he can help others not to have to go through what he is going through.”

Penny Martin, Eric’s mother said, “Melanoma is one of the deadliest cancers there is. One person dies every hour and there is no cure. My son has been fighting for almost eight years and he has failed 12 treatments. It just continues to grow. There is not near enough awareness or education about this horrible cancer and he wants to get awareness out there to help save lives. He came up with the idea about 8 months ago to start a nonprofit organization to raise money. He had come up with the idea that if he could find an older retired school bus he could turn it into a mobile dermatology clinic. The transformed bus would drive around San Diego County and give free skin checks by local dermatologist and share information on melanoma. But to do this he would need money.

The foundation (nonprofit organization ) became official in June 2018 and it is called Stage Free Melanoma. Martin found a bus in New Jersey. That was the only place he could find one that could be donated. So in July him, two friends and his oldest son flew out from San Diego to New York to get the bus and drove it back to San Diego.

StageFreeMelonama.org is a non-profit foundation, set up to make Eric Martin’s vision become a reality. The website also documents his story. They’ve come a long way with cancer cures but there is still a very long way to go. 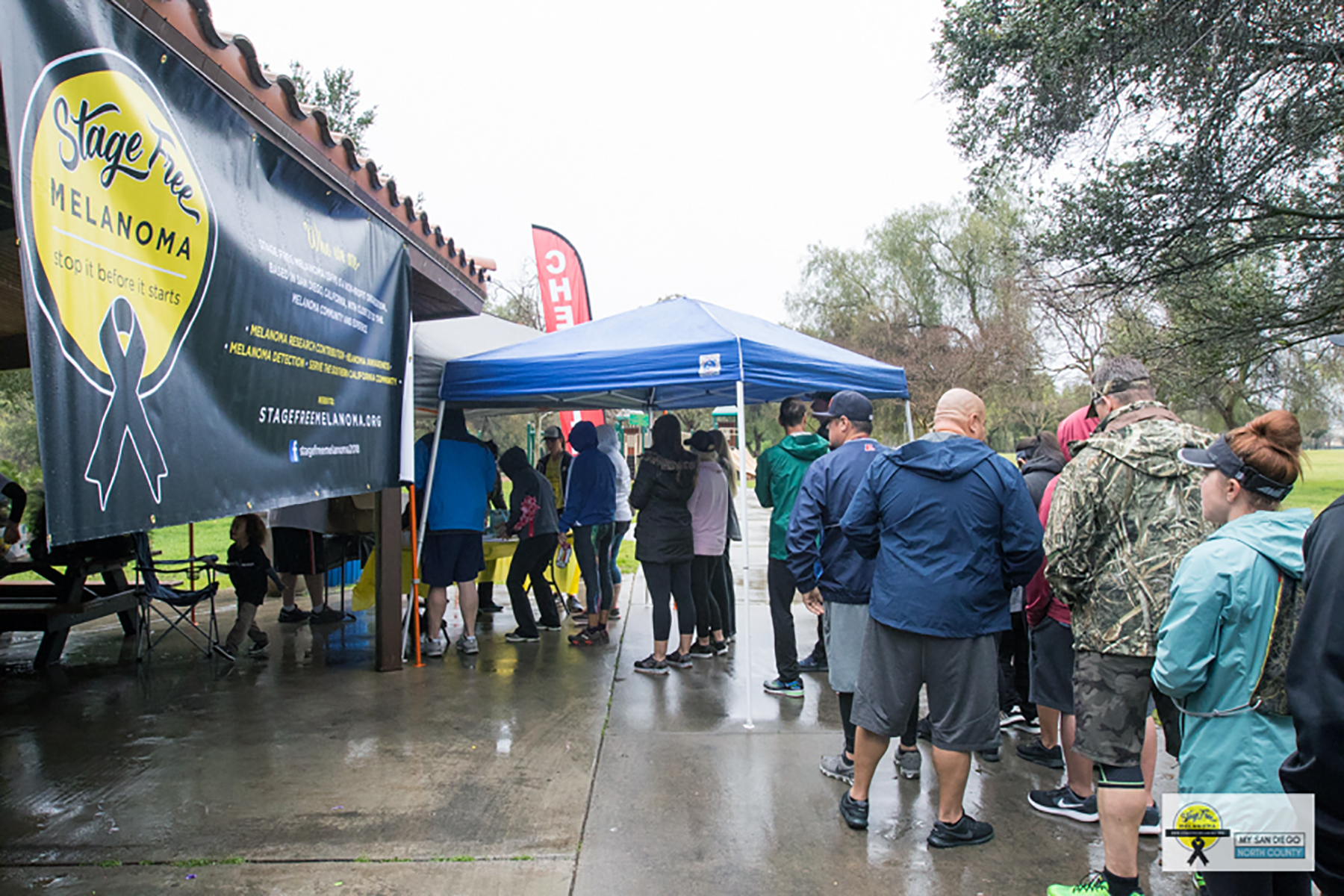 Despite the rain about 100 signed up for the 5K. Photos by David Zumaya, My San Diego North County 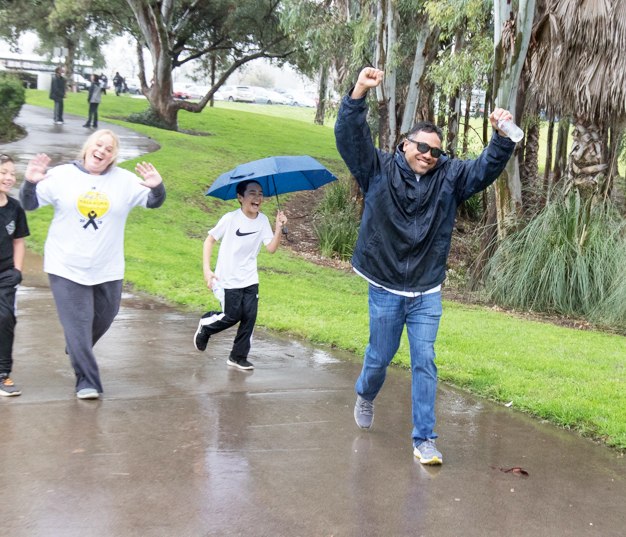 5K participants having fun in the rain. 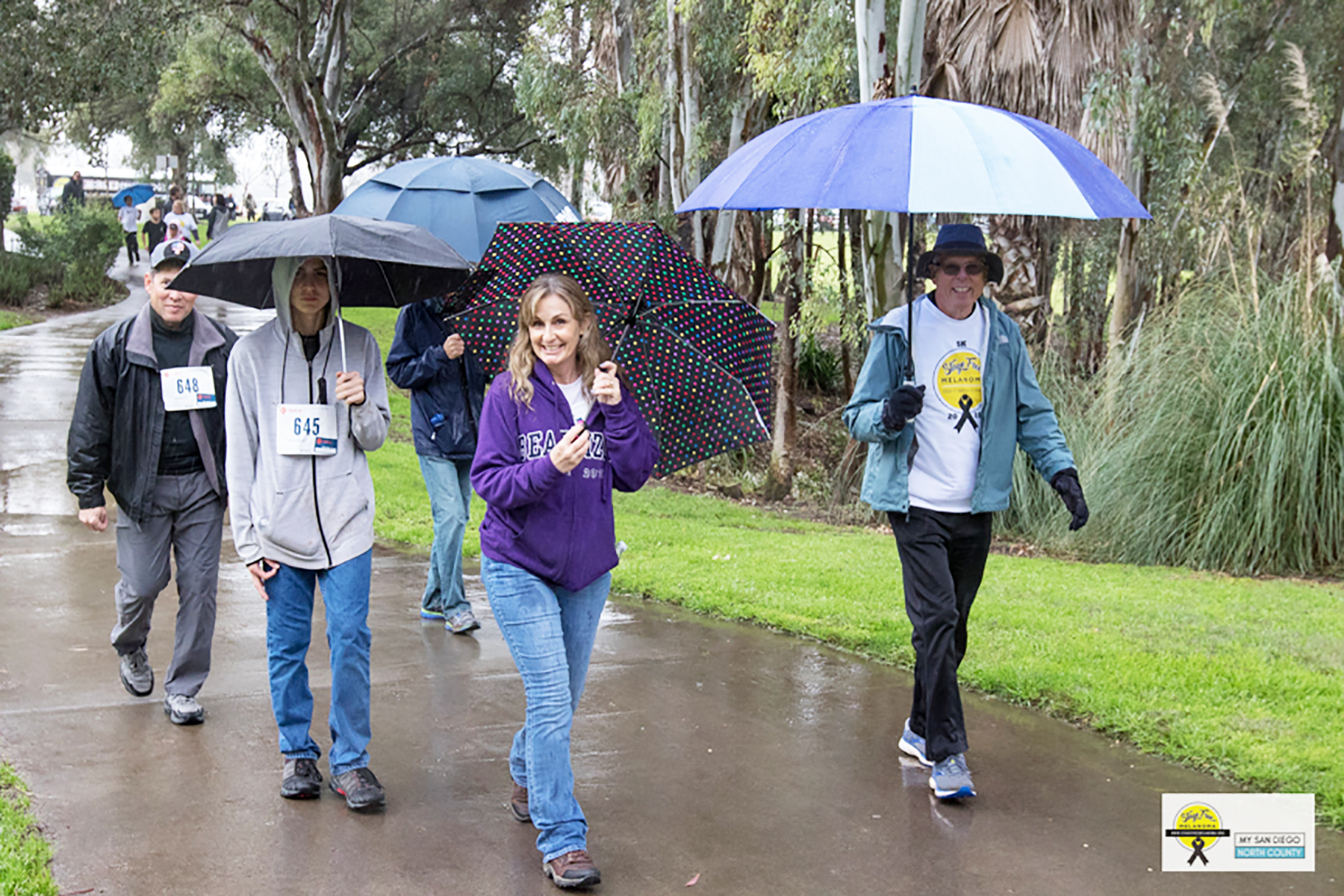 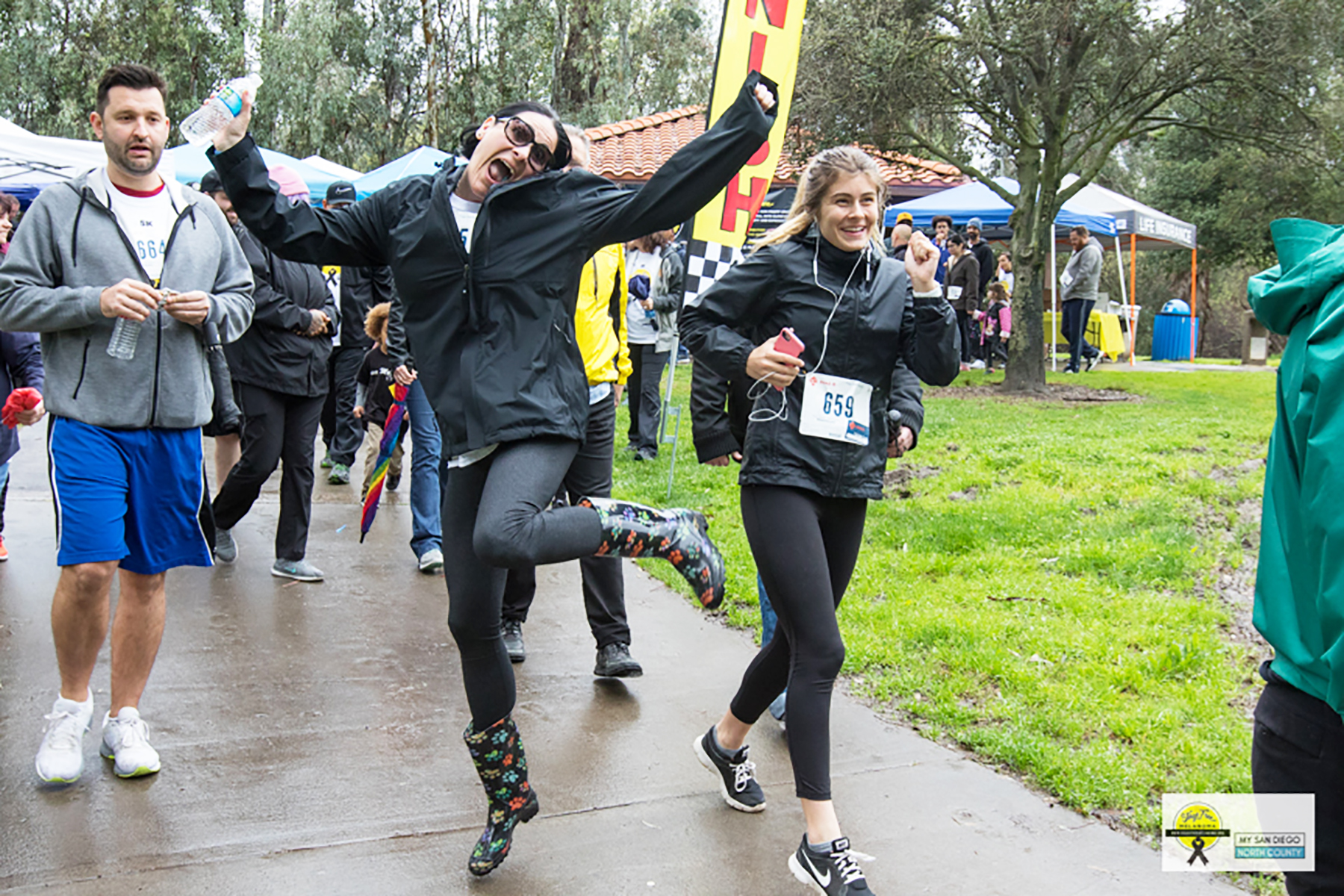 photo You don’t have to be “Singin’ in the Rain” to have fun in the rain. But raising money for a good cause doesn’t hurt either.credit, David Zumaya, My San Diego North County