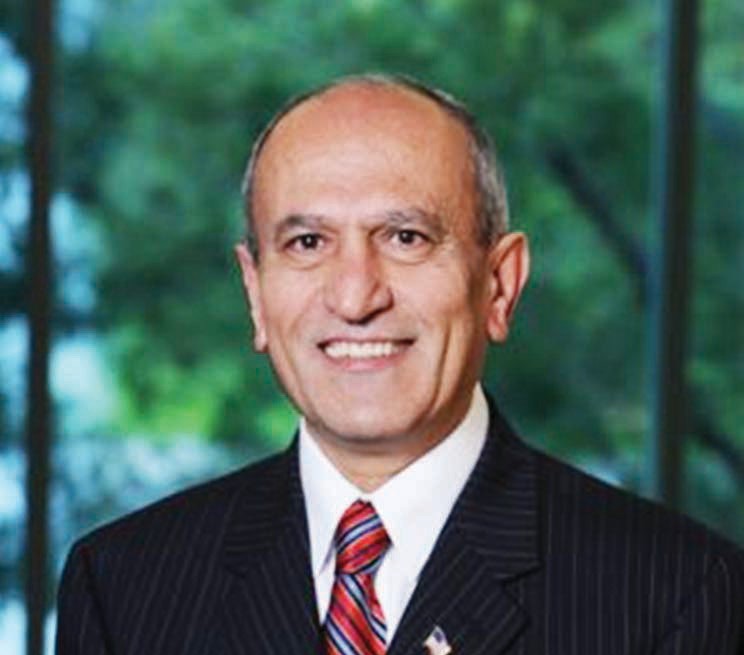 Escondido Mayor Sam Abed is run­ning against Kristin Gaspar and Dave Roberts, the incumbent San Diego County Supervisor. And it looks like the only thing either of his opponents have over him is that Kristin Gaspar is much better looking than he.

Gaspar is tall, blonde and, since 2014, the mayor of Encinitas.

Not that Abed doesn’t have his at­tractions. He is open, courteous and lev­el headed in a manner that displays an old-world charm. Born in Lebanon, he moved his family to the U.S. got a job with IBM International, moved to Es­condido and started a business, became a naturalized citizen in 1990.

But he can display a quick temper. At one point in the following interview, he was asked about Gaspar’s backing and chances to win the three way race for District 3 supervisor. He flared a bit and said:

“Gaspar is a young, elected mayor and she needs to fix her city. Her city is run by unions and activists and she has not done anything. We’ll give her credit for banning plastic bags and plastic cups. The city really needs to get their priorities straight.”

Times-Advocate: So your website said you won with 60 percent of the vote with 40 percent Republican voter registration in a three way race with two Republican candidates. What race was that?

Abed: That was the last election for mayor, 2014. That really reflects the crossover of votes. It’s significant. It’s a landslide really. I think that would re­flect the level of support across the polit­ical board. When normally you get about 85 to 90 percent of the Republican vote, when you get 60 percent that means you have got 35 percent of the independents, Democrats and Hispanics. I think that’s because of the economic policies we have had, the neighborhood achieve­ment.

I think that’s significant for any fu­ture election that I will get these cross­over votes.

T-A Did you campaign hard?

Abed: Yes, I did, I walked the entire city. I’ve been here (as a councilman first) since 2004. I won my first elec­tion against an incumbent Republican, Tom D’Agosta. So when I was in my first mayors’ race we won by seven or eight points. Then the last election was a big landslide.

T-A: You are Mr. Escondido, so how are you going to do in the rest of the Third District?

Abed: I’m going to bring the same values and the same approach to gov­ernment. (Showing a chart that repre­sents Escondido’s fiscal restraint dur­ing his mayoralty) This tells you what our accomplishments are. We believe these are important issues to the vot­ers and I think we can implement them. When you see this budget turnaround, how many cities can brag about this?

I ran on a balanced budget and in six months after we cut down the gov­ernment size 20 percent. We had 1,000 employees and scaled it down to 800 employees and we created private sector economic growth. (Pointing to chart) This shows a 16 million dol­lar deficit. This was four years before I was elected mayor. I was out-voted here. And after I became mayor we had an $8 million surplus. Sixteen (deficit) to $8 million is a $24 million swing.

The economic activity raised $12 million more in sales tax, the Westfield shopping center, the downtown, the Lexus dealership, the Vintana (restau­rant), the Carmax, the Auto Parkway.

As we speak there is a major projects update. This is 25 ongoing significant projects that are being built or are go­ing through the civic process. They are close to $1 billion in value and I think we are the only city that has economic activities on that scale.

We also saved $17 million (for) an emergency reserve fund. Our finanan­cial turnaround has led the rating agen­cies to upgrade our (municipal) bonds to AA minus. Once you have this good bond rating you are borrowing money at a cheaper rate and that will save the taxpayers hundreds of millions of dol­lars in the long run.

T-A: What were some other strate­gies in your financial plan?

Abed: Pension reform was very im­portant I campaigned on it. It was the only time the police and fire unions campaigned against me. Even with that we won big, because I believe there should be a balance between the tax­payers and the labor unions. We dem­onstrated to them that without financial stability you’re not going to save your jobs or even your benefits.

I believe there was a turnaround by the police. This morning I was en­dorsed by the Hispanic Chamber of San Diego, 1,000 members. Because they believe in economic prosperity for everybody.

T-A: When did you decide to run for the supervisor job?

Abed: When the scandal came out about Roberts. I wasn’t thinking about it. I was a happy mayor of a large city, Escondido is the largest city in District 3. When the scandals came out and we gave Supervisor Roberts a chance to address them, he did not. We gave him 30 days to address them and he did not. And I said, I cannot allow Escondido to be governed by a county supervisor that is not fit to serve. It’s close to cor­ruption what we have seen.

T-A: How well known are you out­side of Escondido?

Abed: I have more experience in county government than my two oppo­nents combined.

And that’s business experience. I had a private business for almost 28 years. Very successful. We made the Ameri­can Dream in a big way. I’ve served on SANDAG, the San Diego Association of Governments. We’ve spent $1.2 bil­lion on infrastructure. I’ve been there the past nine years. Dave Roberts has been there for a couple of years. He didn’t show up last year for any meet­ings.

My other opponent Kristin Gaspar, was denied by her own counsel not to be on SANDAG. Normally a mayor would get on SANDAG, but Gaspar was denied because of politics in En­cinitas.

Also I have the North County Trans­portation District, four years on the board. And the Economic Develop­ment Corporation for five years. You’re talking about 18 years of county expe­rience. My opponents don’t have that.

Also the (five North County) May­ors (from cities along the 78 Freeway) met to start the Innovate 78, to grow the 78 corridor together. That’s a major accomplishment itself.

T-A: How would you have voted on the Lilac Hills Development (a pro­posed 1,176-unit Valley Center hous­ing development)?

Abed: I’m not familiar with the de­tails. In Escondido I have a track record of supporting quality projects. My po­sition on development is very simple. I look for quality not quantity. I look for projects that would work with the community, that are acceptable to the community, but more importantly they would have to mitigate all of the im­pacts.

T-A: So you would be leaning to­ward quality instead of the quantity on that project?

Abed: I need to look thoroughly through the mitigation process. For me, it’s not the number of homes. It’s the mitigation of the significant impacts, the traffic, the noise, the police, the fire, all these things, the environmental miti­gation. You need to meet those, if you don’t, it doesn’t matter how many home you’ve built.

T-A: I read that you used your city website that had a link to your campaign site and you had to take the link down. Tell me about that.

Abed: This is an opportunity for the residents to know more about me as a mayor and as a candidate. The threshold is that there was zero cost to the taxpayer (to include the link on the city website). If you go to the website and you click on it and the city (said it was OK)

Abed: As per the city ordinance we are allowed to have the mayor and city councils link to the website. The code is very clear. It clearly says the city can pro­vide links to the city council’s (personal) websites.

I’ve been vetted by the Mexican Ma­fia, the liberal activists, by the unions and they didn’t find anything so now they’re going around finding little silly things. That’s good for me. I’m happy.

T-A: OK. Another thing the other side said is that you promised to serve the city for four more years. Response?

We have a great guy named Joe Gar­cia who we are going to get elected. We (want to) turn the city around with five like-minded, pro-business conservative thinkers that will support our vision and our goals and we have hired city manag­ers to create the success we have had.

T-A: How much campaign money have you raised?

Abed: The success we have had was reflected on the amount of money we have raised. Because people trust me and they want me to serve in a higher office. I raised $252,000 that’s back-to-back 275,000 for the mayor’s race. We have raised half a million dollars in a span of two years because people trust me and we have delivered on our goals and the city is on the right track.

We have a very capable council and they will continue on with the successful policies.

T-A:How is Roberts doing on his campaign fundraising?

T-A: Are you fairly confident that you are going to win this?

Abed: I am very confident that I am going to win this. When you look at the experience, confidence and trust, I have accomplishments and experience will make me the front-runner. Roberts doesn’t have that.