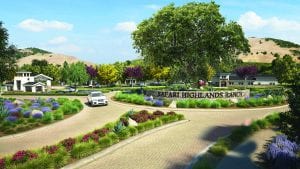 An artist’s conception of the village core of the Safari Highlands project.

The public comment period has begun for Safari Highlands Ranch (SHR) a proposed $450 million development by Concordia Homes on 550 luxury house lots east of Rancho San Pasqual. As the name would imply, the development is only a couple of miles from the San Diego Safari Park.

This is a project where the developer, Concordia, is requesting that the city of Escondido annex land that it is currently in the city’s sphere of influence.

Safari Highlands Ranch is undergoing review under the California Environmental Quality Act (CEQA) after which time the city council will vote on it. The developer expects a final decision by 2018, and if the council approves, construction beginning in 2021, with full build out in five to six years.

The proposed home lots will range from 10,000 square foot to one acre minimum. Seventy percent of the total property will be set aside for permanent open space. There will be nine miles of trails that will be open to the public, although they won’t as yet link to any established trail system. They could eventually be connected to regional trails, but that would require a donation of private property.

The Draft EIR has a 52-day public review period that started on October 16 and ends on December 7, 2017. The Draft EIR and appendices have been posted on the Safari Highlands website link on the city’s website:  www.escondido.org/appendices-for-safari-highlands-.aspx

The project says the developer will create a new, alternative northern emergency evacuation access road and a built and equipped 7,000 square foot fire station for the Escondido Fire Department, at no cost to the city.

The developer claims, “Property taxes generated by the new homes will provide the majority of funding needed to support ongoing operations at the fire station.” It will also, says the developer, up the safety of surrounding residents by providing a functional fire station in their midst.

It will also provide about $3 million to the San Pasqual Union School District (SPUSD) for capital improvements through development fees.

The developer asserts that it will “maintain the current level of service on the nearby roads and will provide approximately $4 million in fees for additional improvements outside the project area. In addition to these fees, specific enhancements will include a new traffic signal at Rockwood & Cloverdale roads, restriping to add a second westbound lane on Rockwood Road turning south at the intersection, and a median along Rockwood Road from Cloverdale Road ending before San Pasqual Union Elementary School,” without eliminating any parking.

A new signal and turn lane will be installed at Hwy 78 & Summit Road, and the intersection of Hwy 78 & Cloverdale Road will be reworked to ease 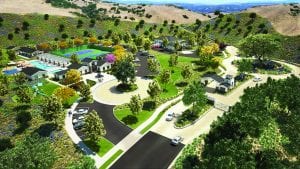 A bird’s eye view of the project’s entrance and some of its amenities, such as a clubhouse, tennis courts and swimming pool.

the flow of traffic. The developer also proposes to design and pay for a new drop-off and pick up improvements including additional parking at the school to reduce congestion and increase safety.

Part of the project would be a benefits package to enhance the existing Eagle Crest Golf Course. Of course, residents of the new development would then be able to join the country club—without Concordia having to build a new one from scratch.

Concordia proposes to build or fund a new 4,000 sq. ft. clubhouse designed to include locker rooms, bathrooms indoor/outdoor dining area, pro shop, bar and restaurant. Currently the residents are using a trailer for the clubhouse.

“The project team will work with the Eagle Crest golf course to develop a signature hole for the course at Hole 14,” says a spokesman for Safari Highlands Ranch. The design would include a water feature with a small waterfall.

The project will also purchase 275 new annual memberships to the golf course. It will also contribute $200,000 to be used for additional course improvements.

The developer says this increased daily play associated with 550 new luxury homes, “will result in a thriving, well-maintained golf course to be enjoyed by all.”

“We are supportive of Safari Highlands Ranch because of the comprehensive benefits they have proposed for the Eagle Crest Golf Club and our community,” said Tim Walker, vice president of One Stone Golf LLC, owners of Eagle Crest Golf Club. “This is a critical opportunity to enhance our existing, challenging course layout with a new signature hole and create attractive new amenities for our golfers and neighbors. The new clubhouse, with a full-service restaurant and lounge, will create a convenient community gathering place and dining option for San Pasqual Valley residents without having to drive into town.”

Carl Skaja, a resident of the Rancho San Pasqual neighborhood told The Times-Advocate: “As a long-time resident of Rancho San Pasqual and a native of Escondido, I see Safari Highlands Ranch as a positive addition to our community and the entire region.  The success of Safari Highlands Ranch means a thriving future for Eagle Crest Golf Club, a needed fire station for the San Pasqual Valley, and benefits for our kids at San Pasqual Union School. It will also bring jobs and working families to Escondido. Because of these benefits, support of the project by my fellow neighbors grows each day.”

Note: The Times-Advocate is committed to providing both sides of issues affecting the community. Persons who oppose Safari Highlands Ranch are invited to contact the editor at editor@times-advocate.com so that an interview can be arranged.