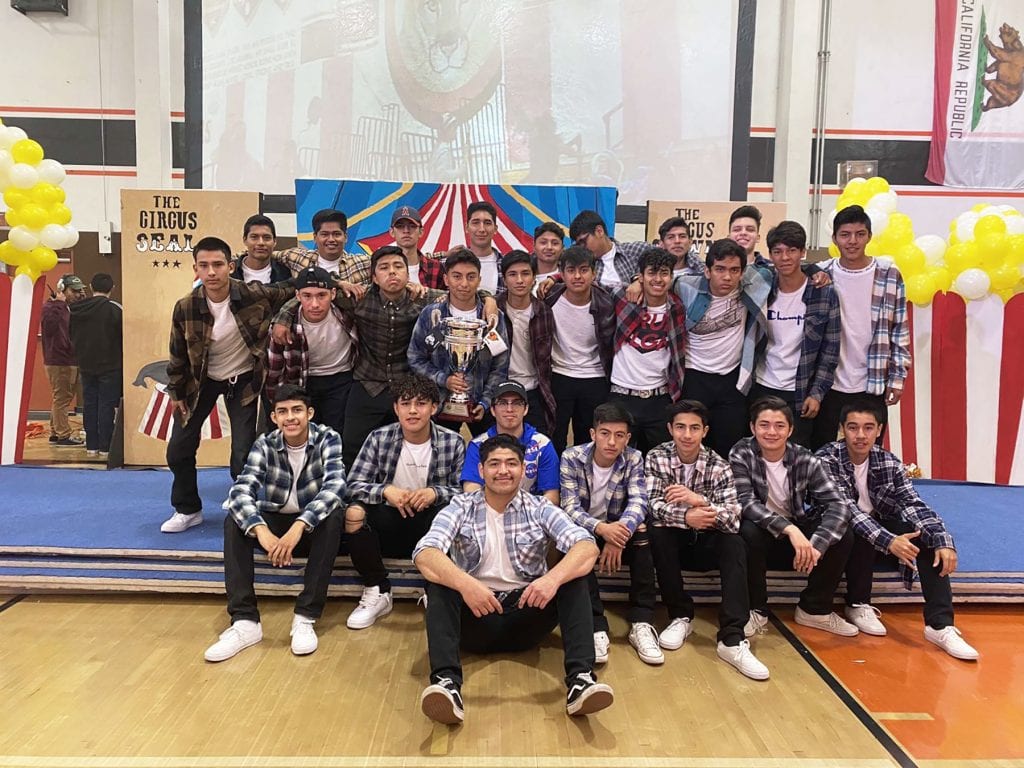 The tangible bonding of the Escondido soccer team is a big reason for the club’s impressive success.

To say that the Escondido High boys’ soccer team has plenty going for it wouldn’t even begin to tell the story.

Among the many assets of the rampaging 16-3-5 Cougars are the following: they’re fast, they’re smart, they possess tangible chemistry, they’re hungry, they believe and finally, they possess a scoring machine who is arguably the best player in San Diego County.

Entering this season, compelling head coach Michael Mendoza had three primary goals in mind for his club – to be near the top of the Valley (League), to qualify for the CIF playoffs and to win a tournament. You can check off all those items as having been accomplished.

The question now becomes can the Cougs make this season one of the most memorable in team history by chasing down a Division 3 title? All signs point to that becoming a real and distinct possibility. “I told the players at the start of the season that for us to do well we really had to come together as a unit,” says Mendoza. “Well, that’s happened. This is a tight group that pushes each other to be their best, hangs out together and really motivates one another.”

Because they are seeded No. 1 in the Division 3 playoffs, the Cougars were given a first-round bye and will next be back in action this Friday against the 8th seed Sweetwater, who took down Rancho Buena Vista 5-2 on Tuesday. For the first time in nearly a decade, the Cougs will be hosting a playoff game and Mendoza relishes having the chance to play before a home and partisan crowd. He also figures that getting an extra day or two of rest because of their seeding might very well work to his team’s advantage. But he feels no added pressure nor does he expect his team to feel apprehensive now that the postseason has arrived. “Hey, we’ve already accomplished some really good things,” he explains. “To be honest, we have exceeded my expectations. Right now, anything else I would consider to be gravy.”

But when you have a bona fide superstar in forward/striker Damian Flores, anything is possible. The sensational sophomore leads the San Diego Section in goals with a whopping total of 31, having scored in every game but one. He is big, great at creating space, able to masterfully read the game and once he has an open chance, he is exceedingly deadly. The dude just doesn’t miss with what can be a rocketing shot. “The ball just seems to find him,” adds Mendoza. “He has a very high soccer IQ and the rest of the guys really respect him because of how hard he works. Soccer is truly his life.”

Having played since he was four years of age, Damian has seen a brother ascend to the semi-pro ranks. Ultimately, Flores plans on playing either in college or perhaps even making a living out of toiling at the sport that has totally captivated him.

But as dominant as Flores can be, he totally appreciates and knows the importance of having talented teammates and wingmen surrounding him. In Angel Cortez, the Cougars have a terrific defender who is heady, fast as hell and displays plenty of all-around upside. According to his coach, Cortez is considered to be the backbone of the Cougar defense.

Another huge contributor to the Esco cause has been Yahir Diaz, a speedy forward who is next to impossible to keep up with. A talented playmaker who can deliver exacting passes, Diaz has been the perfect compliment to Flores, with many of his artful 16 assists ending up on the foot of his celebrated teammate.

Like Cortez and Diaz, Cesar Bahena (8 goals) is yet another sophomore of note. A gifted midfielder, Bahena is a smooth operator with a model attitude, quicks and a sparkling dribble. He too has the enviable capacity for being an all-around player.

In senior Alex Palacios, Esco has a potent scorer (8 goals) and a conspicuous team leader. A great kid, Palacios embodies an admirable work ethic and when it comes to contested aerial balls, Alex can get after it and rarely loses out. When at his best, Palacios can join with Flores to form a most intimidating attacking duo.

Then there’s the always smiling captain, Willy Felipe. A passionate player, Felipe (9 assists) is a joy to be around. A high character guy, he’s a committed competitor who can both score and dish. Splendid at dribbling and good on the ball, Felipe is a mid who can get it done.

Other players worthy of mention are Diego Rios and Alfredo Reyes, hardnosed customers who Flores considers to be a couple of the toughest guys he’s ever had go up against.

As far as the goaltending is concerned, the Cougs are blessed with three competent performers. Bryan Osornio offers a tall, physical presence while Elton Martinez is another senior known for his confident attitude and readiness. Meanwhile, Juan Martinez is a goalie who exhibits tremendous footwork and superior dribbling skills. Though as of Tuesday, coach Mendoza hadn’t made up his mind as to who would get the call against Sweetwater, the smart money says Juan will occupy the net come Friday.

A true believer that his team is capable of competing against anybody in the County, regardless of the division, Flores is looking forward to the test of the postseason. “We’ve got nothing to lose,” says the standout. “The defense is really starting to click and step up and I know we can score goals. We have a lot of young guys on this team and we’re hungry. I really expect us to keep things going.”

A final point that must be stressed is that a number of the Cougars have played together since their youth soccer days and that kind of bonding and familiarity can’t be underestimated. It isn’t an exaggeration to state that a unique and perceptible brotherhood exists among the Cougars and that kind of connection can carry a team a mighty long way.

Just a year ago the Cougs didn’t even make the playoffs primarily because Esco was in a transitional phase with a lot of a youthful players gaining valuable varsity experience. But Mendoza, along with his able assistant Mariza Lopez, has done a tremendous job of creating a culture of discipline, commitment, hard work and confidence. The coaching staff has also excelled at fostering an atmosphere of real comradery.

To date, it has been a most remarkable soccer season for Esco. Just how much better it could get is yet to be determined. But both Mendoza and the dynamic Flores are on record as saying they like what they see. Thus, don’t be at all surprised if the Cougars continue to stay on the prowl and gobble up even more opponents.