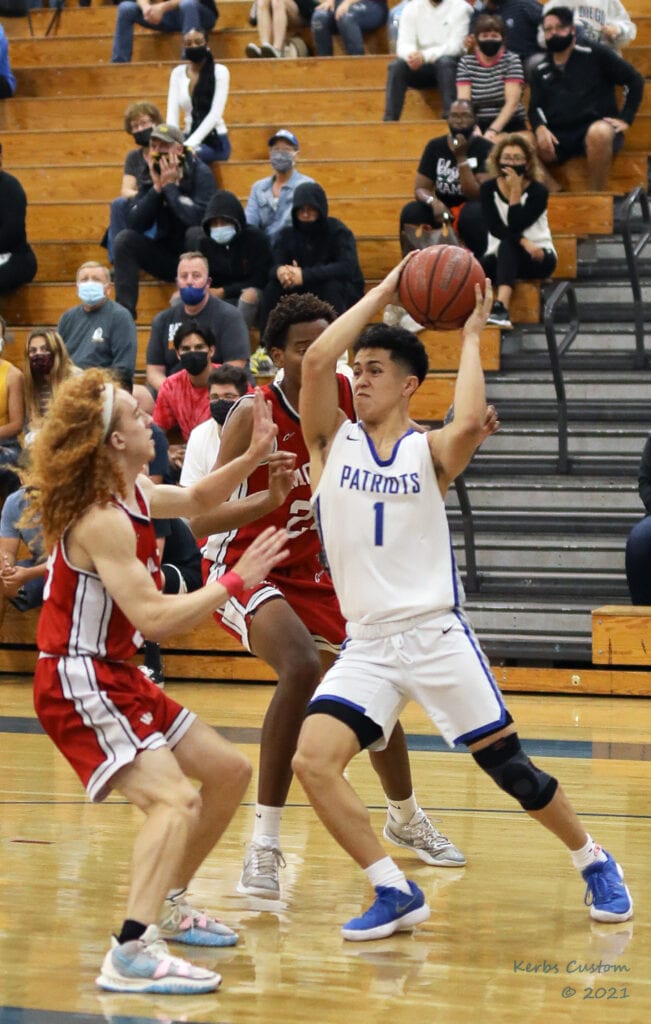 OG guard Chris Martinez fends off a pair of defenders as he looks to pass against Mount Miguel. Photo by Lenny Kerbs.

With a flurry of sports activity taking place as the school year winds down, let’s do some canvassing of the local landscape to see what’s been happening.

Pats and Crusaders advance – Given their regular-season excellence and the high seedings they were awarded heading into the postseason, the Orange Glen Patriots and the Calvin Christian Crusaders looked like the most likely of the Escondido-based basketball teams to make the deepest playoff runs. Not surprisingly, that has proven to be the case.

Entering the second week of the playoffs, the Pats and Calvin are alive and well and looking to continue their respective marches towards a possible championship berth. From all indications, they seemed advantageously positioned to do so.

OG, top-seeded in Division II of the San Diego Section, advanced to the semifinal round with a convincing 66-45 home win over Mount Miguel last Friday night. Racing out to a 17-5 margin after the first quarter, the Pats (22-5) had things well in control while rolling to a comfortable triumph.

Bouncing back from a subpar scoring effort the game before, gifted guard Mickey Chew poured in 19 points while also snaring 9 rebounds. The other Patriot to tally in double figures was senior Roell Lamug who drilled 3 treys on his way to a productive 11-point evening. Ever-steady Adam Nieves was also a huge contributor, collecting 11 boards to go along 9 points. And then there was the unsung Tyler Myers (7 points, 4 rebounds), who proved to be a nice complimentary piece.

Believe it or not, OG almost didn’t make it to their matchup with the Matadors as they endured a huge scare in an unexpectedly rugged first-round tussle with University City, the No. 16 seed. The gritty Centurions forced an overtime session with a fourth-quarter surge but the Pats had just enough to eke out a 53-51 win. Huge performances from Nieves (17 pts., 8 rebounds, 3 steals) and resourceful guard Chris Martinez (16 pts., 10 boards) enabled the Pats to overcome an uncharacteristically down shooting night from Chew. But indicative of his all-around prowess, Chew was still a factor as he chipped in with 8 rebounds and 5 assists.

Now firmly back on track, OG will host Del Norte (13-7) this week knowing that a victory against the Nighthawks will vault them into the finals and perhaps a rendezvous with destiny. 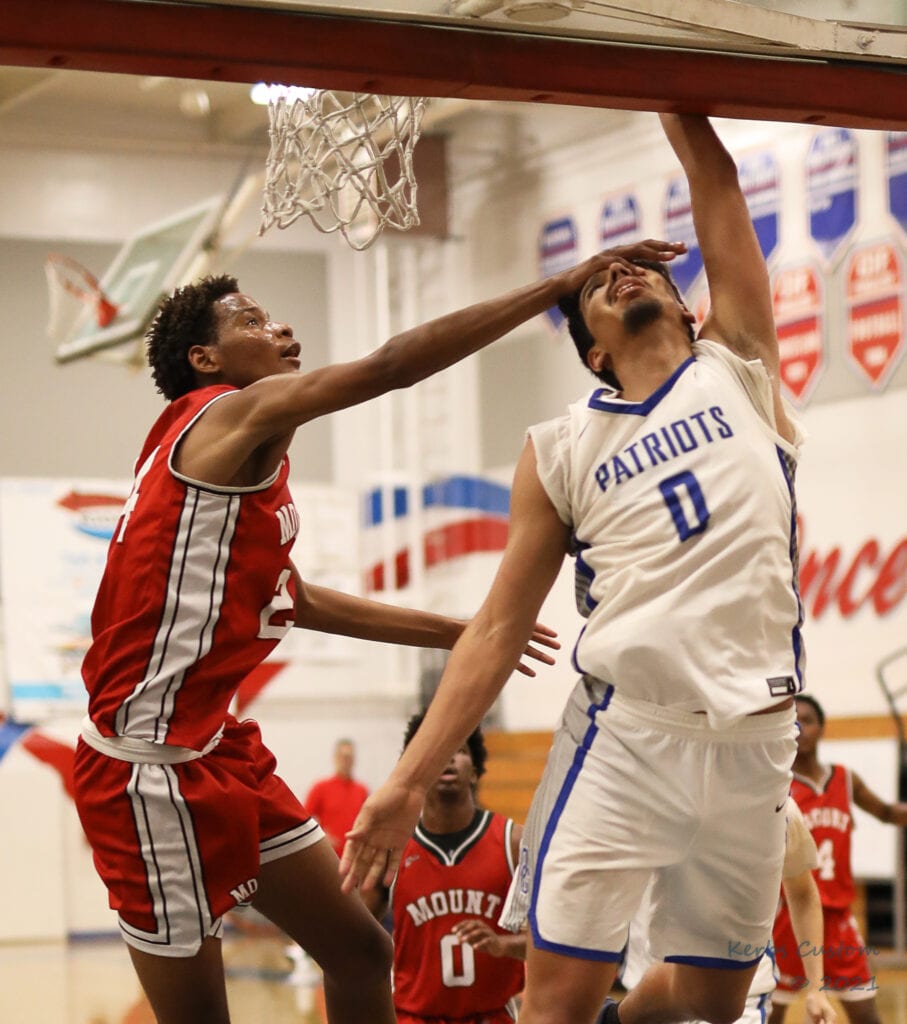 Not even a rake across the face could stop OG’s determined Adan Nieves from converting this layup versus Mount Miguel. Photos by Lenny Kerbs 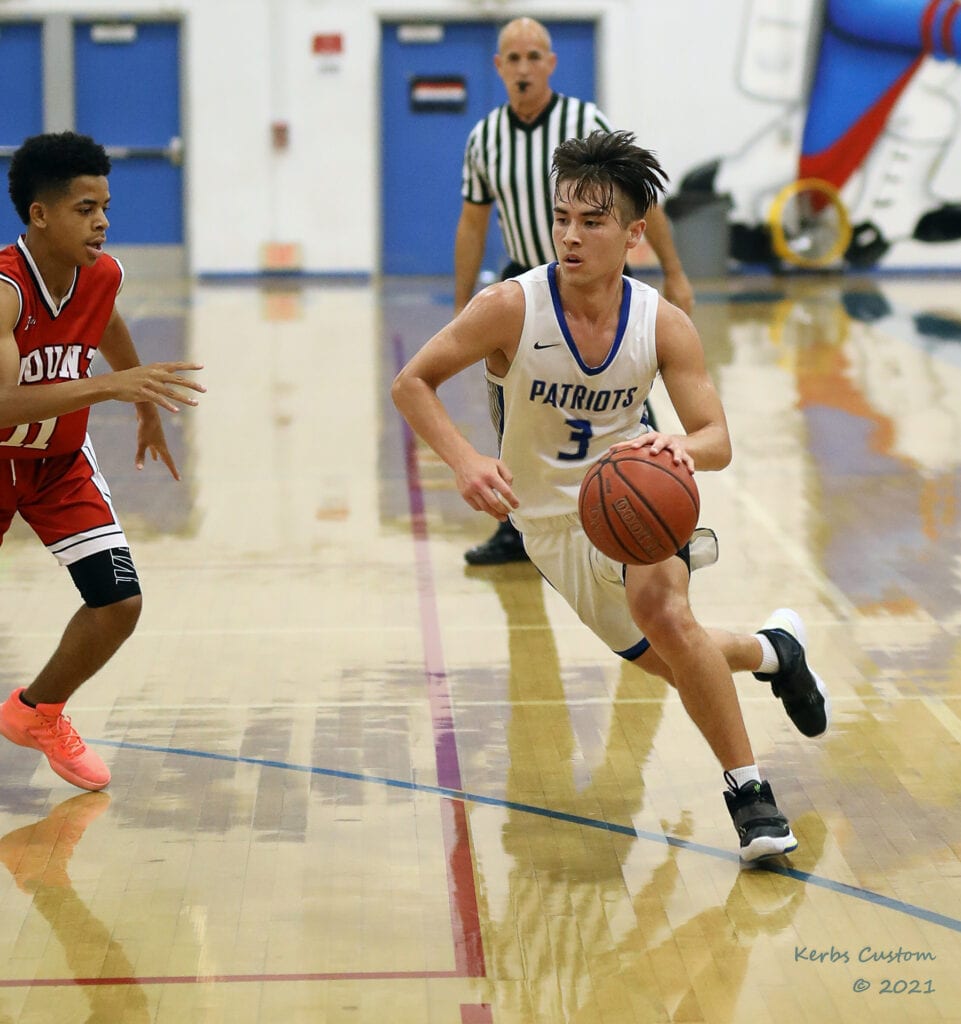 Meanwhile, Calvin (a No. 2 seed) has thoroughly dominated through two rounds of Division IV play. In their playoff opener versus Imperial, the Crusaders (18-2) overwhelmed the Tigers with their height and physicality. As usual, Calvin’s Big Three of postman Martin Gumwel (18 pts., 17 rebounds), Brandon Nelson (19 pts., 8 boards) and guard James Jansma (18 pts., 10 caroms) proved way too much in a 65-28 cakewalk.

Next up was Guajome Park Academy in the quarterfinals and though the Frogs were more competitive than the Tigers, the Crusaders still had their way during a 51-29 conquest. Nelson nailed three bombs from downtown en route to a 16-point effort while Jansma continued making his senior year a memorable one by scoring 15 points and rebounding to good effect with 9 boards. As for Gumwel, his 12 points were almost an aside compared to the havoc he again wreaked on the glass while pulling down another 16 caroms.

Extremely tough in their own gym where they currently own a 10-1 record, the Crusaders will get more home cooking this week when then play host to 3rd-seeded Holtville in semifinal action. But if the Big Three can maintain their prolific production, then a trip to the biggest game of all, a championship final, seems highly likely.

Caimans were Classical – A wondrous season for Classical Academy’s girls soccer team ended with a first-round 1-0 road loss to El Segundo in the Southern California Regional Soccer Championships (Division IV) on June 1. Having not suffered a defeat since early April, the Caimans saw their magnificent streak of 18 straight wins finally snapped.

But that setback didn’t diminish what had been an incredible run for the Caimans that culminated with a San Diego Section Division IV title and provided a lifetime of memories to cherish.

This was a squad that won games in abundance (23), could really go into lockdown mode on defense and had the firepower to net a total of 122 goals. Moreover, the Caimans were a conspicuously young team, starting as many as 10 underclassmen. Based on that fact alone, Classical seems destined for continued excellence on the pitch for years to come.

Expertly guided by head coach Dan Salas and able assistants Frederick Downey and Jacob Pitt, the Caimans were loaded with  plenty of standouts. In junior goalkeeper Analise de Guzman, Classical had a stout presence who would go on to register 13 clean sheets. And Guzman got a world of help from terrific defenders like Kayla Preciado, Maclaren Bell and freshmen Nicole Hong and Paige Palcic.

Offensively, another frosh amazed with her productivity. Hannah Hayes was an absolute revelation on her way to scoring 40-plus goals. And when it came to facilitating with timely feeds and passes, sophomore Sophia Deluca and Amber Burnett were invaluable assets.

Indeed, it was a fantastic campaign for the Caimans on so many fronts. Many words could be applied to what they achieved but simply put, this team was truly Classical.

Baseball Playoffs – As for the doings on the diamond, five local teams qualified for the postseason with Calvin Christian being the only club that earned a bye.

Classical Academy has a formidable task ahead as it will compete in Division I as a No. 12 seed. The Caimans (12-15) will first meet Cathedral Catholic in the play-in round and should they manage to get by the Dons, then they’ll have the chance to square off with 4th-seeded Westview. Classical is led by outfielder/pitcher Jakob Rochelle (.329 avg., 4 complete games), sophomore Jett Cox (.320 avg., 24 runs scored) and resourceful shortstop Julian Nunez (18 RBIs, 11 steals).

Situated in the Division II bracket, San Pasqual (10-19) has a home play-in date with Coronado. A victory there would earn the Golden Eagles the opportunity to challenge talented Carlsbad, the No. 2 seed. In junior infielder Danny Davis (.337 avg., 22 ribbies) and 6-1 centerfielder Jason Hall (.383 avg., 31 hits), SP has a pair of reliable and productive hitters. Freshman Luke Nieblas (24 runs, 10 steals) has also been a key offensive factor. On the mound, righthander Luke Hanson rates as SP’s mainstay with five wins to his credit.

The three remaining clubs all find themselves placed in Division V competition. By virtue of their bye, Calvin (seeded-4th) will await the winner of the Coastal Academy/Ocean View Christian Academy matchup to see who they’ll face in the first round. As for Orange Glen (8-15), the Pats will need to take of business in their contest with Bayfront Charter if they hope to extend their season. And then there’s Escondido Charter (7-12) who must vanquish Mtn. Empire to get a shot at top-seed Calvary Christian Academy in the next round. If the White Tigers are to gain any sort of traction, they’ll need main cogs Diego Pena (.358 avg.), Jackson Noaker (.370 avg.) and Jacon Ronalds (.479 avg.) to deliver.