Prep game of the week 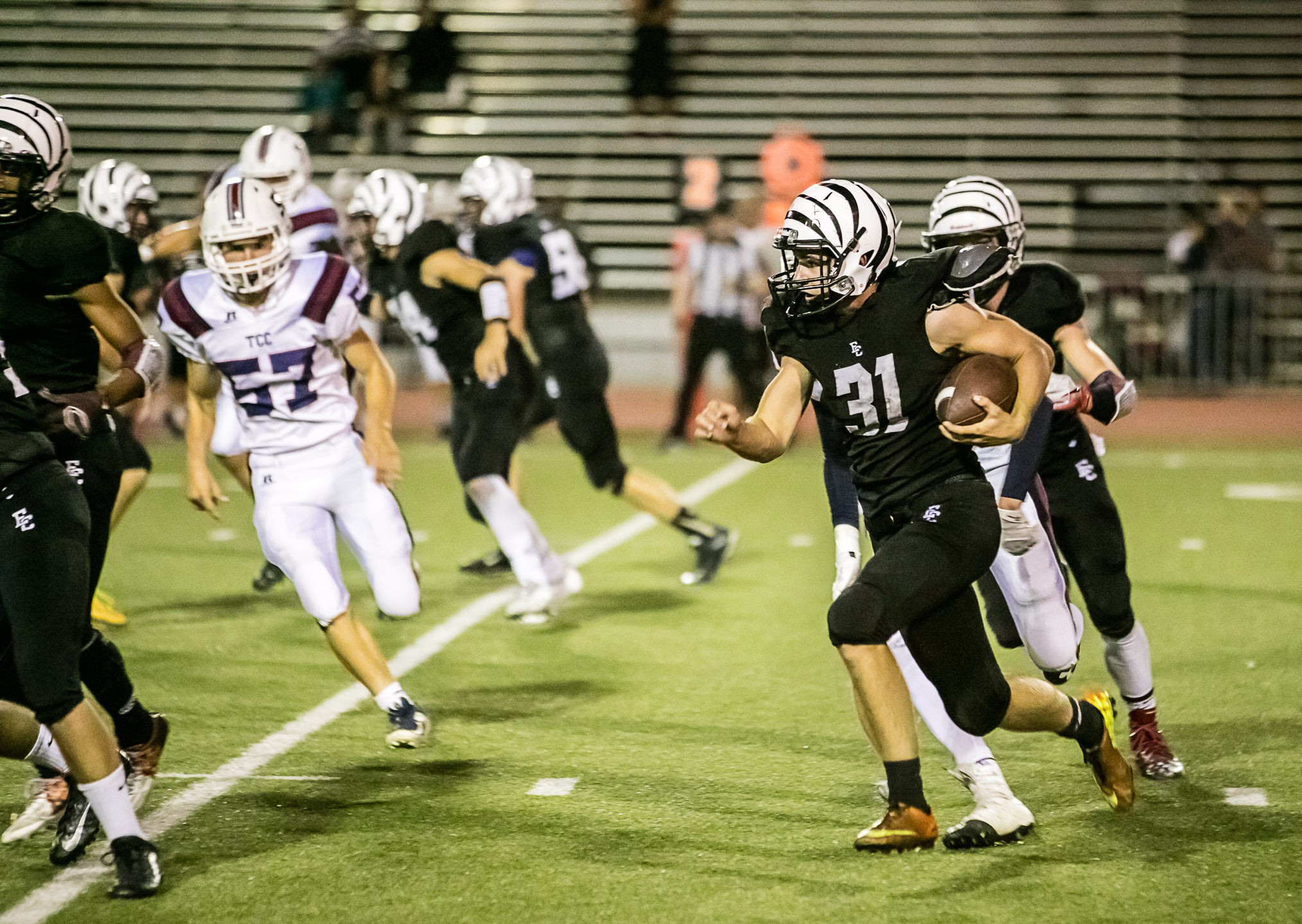 The storyline coming into Friday’s night’s contest between Tri-City Christian (Vista) and Escondido Charter was whether the host White Tigers could find a way to either slow down or contain to some degree the high-flying Eagle offense.

And that was going to be a mighty tough task considering the fact that through four games, Tri-City had averaged 47 points and 500 yards in total offense per outing. Attempting to apply the brakes to an offense like that was going to put the EC defense to the ultimate test.

And in the end, there proved to be no stopping the Eagles and their relentless attack as they raced to a 29-point halftime lead and took it from there en route to an impressive 56-6 victory. The win kept Tri-City’s record unblemished at 5-0 while the White Tigers (1-5) suffered their fifth straight setback. The game also carried with it additional importance since it was the Pacific League opener for both teams.

Given the discrepancy of the score, one might find it hard to believe that there were a couple of seminal moments that might have significantly altered the trajectory of the contest. Oh sure, the eventual outcome, in all probability, wouldn’t have changed but the tenor and the competitiveness of the contest might have.

Initially, things looked quite promising for EC. On the very first play from scrimmage, White Tiger safety Mathew Burcin wisely held his position and by doing so was perfectly situated to pick off an overthrown pass that set up EC at the Tri-City 37-yard line.

Three plays later, Charter quarterback James Frazier rolled left and while artfully throwing across his body, he found diminutive running back Tristan Macmahon in the clear down the middle. The resulting 29-yard connection placed the ball down at the Eagle 1.

But an aroused Tri-City defense stoned three successive rushing attempts from in tight and after a false start penalty moved the White Tigers back to the 6, the decision was made to go for it instead of opting for a field goal attempt. Given Tri-City’s penchant for producing a massive amount of points, it was hard to argue against the rationale of seeking the touchdown. However, the gamble failed to pay off when a Frazier pass to Aaron Kohut fell incomplete.

And when the Eagles took over, they responded immediately, taking just five plays to negotiate the lengthy 94 yards necessary to find the end zone. The catalyst for this drive was a breathtaking 88-yard dash by shifty running back Anthony Madden, who burst to his left, squeezed thru a pair of defenders and then sped 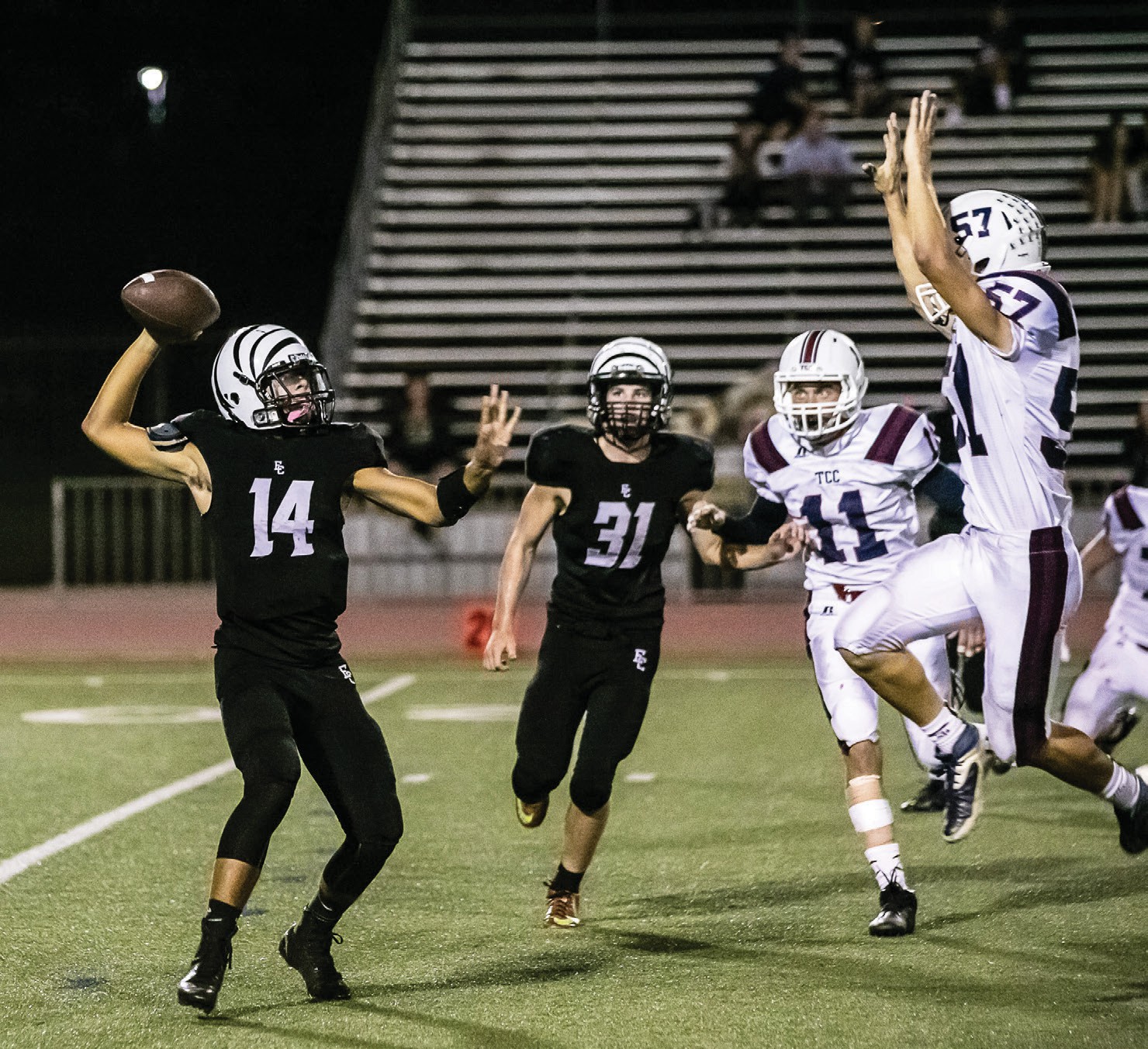 EC quarterback James Frazier is pressured while trying to unload a pass.

down the sideline. Only a dogged effort by Burcin, who admirably never gave up the pursuit, managed to bring Madden down just short of the goal line. But two plays later, TCC’s signal caller Zach Reitmeyer followed a great surge from his line upfront and scored from two yards out. Though the score was only 7-0, it did seem as if a definite momentum swing had taken place.

The other moment of truth that determined how the game would ultimately play out came in middle of the second quarter.

The White Tigers had just gotten on the board by virtue of a 65-yard, 7-play march. This excursion was highlighted by a 35-yard run by the mighty mite Macmahon, who deftly found a hole and then bounced it to the outside, as well as a memorable fourth-down reception by the slick Jake Zimmerman, who literally carried four defenders on his back before finally being brought down. The final payoff came when Frazier spotted Zimmerman coming wide open across the middle and whipped a nice throw to his talented receiver, good for an 18-yard TD hookup. From the EC standpoint, the score was now a much more manageable 19-6. Moreover, there was also a palpable sense on the White Tiger sideline that they were back in the game.

And when the Charter defense, behind a pair of timely tackles by Zimmerman and Logan Stuard, forced a TCC punt on the very next possession, it did indeed seem as if the tide was turning.

But alas, three plays later, the Eagles’ defense jarred the ball loose on a rushing attempt by Hunter Boyce and recovered the fumble. And after a brace of nifty keepers by Reitmeyer, the last of which coming from the 2-yard line, Tri-City had scored again. A two-point conversion run by the weaving Madden added to the Eagle total and made the count 27- 6, with 4:05 remaining before the half. It was at this juncture that the game’s tipping point might have reached.

And just over three minutes later, when Reitmeyer took a step back and slipped thru a crease to his right, his scoring run from short range basically put things out of reach just before intermission. Looking up at the short end of a 35-6 score at intermission, EC knew its chances of making a dramatic comeback against such a high-quality foe were of the long shot variety.

The Eagles would go on to add 21 more unanswered points to their total in the final 24 minutes. Madden authored a nice in-and-out scoring jaunt, Jace Mertes executed a marvelous interception and return 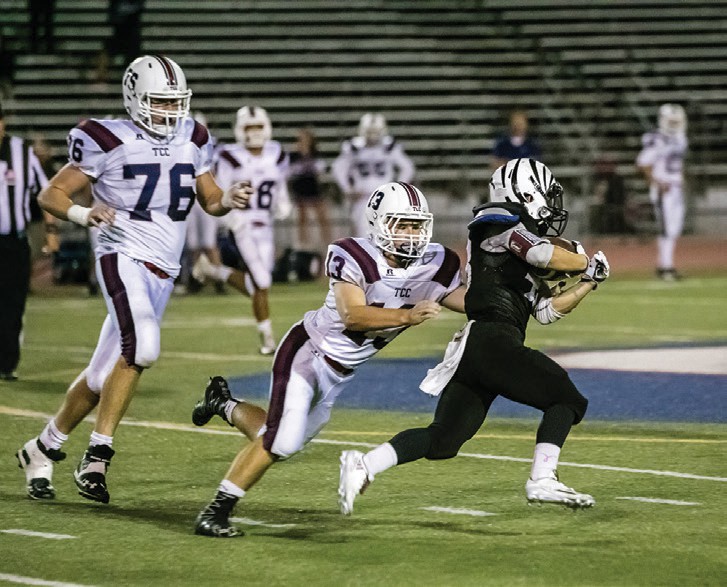 for a 55-yard Pick 6 and running back Dylan Carter finished things off with 22-yard romp right up the middle.

Needless to say, the TCC offense again validated itself and proved to be every bit as good as advertised. Reitmeyer, who tallied four times on the ground, was a dynamic package; deceptive ball handler, elusive runner and capable passer. Meanwhile, Madden (166 yards) was a creative, cutting wonder whose ability to consistently get to the perimeter wreaked havoc on the White Tiger defense all night long.

For the vanquished, there were still some bright spots that offered real hope moving forward. The versatile Zimmerman shined in a number of areas. In addition to his clutch catches and steady tackling in the secondary, the talented senior put his potent leg on display with a couple of impressive touchbacks on kickoffs.

Macmahon showed that he can get into space whether as a ball carrier or receiver and that he’s a legitimate threat whenever he can get his hands on the ball. Fullback Boyce ran hard and with a determined mindset and gave evidence that he can pick up those tough yards between the tackles. And then, there was Frazier. Despite giving up a pair of interceptions on what appeared to be overthrows, this is an athlete who can throw a tight, accurate and catchable ball as he demonstrated on his scoring pitch to Zimmerman Plus, the senior QB is very adept at letting fly when he’s on the move, particularly when drifting left and throwing back to the right.

Defensively, linebacker Stuard had his moments with some visible stops while Burcin merits recognition for his pick and touchdown-saving tackle.

Where Charter goes from here is hard to say. It would be disingenuous to suggest that the season hasn’t been disappointing and or that it has come close to meeting expectations. But there’s still time to resurrect the year and make it meaningful, particularly with only one league game having been played.

There’s no denying that the White Tigers have some talented gridsters and that with some tweaking and shoring up on both sides of the ball, a turnaround could realistically take place. Most importantly, EC has a head coach in Chris Bonta who won’t ever give in and will continue to wage the good fight. And as long as the White Tigers follow the lead of their mentor and never stop believing, a breakthrough is perhaps just around the corner.

But on Friday, that elusive second win of the season just wasn’t forthcoming. You see, when Eagles are soaring, the laws of nature say that Tigers will be hard-pressed to catch them.