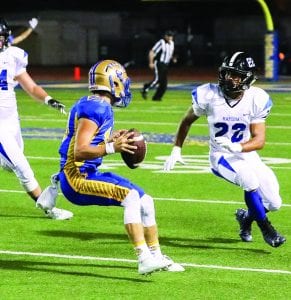 Westin Erdman, shown here on the move against Ramona, is finding his comfort zone as the San Pasqual triggerman. Photos by Lenny Kerbs

With the regular season of high school football having moved past the midway point and the league portion of the schedules kicking into high gear, it seemed an appropriate time to check in on how the Escondido-based squads are faring.

So let’s put on the chin strap and take a look.

Calvin Christian (6-0, 0-0) – Coming into the season, the Crusaders were projected to remain a dominant team in 8-man competition and they’ve done nothing to dispel that expectation. A prolific and potent offensive machine, CC has already scored 41 points or more four times, with the season’s high being the 60 it laid on San Jacinto Academy.

In every game but their narrow 26-22 win over Joshua Springs Christian (Yucca Valley), the Crusaders margin of victory has been substantial.

Though CC can throw the ball if necessary, there’s no denying that the strength of this team resides in its awesome running game. A total of four players have rushed for more than 200 yards while a fifth, quarterback Matt Lafler (195 yards and 8 touchdowns), is ever so close to that mark.

The elusive and often electrifying Daniel Esguerra has been dynamite with the ball in his hands, pacing the Crusaders in both yards on the ground (524) and paydirt totes (9). Juniors Evan Senti and Wesley Salzman have also been ballcarriers deluxe, combing for 525 yards and six scores. What’s more, the contribution of senior Arthur Torres (207 yards, 3 TDs) has definitely loomed large.

As alluded to above, the Crusaders do have the wherewithal to go up top if so inclined with Lafler (5 TD passes) doing the pitching and solid receivers like Bryce Lovisa (139 receiving yards, 3 TDs), senior Leo Gonzalez (9 receptions, 127 yards) and the versatile Salzman (118 yards, 2 scores) taking care of business on the other end.

And though it is the offense that often steals the show, the Crusader defense has been quite noteworthy in its own regard, yielding just an average of 16 points per game.  Linebacker Senti and cornerback Noah Brouwer have been omnipresent and active while leading the team in total tackles with 46.  Brouwer’s considerable influence is also reflected by the fact that he has successfully defended 13 passes while coming up with four turnovers.

Lafler, who sees additional duty as a linebacker, has been another two-way standout with his 23 solo tackles and a pair of interceptions. Meanwhile, defensive lineman Anthony Coseo has racked up three sacks while doing a splendid job of disrupting things down in the trenches.

After last week’s bye, Coach Randy Kreglow’s squad will swing back into action on October 11 when it travels south to take on the San Diego Jewish Academy (4-1), a bona fide foe. But the truth be told, it would be a huge surprise if this loaded Crusader squad doesn’t finish the regular season unbeaten and then goes on to capture its second CIF championship in three years.

Classical Academy (3-3, 0-1) – The Caimans suffered their third loss of the year when the visiting San Diego Cavers scored 23 unanswered points en route to an eventual 47-29 triumph. After closing to within 19-14 late in the second quarter, CA was done in by an immediate 80-yard kickoff return that went for a touchdown that clearly changed the momentum of the game. 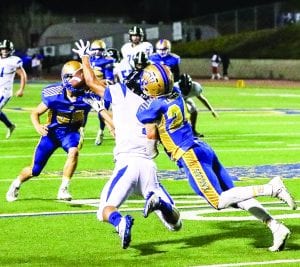 The SP defense, ignited by standouts like cornerback Thomas Del Mastro (24), is really coming on having posted three straight shutouts.

Despite the loss, there were some admirable individual performances turned in by the Caimans. Superb 175-pound running back Jake Gilbert added to the luster of what has been a tremendous senior campaign by having a huge night, gaining a whopping 257 yards on the ground while scoring once. And though he lost a couple of fumbles, sophomore quarterback James Duncan showed some real promise and upside by tossing for three scores.

In what was truly a remarkable effort, receiver/safety Ethan Pillsbury appeared to do it all. In addition to snaring six passes that went for 89 yards and a brace of touchdowns, the talented senior also registered six solo tackles and recovered a fumble.

Others who made a genuine impact were defensive lineman Jonah Cranford with his 10 total tackles which included a sack and junior Diego Preciado, who not only recovered a fumble but used his clever running skills to bring back four kickoff returns for an astounding 172 yards, the longest of which was a memorable 98-yard jaunt.

The Caimans will get back to testing Coastal (League) play this Friday night when they go on the road for a meeting against always competitive Santa Fe Christian. Win there and CA gets right back into the thick of things as it relates to the league standings. And with a weapon such as Gilbert (1,150 rushing yards, 9 TDs), a defensive stud like Cranford (56 total stops, 9 tackles for loss) and the versatile Preciado (3 INTs, 407 return yards) at their disposal, the Caimans have the capability of being a tough opponent for anyone from here on out.

Escondido (3-4, 1-1) – With the defense coming up with a shutdown performance, the visiting Cougars blanked Fallbrook 17-0 to earn their first Valley (League) win of the season. After clinging to a narrow 3-0 advantage at halftime, Esco parlayed two rushing touchdowns after intermission to salt the game away.

When EH forced the Warriors into turning the ball over on downs early in the second period, that seemed to set the tone for the balance of the contest and from that point on, it seemed as if the Cougar defenders were dictating much of the play.

This year has definitely seen significant progress for the Cougs in contrast to last season when Esco was able to cop only two games. In addition to their three victories, the competitive Cougars have barely missed out on two other wins, the differential being five points or less in each of those instances.

Look for Jud Bordman’s squad to have a great shot at leveling its overall record when it welcomes Del Norte (1-5) this coming Friday night to Chick Embrey Field. If the defense can come close to duplicating its last effort and should explosive running back Kevin Rodriguez be his accustomed self, the Nighthawks should be in for a long evening.

Escondido Charter (0-7, 0-1) – Going into the campaign, Coach Greg Brose knew that his team would be greatly challenged given the reality that the White Tigers were awash with underclassmen and that many players would have to learn on the job.

As a result, some painful growing pains have been endured. Neither the offense (which has scored just 50 points and has been shutout four times) or the defense (which has given up an average of 43 points per game) has been able to find much traction. But though they may be paying a price now, the White Tigers are acquiring valuable game experience that should definitely pay dividends not only in the future but possibly in the short term as well.

Last week’s 35-18 loss to Francis Parker was an indication that perhaps circumstances are beginning to change and improvement is taking place. EC will look to build on that outing as it hosts Tri-City Christian this Friday for only its second home game of the season.

Orange Glen (1-5, 0-1) – Last week the Patriots, undermined by five turnovers, were on the wrong side of a 42-7 decision versus Santa Fe Christian. A massive 28-point second-quarter blitz by the Eagles established an insurmountable lead and removed all doubt as to the eventual outcome. Among the stars for SFC was rugged fullback Jack Miles who tallied twice and rushed for 113 yards.

In defeat, the Pats running game had its share of moments, with quarterback Cael Patterson maneuvering his way to 155 yards and a score while Luis Mateo chimed in with 72 yards of his own.

The defense also had players who made a mark and never gave in. Sophomore middle linebacker Julien Lesa again played well beyond his years while recording nine stops, three tackles for loss and one-and-a half sacks. Senior defensive lineman Brian Ortiz rung up nine tackles to go along with a caused fumble. And proving that he’s far from a one-trick pony, Patterson was a factor on the other side of the ball as well with a team-leading 11 total tackles.

Now heading into the meat of their Coastal (League) schedule, the Pats will next face the heavyweight Bishop’s Knights (5-0) in a rare Saturday night encounter down at La Jolla. But after that the slate gets much more manageable so the Pats, who possess some legitimate offensive tools, will have a very realistic chance to add their win total.

San Pasqual (4-2, 1-0) – Coming off a bye week, the Golden Eagles have been flying high as of late. Their current three-game win streak includes domineering shutout triumphs over Orange Glen, Fallbrook and Castle Park by a stunning collective count of 137-0. Admittedly those three opponents have just two victories between them, but that shouldn’t take away from the impressive roll that the G.Eagles have put together. This is a squad that has been hotter than even Hades itself.

Based on the recent results, it appears as if everything is coalescing at just the right time. Quarterback Westin Erdman seems to be finding his comfort zone while running back Saud Carillo and dual threats Shawn Carter and Brett Sayers have been driving the opposition to distraction with their latest derring-do. Moreover, the heavy lifters up front have been doing stellar service with forceful lineman Sean Cohen leading the way.

And on the flip side, the defense has been darn near impenetrable. In the trenches, Trevor Rawdon has been a rock of stability while linebackers Carson Cruz and sophomore Johnny Vega have been exceptionally good, reliable and aggressive. Add to this enviable mix the contributions of secondary standouts Josh Nolan and Thomas Del Mastro and it’s no wonder foes are finding it exceedingly difficult to crack the goal line.

But now comes a supreme test as Coach Tony Corley’s crew will attempt to protect its house against the formidable Valley Center Jaguars (5-1) this Friday night. Without question, these are the two best teams in the Valley (League) and in all probability, the winner of this confrontation will go on to take the circuit title. Thus, the stakes couldn’t be higher but the Golden Eagles will head into this tussle knowing that they are peaking and functioning at a very high level. After its anticipated encounter with the Jags, SP will have a much better idea of exactly just how good it can be.

So there you have it as relates to the current status of the teams that call Escondido home. Right now, Calvin Christian looks unstoppable while San Pasqual is hoping to extend its winning streak to four and in the process, validate itself as a real postseason threat. Both Classical and Escondido High have shown some encouraging signs while positioning themselves to have successful seasons. It would be a disappointment if Orange Glen doesn’t finish the year more strongly than it began while the young White Tigers of Esco Charter will continue to seek out that elusive first victory.

To date, when it comes to local prep football, it has cut across seemingly every spectrum and proven to be quite the smorgasbord.