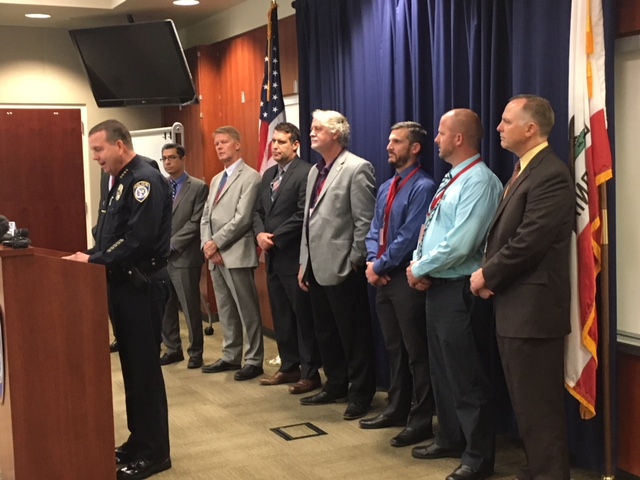 In the wake of the tragic shooting at Marjory Stoneman Douglas High School in Parkland, Florida, police and school officials Monday afternoon announced a collaborative effort to ensure the safety of Escondido campuses. School administrators from Escondido public, private, and faith-based schools attended the news conference.

Escondido Police Chief Craig Carter led off the 21-minute press conference held at the fire and police headquarters. “This is certainly a hot topic and very important to our community, school safety, child safety is number one for all of the law enforcement agencies of the county but also for the schools themselves, keeping the students safe,” he said.

The main purpose of the news conference was to encourage the public to reach out to the authorities when they learn of perceived threats; plans to obtain funding for an additional school resource officer, and to let the public know that schools and police are actively working together to increase school security.

Escondido police and school officials have met about dozen times in the weeks since the Parkland, Florida school shooting. The focus of those meetings has been to further scrutinize all existing school safety plans. Virtually every aspect of school safety is being re-evaluated.  It includes the goal of adding a third school resource officer (SRO,) an armed police officer whose specialty is working with schools.

Although all Escondido police officers can respond to schools when needed, the SROs have developed a bond with staff and students that leads to more open communication. The open communication results in SROs receiving information early and being able to quickly handle potential safety concerns before a true  threat emerges.

The chief introduced representatives from the public and private schools operating within the city, as well as San Pasqual Union, which, although technically in San Diego City, works closely with the EPD.  They included Supt. Steve Boyle of the Escondido Union High School District, Supt. Luis Ibarra of the Escondido Elementary School District, Supt. Terry Kok of Calvin Christian School, Shawn Roner, principal of the Escondido Charter High School and representatives of GracePChristian, the Classical Academy, Escondido Christian and Epiphany Prep Charter School.

“We hope to inform the students, parents and staff that we are committed to school safety,” said Chief Carter.  This working group of schools and police understands the importance of having plans in place and they are looking at gates, fencing, and school cameras as ways of making schools safer, he said.

They are working together to fund an additional school resource officer, which would cost about $130,000 a year including benefits. “We are trying to be a little more proactive than just reactive,” said Carter. Police officers have trained at each campus in cooperation with staff. Every year the police partners for a full-scale drill at one of the schools. They hold active shooter protocols, so that for the students and staff, “it’s more real,” said Carter.

The chief emphasized the importance of students and parents using resources such as the Crime Stoppers program, which “empowers students to be the voice, to anonymously call or put an app where they want to tell us what is going on. They can anonymously give us information.”

The P3 Tips for Smartphones, for example, is easy to download and easy to use. “I highly recommend that,” Carter said.

“The best intelligence sources that we have on campus is the students,” Carter said. “We take that information and determine its validity. Often the kids are the most important resource.” He urged anyone who has information about a potential threat not to hesitate to call. “Let us call and let us make that determination. That’s what we are supposed to do,” he said.

Escondido High School Supt. Steve Boyle took to the podium on behalf of the various public, private, and faith based schools in Escondido. “The greatest resource we have is when parents and students share threats that are out there,” he said. “If you see something, say something.  All of our collective schools take violent threats very seriously.” He noted that all the schools have safety plans in place and coordinate them with the police department. They are revised each year. “Our schools are safe places and it requires our community working together to maintain safe schools,” he said. “If you see something, bring it forward.

The Escondido police are “geared up and ready to go,” to react to such threats, including a special team of police that includes experts in social media, where often such threats first surface.  “We work very closely with the schools,” said Carter. “Sometimes it’s just some kid talking.” If they visit a home to follow up on a threat, they will ask about guns in the house, he said. “We take each one of these reports seriously.”

The chief warned, “If you say something even in jest that will be taken very seriously and we will be in contact with you.” Police have responded to about six such threats to since February, when the Parkland shooting occurred.

“Every time we get together we get more great information,” said Carter. He noted that they are looking at a program that electronically checks in and out people who visit the campus. “If we can have a collaboration there is a chance it might be cheaper.”

One hot topic nationally has been President Trump’s suggestion that teachers who are familiar with firearms be allowed to have them on campus as a bulwark against school shooters. Carter was asked about that.

“We have talked a little about that,” he said. “It’s not something that we would dictate to the schools, but we would like to be part of that conversation if it comes up. It has been a conversation in San Diego County. Certainly,  if a teacher has a weapon, now we would have a gun on campus. Now we would have at least that one.” But in any event, if any school moved forward to allow that, the Escondido Police Department would be involved, said Carter.

“Our students, parents and staff take this very seriously,” said Supt. Boyle. “And they bring it forward. The things we do to bring this forward the kids take it very seriously. With the advent of social media kids bring it forward when they see it. We’ve seen a response from students to share information.” He added, “We go after each and every situation to make sure it’s not a threat.”

Carter praised the school administrations. “When they do that kind of active shooter drill they want to make sure they do it right, and we provide the support they need.  They have a passion for educating our kids and for keeping them safe.”

Asked about what happens if someone fakes a report, Carter said, “We’re still taking it case by case, but if it is someone doing it as a joke we are going to take it seriously and prosecute that as well.”

If you hear something, say something

Carter said, “Don’t discount what you have heard. Call us. If you hear something, see something, say something.” School officials are in talks to provide funding for an additional School Resource Officer (SRO). SRO’s are full-time Escondido police officers who are assigned to service the specific needs on school campuses.

Since February, police have investigated about six threats on Escondido school campuses. All threats are taken seriously and investigated fully. Chief Carter stressed the importance of students to understand the severity of making a school threat. Any threat, regardless of intent will likely result in felony charges.