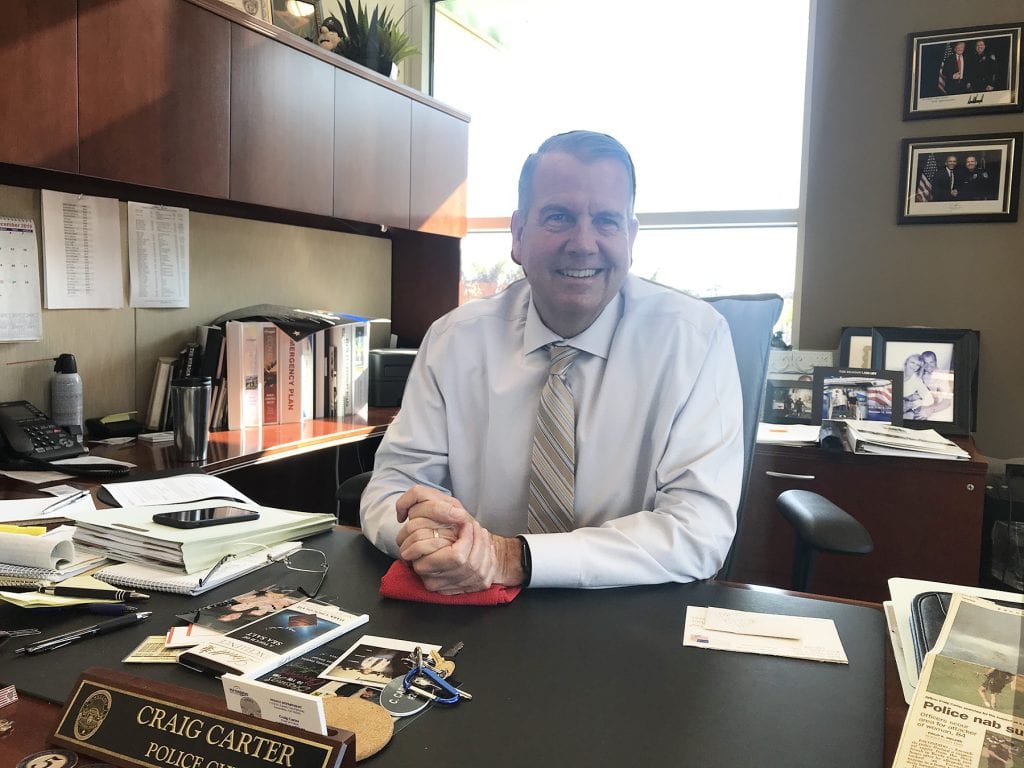 Chief Craig Carter sitting at his desk, which he will vacate on December 19.

On Thursday, December 19, the first ever “walkout” ceremony for a retiring Escondido police chief will be held for Craig Carter as his 29 years of service is acknowledged with a final message    on police radio to all city police officers in the field.

It is a traditional sendoff to retiring police officers and a special acknowledgement by his peers of a career of service. All of which was spent with the Escondido Police Department from the moment  he began it as an unpaid reserve.

The walkout announcement, which will occur around 10:30 a.m. will go something like this: “Attention all units, in recognition of 29 years of service Police Chief Craig Carter is retiring . . .” It will end with Carter speaking his final words as chief to the men and women he has commanded for the past six years.

Afterwards,  the chief will be feted at noon at the California Center for the Arts, Escondido’s banquet hall.

I sat down with Chief Carter earlier this week to reflect on his nearly three decades of service. He was going through his desk and finding all sorts of things that dredged up memories. Such as the Polaroid photo of him on his first day as a reserve office with the department. “Doing it for free,” as he said.

His immediate plans after retirement are to go on a vacation with his wife and spend time with their grandson. Despite being perhaps the most respected police chief in San Diego County, having served as president of the San Diego Police Chiefs and Sheriffs Association since 2015, Carter has no  aspirations to higher public office. He’s not interested, say, in running for Sheriff. “I don’t think I would add value to that,” he said. “I’m not running for sheriff.”

Of course, a police chief retiring at the peak of his career amidst many accolades will receive offers, and Carter admits he has had some. “I don’t have a job lined up,” he said. “People have been talking to me and I’m sure I will land something else—and I’m not opposed to that— but I don’t know what that will be.”

As he looks back on his years, what sticks in his mind is the relationships. “This department is truly an amazing police department,” he said. “From the officers to the civilian staff and support, they actually really care about their community. And having those relationships has been most memorable.”

He began his term as chief on August 16, 2013. Asked what accomplishments he is proudest of, Carter said, “I’d say we are cutting edge. We are always reinventing ourselves. We’re always looking at how we can do things better.”

Those accomplishments include a robust and effective community policing policy, the introduction of body cams on officers and outstanding morale. “We have a good amount of candidates who want to come to Escondido because of the reputation we have,” he said.

The wearing of the body cams  was a policy  instituted several years before Carter took charge, but which he carried forward successfully. It was not initially popular with the officers. Now, says the chief, “It has become   the fabric of our law enforcement and a tool that every officer appreciates.”

Carter believes the body cams benefit officers and the members of the public that they interact with. “It goes both way about evenly,” he said. While he was talking he showed an example of the first body cam and then the one they use now. “This was something we purchased off of Amazon in 2009,” he recalled. “It was part of our implementation and then we went full deployment with them.”

He added, “I do feel it is a mutual benefit. We found that most people if they know they are being recorded, they may behave better. So that goes both ways, for law enforcement and the public.”

One thing he wanted to do during his term, but which will have to be left to his successor, is to improve the police department’s range facilities, which are located halfway up the Valley Center grade. The range was burned in the 2007 wildfires and hasn’t been restored completely. It is used by almost every agency in the county.

Chief Carter is credited with vastly improving the city’s relationship with its Hispanic population. He attributes this to “open dialogue; open lines of communication. If anybody in the community wanted to meet with me, I would meet with them. They would voice their concerns and oftentimes it was easy to explain the way that we do things but sometimes it was policy changes that would make things better. So just having the open dialogue and communication was important.”

Changes were made as a result of such communications. “There was training that we put together” he said. “There were meetings with the Mexican Consul General. I can’t tell you how many community meetings where there was a question and answer on immigration or about gangs or law enforcement interaction in the community. When you give someone a chance to have a conversation with someone who makes the decisions it tends to give them the sense that they can actually make a difference.”

His philosophy of leaderships reflects Carter’s down-to-earth approach. “I’ve tried to be the same person that I was when I walked into the door on day one as a reserve. And being that person all the way to the twenty-ninth year. Also allowing people to have a say in what direction they are going. As a leader you can tell them what’s going on but it’s much better if you can get them to want to follow you.”

He added, “I try not to take myself too seriously. This a very serious job, but I encourage people to have fun doing it, while being professional. The best thing I could make happen is that everyone in this building enjoys coming to work. I think that’s evident by our high retention rate.”

Carter was delighted to learn that he was being asked to remain on the Governor’s 911 Advisory Board, which he has served on under both Jerry Brown and Gavin Newsom. “They have asked me to stay on until November 2020 and I’m flattered by that. There’s always work to do with 911 systems, so that is neat.”

His final statement was a message to the community: “Never underestimate the powerful support that they can give to their law enforcement from.” He held out a letter he had received from a young man. “This is just a thank you. A show of appreciation. This city and its residents do a really good job of that.”

When I had come into his office for the interview, the chief had been chatting with an older man wearing the white uniform of a police volunteer. “You saw one of my volunteers, who is delivering donuts because one of the donut shops, to say thank you, delivers six dozen donuts. There’s an anonymous donor who gives $10,000 every year so that the police can give $100 donations to people who need it this time of year to people who need that extra help. The volunteerism and the support that we get from churches, and individuals, is just amazing. Our officers recognize that and appreciate it.

Asked what his advice might be to his successor (who has not yet been selected) the chief said, “Stay grounded. When you make chief’s a little like achieving celebrity status. People want to meeting you and hear what you have to say. But you never want it to go to your head. Don’t forget you are a police officer doing your job. That you primary job is to keep people safe and that you need to do what is necessary to do that job.”

Note: There is no word yet from the city on the vetting process that will be used to pick a successor for the chief. City Hall is waiting so as not to detract from Carter’s day in the sun as he collects his plaudits for a job well done.