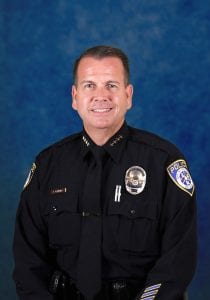 Escondido Police Chief Craig Carter, who took over a beleaguered department six years ago and transformed it into an almost universally praised organization with high morale and great public relations, is being showered with encomiums upon the announcement that he will retire at the end of the month.

Chief Carter is considered by many to be the best police chief in San Diego County. Despite being the top police officer in the city, he still regularly goes out in a patrol car and interacts with the community.

Carter will retire at the end of December after 29 years as a cop and six years as the top cop in Escondido.  He joined the EPD as a volunteer reservist in 1990.

He became Chief in 2013 when tensions were high between City Hall and then-Chief Jim Maher, who had done very little to maintain good relations with the Latino community that makes up half of the city’s population.

It was in this highly charged atmosphere that Carter took charge and within six months the department was a completely different organization. So much so that not too long ago one of the members of the city council referred to the chief as “bland.”

City Manager Jeff Epp told The Times-Advocate, “It was my privilege to work with former City Manager Clay Phillips in hiring Craig as the Chief of Police.  He has created a culture of excellence and professionalism, with a very specific focus on the safety of the citizens of Escondido.   His leadership team is outstanding.  Craig has been a tireless worker for the Department, an incredible advocate for public safety and the residents in our community.”

Mayor Paul McNamara added, “It is always difficult to say good bye to a long term public servant.  Chief Carter has served the will of the council and by extension the will of the people of Escondido,  faithfully for many years. Even during some of the controversial times when council direction was called into question, Chief Carter served with integrity and kept the safety of this city as his top priority.   Additionally, his programs in the city for crime prevention and outreach have become models for the county.  He was innovative and always looking for a better way to do business.  He was never too important not to take the time to talk with a local resident, or group or club.  He cared about this city and the city will miss him.  We wish him the very best in retirement and any future endeavors.”

We reached out to the city council members for comments about the chief and received these:

Olga Diaz: “Chief Carter has been a kind and easy to work with leader.  I appreciate his willingness to embrace the work of local non-profits to support youth.  I wish him well and thank him for his service.”

Mike Morasco said, “It’s bittersweet. I’m happy for him. Amazed for the career he has had and happy that we had him for the past six years. He has been phenomenal, a consummate gentlemen, and has taken our city police department to new heights. He is going to be sorely missed. He’s retiring, but when you are best police chief in all of San Diego county, I wouldn’t be surprised if others were lining up to see if he could help them, especially the progress that has been made and the inroads that have been made in reducing gang crime.”

Morasco added, “He has been such a great communicator with all of the different neighborhood programs, and in reducing homelessness.. His outreach program is absolutely amazing and his communications skills are excellent. I could see even the County wanting him but’s going to be up to him and his family.”

He concluded, “If you look at a reduction in crime, improved safety, better morale, more efficiency, better communication and general peace and stability; if that’s what bland is I’ll take that all day long. He’s a guy who looks at every citizen the same. He doesn’t care about race and politics. He has done it better than anyone I’ve known.”