Police and community volunteers clean up West Side neighborhood 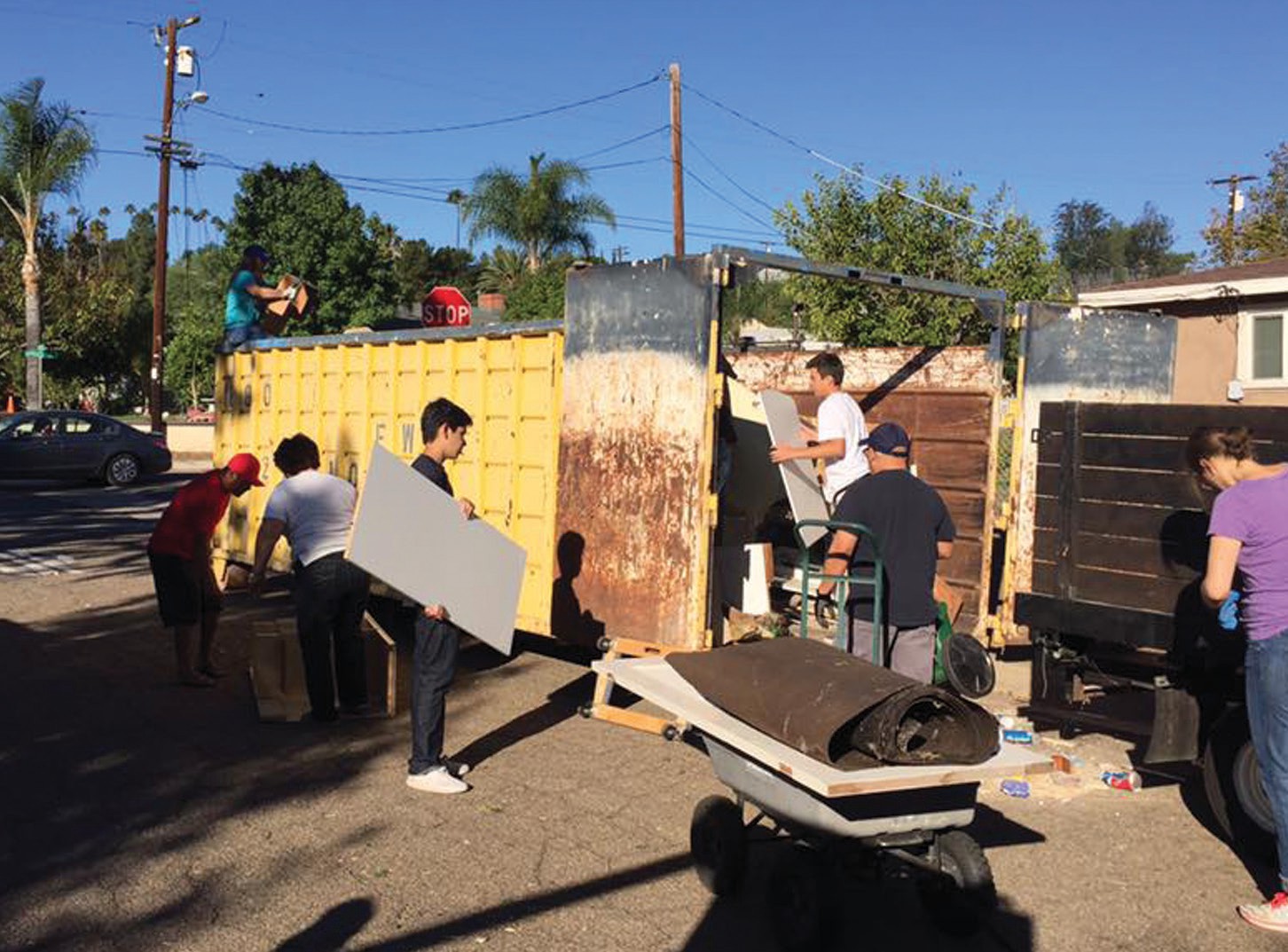 Volunteers loading up dumpsters in one neighborhood on the West Side; photo courtesy of Pastor Dave Hall of Emmanuel Faith Community Church

Back in July the Times-Advocate covered an event where black community leaders and city leaders gathered for unity following the shootings that have happened this year.

At that event San Diego Police Chief Shelley Zimmerman explained why this event was so important. “We need to be an example to the rest of the nation by standing together for peace in our communities.” she said, adding, “San Diego sets the national standard for community policing.”

Transformation Project; a community policing initiative that seeks to reduce crime and enhance quality of life through environmental transformation, one neighborhood at a time.

The project started in January of 2014, when the EPD started surveying the citizens in Escondido on what issues concerned them. As TA reported last week, the NTP was behind the new parking ordnance in East Escondido.

On Saturday, October 8 the NTP in partnership with Christadelphian House of Worship and 60 volunteers from Emmanuel Faith Community Church held a community volunteer day on the West side of Escondido from Centre City Pkwy to Tulip and 5th to 9th Ave.

The event was supposed to start at 8 a.m. at Christadelphian House of Worship but some volunteers and residents were out as early as 7 a.m. getting to work according to EPD Sgt. Jeff Valdivia, who was helping patrol the area during the event.

Also representing the department was Captain Eric Skaja. I spent a couple of hours walking the neighborhood with Captain Skaja, who was helping volunteers pick up trash on the sidewalks and street gutters.

Asked how this event was paid for, he said, “It comes partially from community block development grants and donations from local organizations,” such has the aforementioned Emmanuel Faith Community Church. As to why this particular neighborhood, he replied “This is an older but proud neighborhood.”

Escondido Disposal Inc. (EDI) volunteered four roll off box dumpsters to dispose of waste and trash for the event. Even one of their drivers volunteered his time to transport the full dumpsters to EDI’s disposal center and returned to the neighborhood with the empty ones.

One neighbor in the area reported that at the end of the day, “residents were still bringing trash to the dumpsters after the volunteer day concluded at noon.” EDI then sent a second driver to assist the driver who was already volunteering that day.

EDI wasn’t planning for such an incredible response. Dan Myer an account representative from EDI told the TA, “Originally EDI donated four roll off dumpsters to four areas in the West Side and due to the response dispatch authorized an additional eight dumpsters to the area; making the total amount of 12 dumpsters with a combined total of 34.52 tons of waste from the West Side.”

Sgt. Valdiva showed me the part of the West Side that has been most affected by crime and gang activity. He introduced Monty Miani, president of WIN (Westsides Involved Neighborhood) Group which watches the areas between Ypas and Quince. The WIN board meets quarterly to discuss the issues in their area.

His neighbors Diego Enriquez and Cora Jereza also spoke with us.

Miani who moved into the area ten years ago, noticed that there were problems in the neighborhood two years after he moved in. They were having a neighborhood block-party and when it came time to clean up Miani and his neighbors noticed how much garbage was on the ground around the neighborhood.

Miani said, “There are shootings and drug deals done on a regular basis.” He says his daughter always asks him, “if certain noises are gunshots. The noise of a car backfiring even scares her,” he said.

There have been 15 shootings in the past 10 months alone, according to Miani. “That’s why we started WIN eight years ago,” he said. “This is a family oriented neighborhood. There are historical homes still here from as early as the 1900s.” He said, “We want it [the neighborhood] to stay that way.”

Miani met with the city’s chief of engineers earlier this year. He: “contacted the city and invited the chief over for coffee at his home to discuss the neighborhood’s concerns.”

One of Miani’s neighbors, Diego Enriquez, who lives to the right of Miani, saw me interviewing him for this story and came up to me to say, “You see my lawn. I don’t want my lawn looking like this but they (the state of California) won’t let me water my lawn,” before walking back to his backyard. Enriquez was referring to the state’s recent regulations on water use, which overrides a municipal ordnance telling residents to upkeep their yard. Sgt. Valdiva, who was standing nearby, commented: “It’s a little hard to go after these people for not watering when the state is telling at you not to.”

Cora Jereza lives to the left of Miani on the street. She bought her home out of foreclosure back in 2009. She is also part of WIN and has been planting succulents in neighbors’ yards to make them look better. Asked what she thought of the volunteer day; she said, “This is great to be a part of.”

I asked Cora and Monty what goes through their mind when they see community events organized by police and themselves overshadowed by recent news events like El Cajon, Los Angeles etc. and the protests by minority groups like Black Lives Matter. They both answered that “All Lives Matter” and “that Family Comes First.” Monty added, “They (residents) should call the police no matter how small the problem.” Cora said she loves it when the police pass by her house in the morning. “It makes me feel safe,” she said.

The WIN Group’s next quarterly meeting is on November 8. For more information on this or other neighborhood groups in your area of Escondido go to the City of Escondido’s Neighborhood Services Page: www.escondido.org/neighborhood-services. aspx

Special thanks to Tracy Kreckman, photographer for Emmanuel Faith Community Church and the Escondido Police Department for providing us with photos of the day’s events.