Plenty of doings on the local sports scene 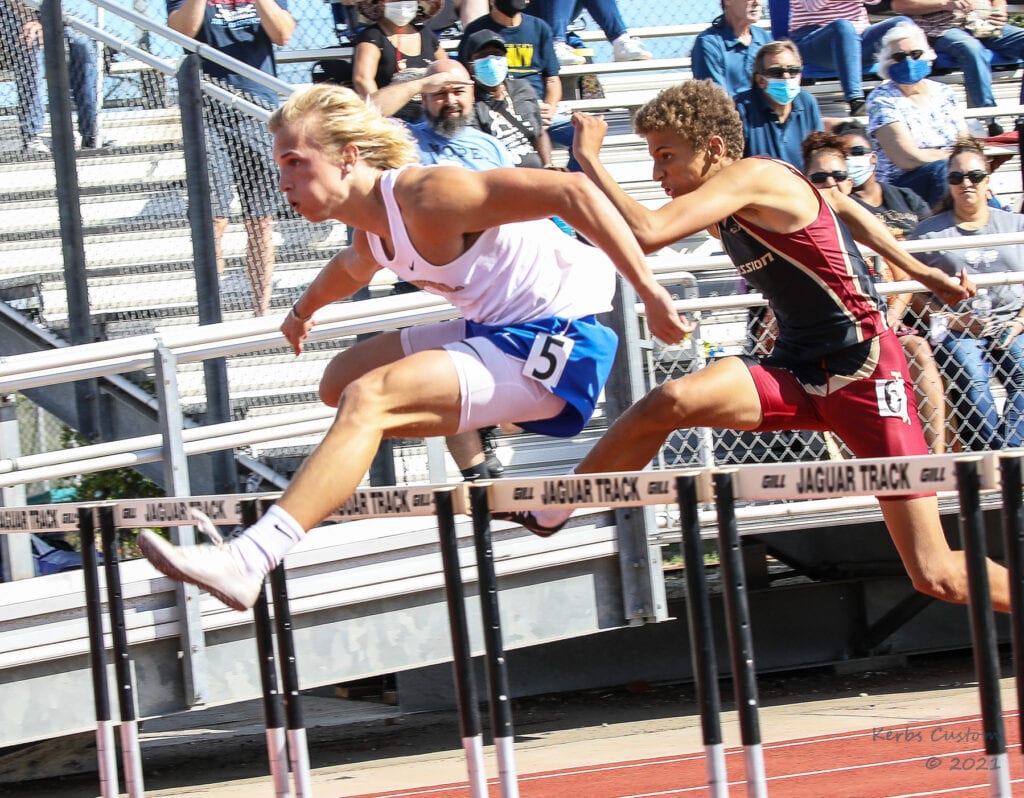 With so much activity and action taking place with local athletes and teams, this seems a fitting time to catch up on  the latest happenings.

Hoops Roundup – A hefty six Escondido-based teams qualified for the CIF San Diego Section Basketball playoffs. Of those, Orange Glen and Calvin Christian seem the most advantageously positioned to make the deepest runs.

Given a well-deserved No. 1 seeding in Division II, the Patriots (20-5) will have home court advantage up until the finals as long as they stay alive. This could be a huge benefit considering the Pats have rocked (14-2) in their own house. Anchored by standout guard Mickey Chew and resourceful forward Adam Nieves and bolstered by the recent return of the valuable Chris Martinez, OG has the potential to be another one of Coach Chris Featherly’s clubs that does serious postseason damage. The Pats faced University City (7-8) in their playoff opener earlier this week.

The Crusaders (16-2) will enter the Division IV postseason fray seeded 2nd and riding a four-game winning streak. Calvin has plenty of height to offer in 6-11 big man Martin Gumwel, the 6-7 Brandon Nelson and 6-4 James Jansma. The ascending Gumwel is a double-double machine (17.9 ppg, 13.9 rpg) while Nelson (16.7 ppg) and Jansma (10.2 ppg) are legitimate offensive weapons. Tougher than nails at home (9-1), Calvin will host a lightly-tested Imperial team (4-4) in first-round action where an upset seems all but impossible.

The other Esco squads that advanced to the playoffs were Escondido Charter, San Pasqual, Classical Academy and Escondido Adventist Academy, with the first three being placed in Division IV while EAD is situated a division lower.

For the No. 6 seed White Tigers, so much revolves around the production of 6-7, 230-pound junior Marley Gonzalez who can put up points (15.8 ppg) as well as crash the boards (13.7 rpg). Gonzalez has dependable wingmen in senior captain Anthony Ferrara (13.4 ppg) and shooting guard Tristan Hernandez (10.3 ppg) who can share the offensive load. Esco Charter will kick off its foray into the postseason with a home encounter against Southwest EC, a No. 11 seed.

The playoff pathway for both San Pasqual (seeded 13th) and Classical Academy (a No. 16 seed) figures to be a mighty rough one. The Golden Eagles first-round opponent is Victory Christian Academy, a 15-5 squad that went undefeated in Citrus League play. The Caimans’ task is even more daunting with the No. 1 seed Maranatha Christian (18-5) awaiting them in a playoff opener.

Finally, there’s Escondido Adventist (6-5), a team that took home the Ocean League crown. Paced by the guard tandem of Nathan Tapia (13.5 ppg) and Moses Kisaka (10.5 ppg), the Hawks (a No. 10 seed) hope to make inroads in Division V play that begins with a first-round matchup versus High Tech CV (6-7). 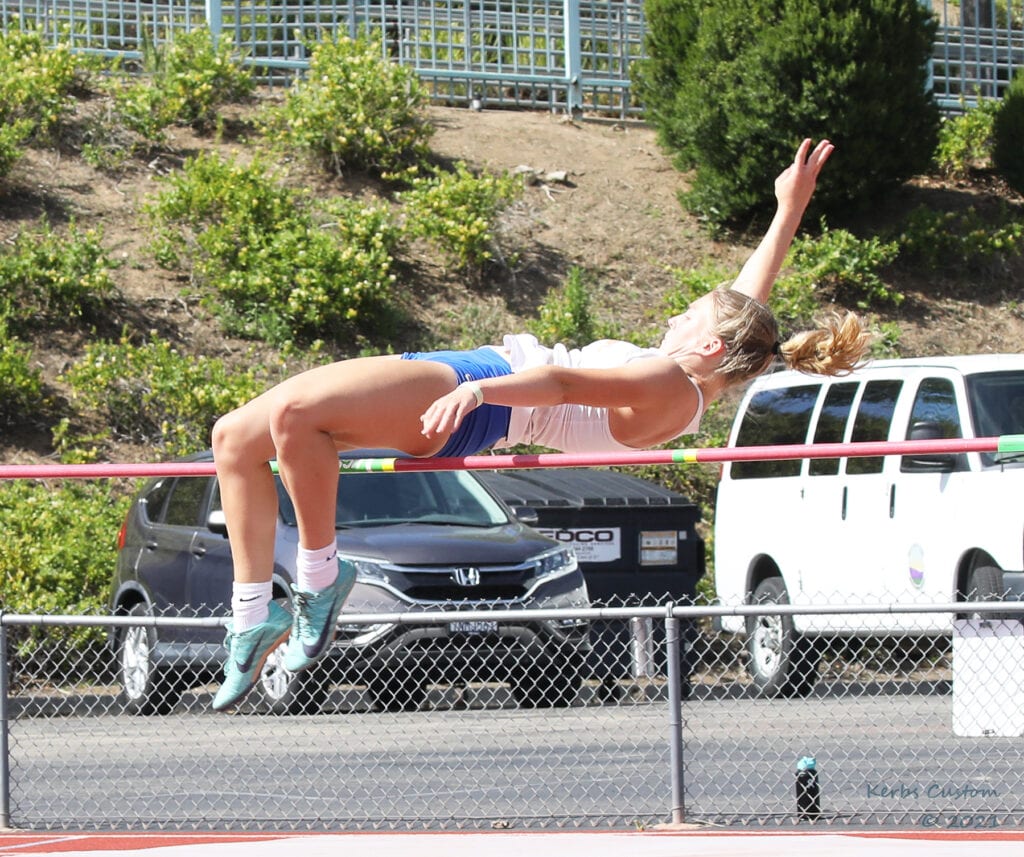 Stellar Soccer – Three local clubs excelled in the postseason by reaching championship games with two of them capturing coveted titles. And the one that didn’t came excruciatingly close to doing so.

Coached by the accomplished John Burson, San Pasqual (13-3-3) met No. 1 seed Cathedral Catholic for the SD Section Open Division title last Friday at Mission Bay High. After a 0-0 tie during regulation time failed to determine a winner, the contest went to OT penalty kicks where the Dons finally emerged victorious thanks to a 4-1 margin. Cathedral goalie Brady Bachman made a pair of scintillating saves in the extra session that were crucial, with only SP captain Liam Dugnian being able to solve him.

The fact that the Golden Eagles were even able to make it to OT was quite remarkable since they played most of the second half down a man after Victor Valle was issued a second yellow card when he grabbed the jersey of a Don threatening to get free on a breakaway.

Like his counterpart Bachman, SP goalie Tanner Wrzeski was a standout, particularly when his team was shorthanded and he produced some notable stops including a leaping effort that denied a rocket off the foot of Cathedral’s Joe Montali.

Buoyed by an inspiring turnaround during a season that saw them go winless in their first eight games, the girls of Orange Glen captured the Division V championship by downing top-seeded Holtville 3-2 in the final held at Eastlake High. Senior forward Valeria Alcantar led the way with a brace of goals while junior Tanya Gonzalez provided the difference-maker with a second-half tally.

The Patriots entered the playoffs as a No. 7 seed but got cooking down the stretch by going undefeated in their last six games—which included playoff shutouts of Liberty Charter (4-0) and Guajome Park Academy (5-0). The Pats also copped a Division V crown in 2016.

In a campaign marked by tremendous achievements, the Classical girls put a bow on all that had gone on before by securing the Division IV championship last Saturday. With their 5-0 conquest of top seed Southwest SD in the title tilt, the Caimans ran their seasonal record to a lusty 22-3, won their 17th straight game and pitched their 15th shutout. Rarely are seasons more spectacular. 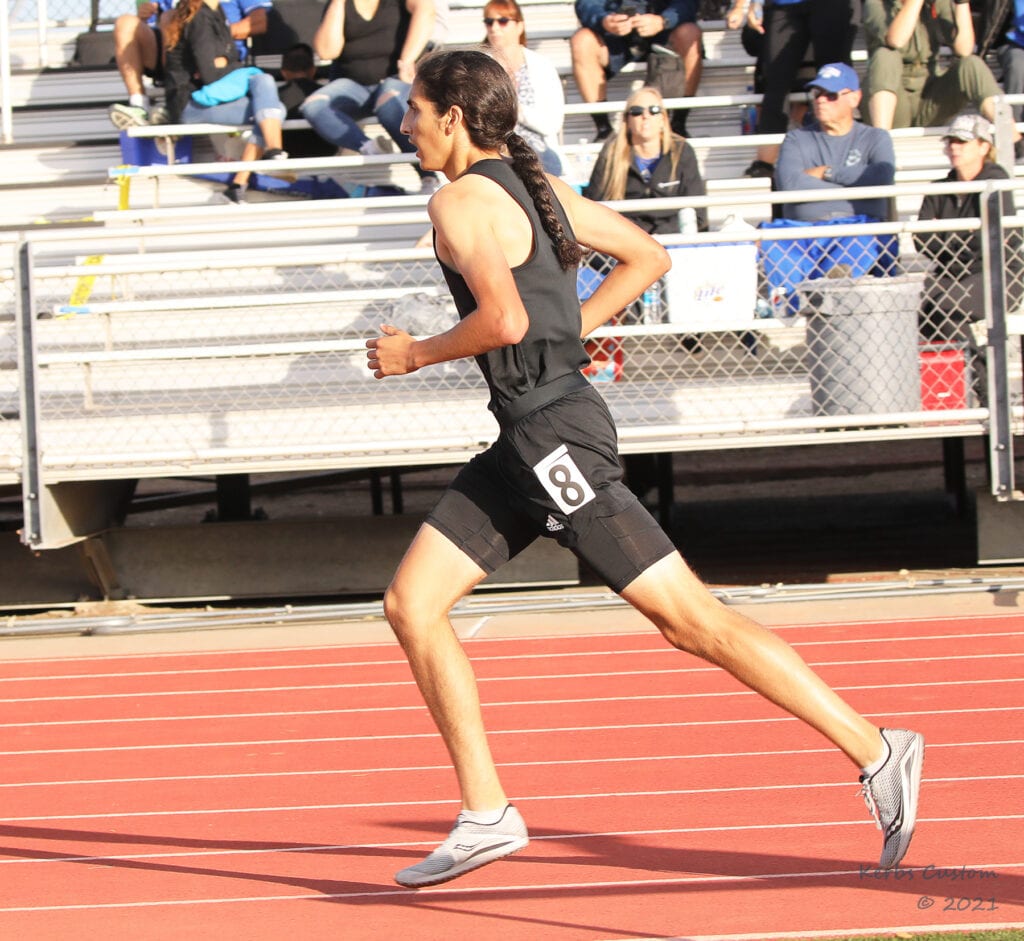 Escondido junior Damian Bonds strode his way to a nice third-place finish in the 800 meters. Photos by Lenny Kerbs.

For the Esco boys, Abraham Perez was a shining light as his personal best leap of 21-10.50 in the long jump proved to be a distance no one in a strong field could eclipse.

Meanwhile, fleet sophomore Jody Emanuel established a personal record of 11.04a in the 100 meters that netted him a third-place finish. Junior Damian Bonds earned an admirable third spot with a clocking of 2:09.77a in the 800 meters, his all-time best time.

As for the Cougar girls, senior Trinity Walger came on strong with splendid second-place results in both the 200 and 400 meters which included a best ever 58.82a in the latter event.

Turning to SP, Oskari Rantamaki was the boys headliner by not only racing to victory in the 110m and 300m hurdles but by establishing personal records in both events.

Senior Quinn Carter was another Golden Eagle who drew acclaim with a triumph in the triple jump (43-03.50) and third-place finishes in the long (20-11.75) and high jumps. Carter’s marks in the triple and long surpassed anything he had ever done before.

On SP’s distaff side, junior Anna Exline was a picture of determination and stamina as she parlayed her personal best time of 12:04.14 into a memorable win in the 3200 meters. Rasha Badrani was also a victor in the 300m hurdles, where her personal record of 47.14a proved too much for her opponents.

In addition, nifty second-place efforts were authored by Diya Patel with a 98-10 heave in the discus and senior Gabriella Baumer, who hopped, skipped and jumped her way to a distance of 32-03.50 in the triple. Incidentally, both performances established personal bests.

We save the very best for last —which features the exploits of the superlative Elise Miller. Expected to pull off a quadruple, the wondrous senior did exactly that which only served to add to her already shimmering resume. When it comes to consistency, clutch performances and amazing versatility, Miller has few equals. Not only did she set all-time personal marks in the 110 hurdles (14.39a) and the long jump (19-04.00) she also reached the magical 41-foot mark in the triple jump. And just for good measure she tossed in a high jump win. Simply put, Miller has become a living legend at SP.