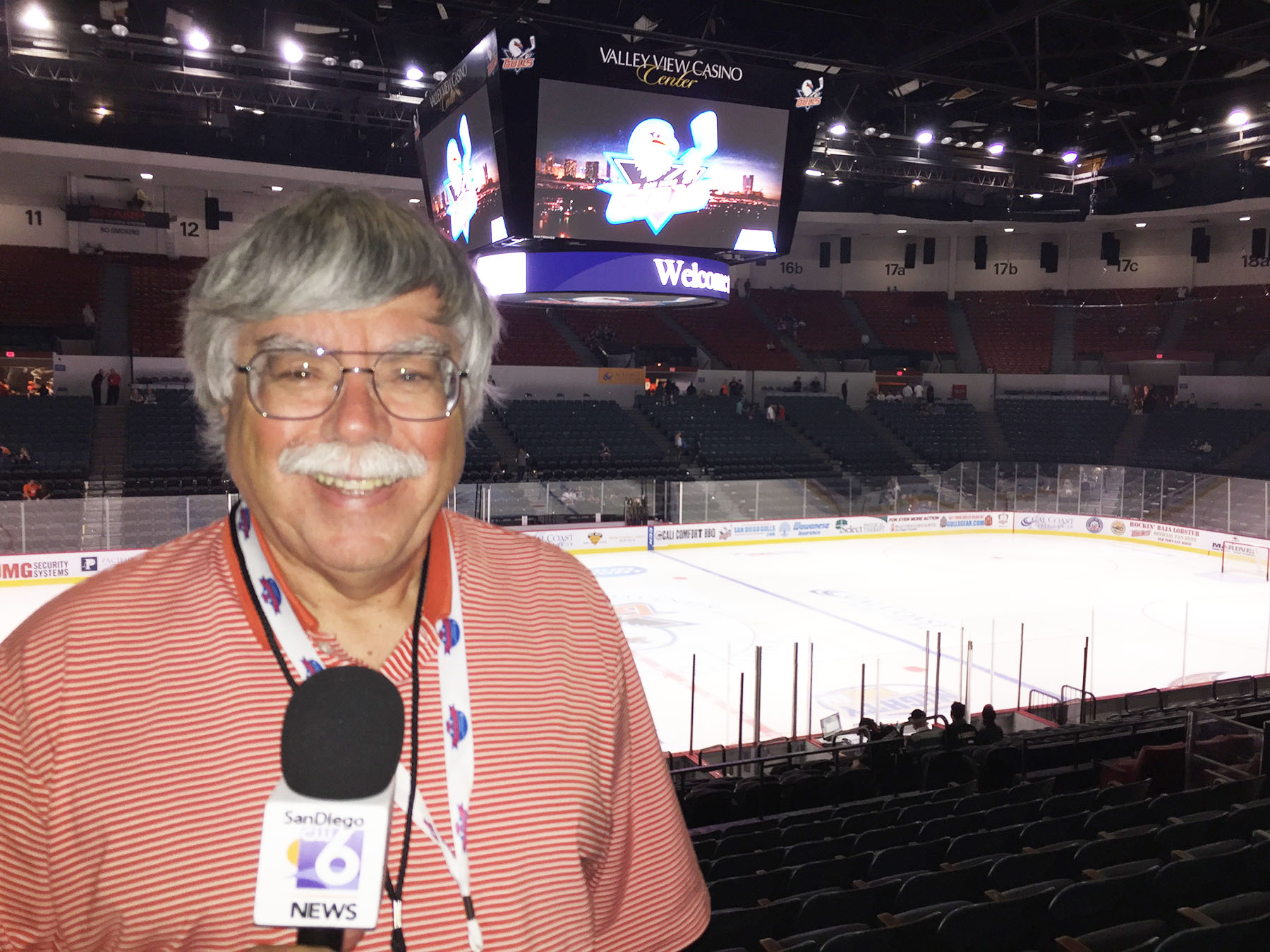 Hamilton is at home covering just about any type of sporting event, including a personal favorite of his, hockey.

This is the concluding part of a story on a one-of-a-kind sportscaster. (part 1)

In all, Lee Hamilton was to have a remarkable 28-year radio run in the San Diego market, with the bulk of that time having been spent at the Mighty 690. Though there was no denying that Hacksaw – who held down the fort during the all-important afternoon drive – was the straw that stirred the drink, the station was also the undeniable beneficiary of other notable talent.

Among those who carved out their own unique niche were an up-and-coming Jim Rome, the entertaining duo of Steve Hartman and Chet Forte (better known as the “Loose Cannons,”) the professional combination of Steve Mason and John Ireland as well as the homespun and down-to-earth John “Coach” Kentera, who made covering the prep landscape a top priority. And when Forte unexpectedly passed away, “Philly” Billy Werndl came onboard and made a definite mark as Hartman’s new sidekick. “That was just a really good group,” praises Hamilton. “Everybody offered something different and that’s what made things so special. It was just great being a part of that environment. We all helped to make it work.”

And after his local radio gigs, Hamilton felt fortunate to find another comfortable landing spot at XETV Channel 6 where his creative juices were allowed to flow freely during a three-year stint. Whether he was functioning as a sports anchor, doing a heavy load of outside reporting or making appearances on other shows, Hamilton became a familiar sight on the television screen. Given great latitude to cover even the most controversial issues, he flourished in this stimulating setting. “I had so much fun there and did I ever learn a lot,” he says with a smile. “It was really neat being somewhere where I wrote, created and anchored and they basically let me do whatever I wanted.”

The treasured memories he has amassed over the years, whether they concern a particular personality, incident or game remain fresh in his mind. When it comes to the players that he remembers most, it’s hardly surprising that Padre legend Tony Gwynn ranks at the top of the list. “He was just the greatest guy to deal with because he got it,” lauds Hamilton. “He was always respectful to the media. It was so sad when he died. I can still hear his voice shouting across the clubhouse, ‘Hey, Hacksaw!’ ”

One-time San Diego Charger General Manager Bobby Beathard, who later this month will enter pro football’s Hall of Fame, was another who left an impression on the ‘Saw. “An eclectic, off-beat guy who was not only cool but someone who was genuinely nice and very good at what he did,” Lee recalls.

And then there was Bobby “Boss” Ross, the only Bolt coach to ever escort the locals to a Super Bowl berth: “A man of values and integrity,” Hamilton states. “He was a special human being but when needed, he could be as tough as nails.”

As the voice of the Chargers during their Cinderella run to football’s ultimate contest, there were games that proved to be particularly unforgettable for Hamilton. For example, there was a memorable tilt that took place in the Great Northwest. When confronted with a testing third-down situation and backed up against his own goal line, Bolt quarterback Stan Humphries deftly beat a blitz and drilled wideout Tony Martin on a crossing pattern that went for a stunning 99-yard transcontinental score that not only deflated an aroused Seattle home crowd but ignited a huge road win.

Then there was the time in Kansas City when a brouhaha erupted right before halftime and involved such prominent actors as Ross, Humphries and offensive lineman Stan Brock —squaring off in one form or another – against Chief notables Marty Schottenheimer, Derrick Thomas and Neil Smith. Not only enraged but highly motivated by what had occurred, the Bolts emerged from the locker room totally galvanized and went on to bury the Chiefs in the final half.

And of course, the piece de resistance came in the playoffs against Pittsburgh. There had been reports in a local newspaper that the Steelers had already made arrangements for a celebratory postgame party – the inference being that the hosts were exceedingly confident of victory and taking the outcome for granted. Well, Ross got wind of the story and effectively used it as ammunition, pointing out to his club this blatant sign of disrespect. When the Chargers then sprang what turned out to be a huge upset, it was the Bolts who owned the last word and were left to do the boogieing.

Hamilton fondly reminisces about the immediate aftermath of that signature win, undeniably one of the most significant in franchise history. A crowd of over 60,000 Charger fans ignored rainy conditions and jammed then Jack Murphy Stadium to honor the new AFC champions. “What a night that was,” muses Hacksaw. “There was thunder in the crowd and electricity in the air.”

Among other highlights that ‘Saw has experienced include living a lifelong dream of calling a hockey game from the famed gondola at Maple Leaf Gardens, covering ASU’s notable Rose Bowl victory over Bo Schembechler’s Wolverines and watching San Diego best the vaunted Dallas Cowboys in the first game he ever worked as voice of the Chargers.

But because sports is in many ways a microcosm of life, it cannot separate itself from harsh reality and tragedy. As such, Hamilton has been deeply affected when his duties called for him to personally cover gut-wrenching events such as the plane crashes that involved the Marshall University football team and Yankee stalwart Thurman Munson. Hamilton has also become painfully aware about how tenuous one’s existence can be having interviewed NASCAR’s Neil Bonnett and Indy 500 driver Scott Brayton one day and then watching as they perished in a deadly crash the very next.

The fact that Hamilton would make sports his vocation seems almost predestined. Growing up as a youngster on Long Island, when he wasn’t out playing some sort of game, he was intently listening to the radio, being profoundly influenced by announcing heavyweights like Mel Allen, Red Barber, Russ Hodges and a newcomer to the scene, a veritable baseball poet in the personage of Vin Scully. With such shining examples to guide him, wisely fostering his own distinctive style and tapping into a limitless enthusiasm and passion, Hamilton steadily and successfully climbed the ladder and earned his rightful status as a broadcaster of genuine renown. Seven times he has been named Talk-Show Host of the Year by the Southern California Broadcasters Association.

Today, Hamilton keeps his formidable brand front and center with an informative website that can be found at leehacksawhamilton.com. Featuring written versions of his celebrated Hacksaw’s Headlines and One Man’s Opinion, Hamilton continues to cover the waterfront in a defining manner that clearly indicates he certainly hasn’t lost his fastball. In other words, Hacksaw can still bring it!

Predictably, he remains as plugged in and interested in the San Diego scene as ever. Despite the tremendous run that the Aztecs have been on with both their basketball and football programs, Hamilton is amazed that SDSU still isn’t registering higher on the community’s radar screen. He also speaks with intelligence and perspective about the current stadium dilemma and the upcoming ballot initiatives.

And of course, given his past connection and intimacy with the Chargers, he has some strong views on their dismaying departure. Hamilton considers the Bolts’ move north to be “shameful and an act of disloyalty.” Though not absolving the powerbrokers at City Hall of some responsibility, he nonetheless explains how factors such as the collapse of the global economy and San Diego’s near bankruptcy complicated the prospects for getting a stadium built.

But he saves his strongest criticism over the relocation fiasco for Owner Dean Spanos, whom ‘Saw faults for providing inept leadership, lacking in business acumen and letting loose a napalm-dropping mouthpiece like Mark Fabiani to front for the organization. Hamilton feels Mayor Kevin Faulkconer and Supervisor Ron Roberts among others made a good-faith effort to try to resolve the crisis but that the Chargers simply “refused to come to the table.” Hamilton believes it was long Spanos’s cynical intent to walk out in order to enhance the franchise’s net worth.

When candidly talking about potential missed opportunities, Hamilton reveals that years ago he was in line for the Anaheim Mighty Ducks play-by-play position but poor timing proved to be a major impediment since he had just signed on with the Seahawks. But in retrospect and given his extensive background in broadcasting hockey, ‘Saw wishes circumstances would have allowed him to do NHL puck just 96 miles up the Interstate from S.D.

And how about this for a thought? At one time, the idea was floated about pairing up the commanding Hamilton with good-guy Kentera as a potential team. Based on their contrasting styles and the depth of their sporting knowledge, that twosome might have made for some memorable radio had they indeed joined forces.

In a career that has known such lofty heights, that doesn’t mean that it’s been devoid of    disappointment. Due to a variety of reasons well beyond his control, Hamilton has seen a few gigs that he sincerely relished eventually wrested from him. “I’m not bitter,” he begins, “but it does hurt somewhat when you’ve created something very successful and then the next thing you know, it’s gone.”

The good news for Hamilton and his legion of fans is the he’s been recently exploring some potential on-air opportunities. Or as he laughingly says, he’s in the “process of interviewing his next boss.”

That’s music to the ears of those that have felt that the landscape has been sadly diminished and made intolerably barren since Hacksaw was a constant presence on the scene. Truth be told, ninety percent of those who today man a sports-talk mike couldn’t carry his jock in any sense of the word. They’re sorry pretenders, while Hacksaw remains the real deal.

He’s simply too good, too unique, too entertaining and too in-the-know not to be headlining a show sooner than later. The radio waves are simply crying out for a consummate talent like Hamilton to help rescue them from the mediocrity and drivel that currently exists.

He was once considered to be “The Franchise,” when it came to sports radio. If there is just one management type who possesses the foresight to mine the incredible resource that is Hacksaw, he definitely could be again.