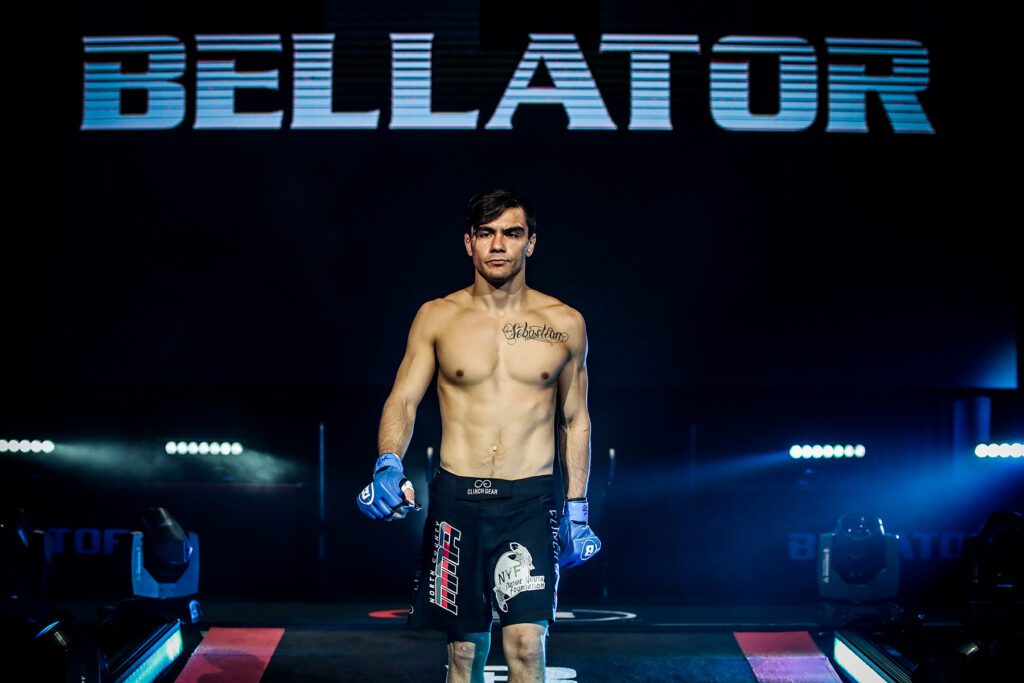 Escondido’s Johnny Soto has proved his worth during his two appearances under the Bellator banner. Photo courtesy of Bellator

If you had told Escondido’s Johnny “Phantom” Soto prior to his MMA featherweight fight with Adil “Glory Boy” Benjilany that he would execute eight takedowns during their match at Bellator 262, Soto would have relished his chances.

But because Soto wasn’t able to sufficiently capitalize on those opportunities when he was topside, the hometown product came up short in his bid for a fifth straight professional win. As a result, the 28-year-old Soto left the cage last Friday night at Connecticut’s Mohegan Sun Arena with a disappointing setback.

Because the match went the distance, the ultimate decision rested with the three judges in attendance, each of whom scored the bout 29-28—which earned for Benjilany a victory by unanimous decision. This writer agreed with that assessment by the exact same count.

There’s no getting around the fact that this was a deflating loss for Soto. Riding a nice winning streak and given another chance by Bellator to elevate his status, the “Phantom” was looking to keep his momentum percolating. And though he gave dogged effort and showed real grit in order to get in close, Soto simply didn’t do enough to negate Benjilany’s effective leg kicks and strikes.

Because of the contrasting styles of the two combatants, this was a matchup that had generated genuine interest and curiosity among insiders. Benjilany (6-3, 1 NC) is considered a formidable striker who is technically sound and can be a handful when operating from a standup position. As for Soto, grappling and trapping his opponents in the web of a smothering ground game are thought to be his strong suits.

Early on in the proceedings, things were trending in Soto’s direction. Not long into the first round, Soto pinned Benjilany up against the fence, impressively hoisted him upon his right shoulder and then delivered a forceful body slam, the noise of which seemed to reverberate throughout the arena. Though Benjilany later managed to engineer a couple of escapes, Soto got the better of the action during the initial five minutes, logging notable riding time and connecting on punches that included a nifty hook to the body and a solid left.

But in a narrative that would play out during the entirety of the match, Soto couldn’t inflict much damage while he was on top. Benjilany did a nice job of keeping the “Phantom” adequately occupied so that most of Soto’s attention was geared toward maintaining his leverage and not on meting out any impactful punishment.

The tenor of the match changed in round two. The “Glory Boy” came out confidently as he skillfully alternated between straight punches, overhands and kicks that went both high and low. That combination slowed down Soto’s rushes and made it tougher for the local product to get into close quarters. Another telling factor in this round was that Soto required nearly two minutes before he was able to author a late takedown that netted little and certainly depleted some of his reserve.

Because it was clear that the fighters had split the first two rounds, there was no mistaking that the final five minutes would determine the outcome. It was all on the line entering round three.

Benjilany started quickly by firing a couple of shots before Soto took him down. But Benjilany soon got to his feet and continued winging it, hitting Soto with a degree of frequency. At this stage, the accumulation of Benjilany’s overall attack was taking hold as Soto’s movement wasn’t as precise and he began carrying his hands a bit lower.

Nonetheless, the determined Soto dug down deep and delivered another takedown but he couldn’t gain enough of an advantage to hurt his opponent. Once more, Benjilany got away and snapped off some additional punches that found the mark. Predictably, this tussle had boiled down to Benjilany’s fighting versus Soto’s grappling and it was hard to argue that the former wasn’t achieving an edge in that tactical exchange.

Admirably, Soto manifested a huge heart as he gamely persisted until the very end with a final takedown that came just as the match was winding down. Though Soto’s work on the canvas didn’t result in the big dividends he was aiming for, it shouldn’t be underestimated that the Esco resident got Benjilany on his backside a significant number of times.

Moreover, Soto demonstrated his superb conditioning by not only withstanding Benjilany’s offensive arsenal but also having the stamina to continually come forward and press the action.

The final numbers give insight into why the judges were swayed in Benjilany’s favor. The 30-year-old Moroccan outperformed Soto when it came to strikes (64 to 28), punches (41-20) and kicks (19-3) landed. That apparently was enough to offset Soto’s complete superiority in takedowns where he totaled a noteworthy eight while Benjilany was blanked, never once taking Soto off his feet.

When the decision was announced, a ballcap donning Soto looked surprised, his mouth agape. Having invested such a yeomanlike effort into this testing battle, perhaps he found it hard to accept defeat.

In the aftermath, one announcer was heard to say, “These are two fighters that you want to see again.” Indeed, each gave a good account of himself—not only as an athlete but as a willing warrior as well.

Nonetheless, it would be foolhardy to think that this defeat won’t gnaw at Soto. Having sprung a big upset in May over prohibitive favorite Weber Almeida on a previous Bellator card, Soto (4-2) was nicely positioned to create even more buzz about his promising career. There is no sugarcoating the reality that the Benjilany fight was an opportunity lost.

However, Soto simply has too much going for him – from his physical attributes to his mental makeup – not to be highly motivated moving forward. If analyzed from a proper perspective whereby valuable lessons can be gleaned, then the Benjilany loss should be viewed merely as a temporary speed bump and hardly a roadblock to Soto’s future success.

Those that know him best are convinced that the “Phantom” won’t be deterred from rebounding in a major way and coming back more committed than ever before. Because in so many ways, Soto’s brightest days as a mixed martial artist could still be beckoning.