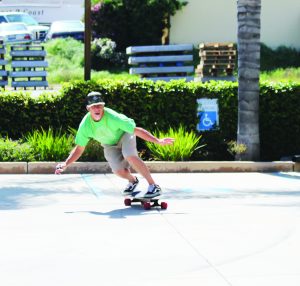 The “Electric Gravity” plugs into the wall with a rechargeable lithium battery and will get up to nine miles at 11 mph on a charge.

Gravity Skateboards is a privately-owned company that has been building skateboards since 1994 when founder Michael Bream created the 47 inch Hyper-Carve board, which became the flagship model and, in the words of sales manager Kevin Kennedy, a longtime employee, “took off like wildfire.”

At the time “vert skating,” i.e. riding a skateboard up a nearly vertical incline, in other words, extreme skating, was taking off. “This left a large demographic losing interest,” said Kennedy. “Michael created the Hyper-Carve to offer a smooth ride for someone who just wanted to roll around and still be athletic.”

The Hyper-Carve turned out to be a great cross-trainer for surfing and snowboarding, which then opened the doors for a lot of people who might not have skateboarded before—to give it a try. 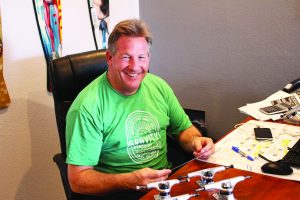 Dave Andrecht, who as much as anyone, owns up to being the guy in charge at Gravity Skateboards.

The company builds longboards ranging in length from 33 to 55 inches with names like Arrogant Bastard (which makes them perfect to be situated in the same city as Stone Brewing) Spoon Nose, Pineapple Express, South Pacific, Wingman, and Hyper-Carve. Some models are also named after the riders who design them. The company also sells decks, which is the board, wheels, the trucks, which are used to attach the wheels to the board, and clothing and accessories featuring the company’s brand graphics.

When Bream developed the Hyper-Carve, “That opened the doors to different avenues to ride freestyle cruising and carving.”

For skateboard enthusiasts, “cruising” is taking your longboard to school, to the mall, or to the burger joint with some pals. Carving, on the other hand, is shifting body weight to the heel edge or toe edge of the foot in order to make an “S” pattern with the board. Skateboarders use this maneuver to have fun and to control speed.

The company began to manufacture specialty boards, which like different kinds of athletic shoes, are intended for different skateboarding disciplines.

“Now the demand is shifting,” said Kennedy. “After years of steady growth customers are looking for something new and different.” 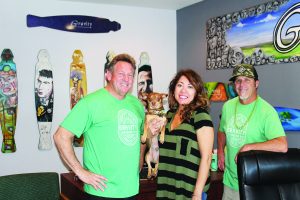 For that new demographic, Gravity is rolling out an electric skateboard. “We have a created a state-of-the-art electric skateboard which is going to change the game. We are bringing it into the market with a price that will be affordable for the average active individual.”  An individual who wouldn’t necessarily

balk at spending $1,000 or so for skiing or golf equipment, but wouldn’t necessarily want to spend the $1,300-$2,000 that it now costs to get into an electric skateboard.

The “Electric Gravity” plugs into the wall with a rechargeable lithium battery and will get up to nine miles at 11 mph on a charge. “That’s faster than you think!” says Kennedy with a grin.

The new board, unlike other electric boards, lends itself to carving and is very maneuverable, says Kennedy.

Bream recently sold the company to a new “behind the scenes” owner, although the people left to run the company have been in the industry for years.

Dave Andrecht, who is the “front of the scenes” manager, says that the “buzz on the Electric Gravity is already out there.”

The boards are made from Canadian maple from a renewable forest. “We’re not chopping down old growth forests,” says Kennedy. 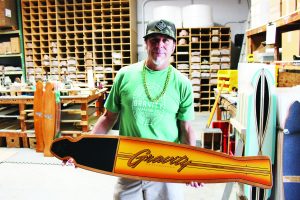 The company moved its operations to Escondido from Solana Beach so it could increase its warehouse space in time for the release of the new skateboard, which they expect will need the additional space by this summer when the new product should be available.