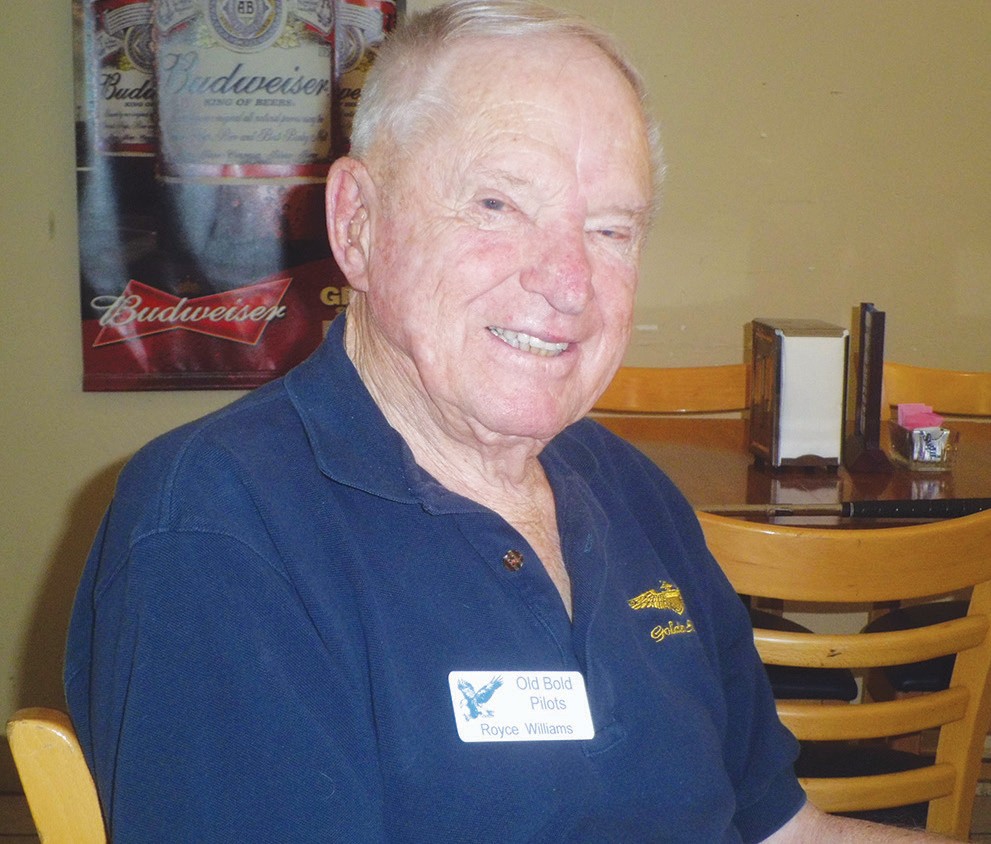 Retired Navy Capt. and flyer Royce Williams has never been recognized for shooting down four enemy MiGs on November 18, 1952.

There’s an old saying that “there are bold pilots and there are old pilots, but no old, bold pilots.” Royce Williams, retired captain, U.S. Navy—and who is 90— kind of puts the lie to that saying.

Williams wears a badge that says, “bold pilot” and the fact that in November 18, 1952 he shot down four MiG fighters in a dogfight where he was outnumbered seven to one proves that he is pretty bold.

The Hidden Meadows resident was never officially recognized for the feat because, although it was witnessed on RADAR, the U.S. government wanted to keep what was then top-secret technology from being known by the Soviets. So, an American pilot shot down four Russian airplanes, dropping them into the frigid waters off North Korea, where they presumably died. It never became an international incident because the Russians didn’t want to admit that they had lost the pilots and the Americans didn’t want to admit to having the advanced radar. To this day Williams carries a card with him that has the names of the Russians who died in that dual in the sky.

The best Lt. Williams got was a Silver Star in recognition of shooting down one enemy aircraft. His exploits have been celebrated by Flight Journal (see photo of the magazine cover about his feat) and other aviation magazines. The U.S. military has yet to officially recognize what was probably the best single fighting performance by an American pilot in the modern age.

After the fall of the Iron Curtain in 1988 Russians confirmed that they sent out seven MiGs on that day and only three returned safely.

The battle took all of 35 minutes, and when he flew his Grumman F9FS Panther back to the Oriskany, the Essex class aircraft carrier he had taken off from, it was so riddled with more than 263 holes and perforations made from large caliber machine gun bullets that they pushed the airplane 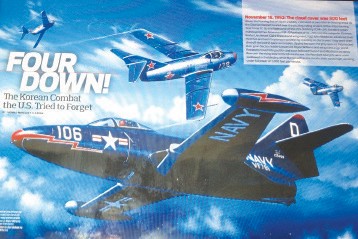 An artist’s rendering of the Nov. 18, 1952 dogfight between Royce Williams and seven Russian aircraft. Artwork Courtesy of Flight Journal.

off the flight deck and into the ocean. Williams was himself unhurt.

The Oriskany was part of a task force that included three carriers and the battleship Missouri, operating off of North Korea. The Missouri was the flagship for Vice Admiral J. J. Clark.

He would fly a total of 220 combat missions in his career, but nothing so harrowing as this one.

His friend and golfing buddy Charlie Wittwer is outraged that Williams’s actions have gone uncelebrated. “I saw an injustice and I can’t sit back,” says Wittwer. “He’s done some great things. He ought to be recognized for it before he’s gone.”

Williams feels that he did nothing particularly heroic that day—especially since he had no choice. “I was on combat air patrol (CAP). When the Navy puts you on CAP you have no choice but to defend the fleet.”

“The most dangerous thing about it from my perspective was bringing a crippled plane back and landing it.”

Shortly after the battle, Williams was flown to 8th Army Headquarters in Seoul, where he was able to rub shoulders with the brass, including President Elect Dwight Eisenhower.

“I was able to meet all of these famous WWII guys,” he recalls. “President Eisenhower took me by the arm and placed me in a chair and said that we ought to celebrate with a glass of scotch.”

He told Ike that he drank bourbon and water.

Williams insisted that he drank bourbon.

“It’s some of the best scotch in the world,” said the general.

He stuck to his guns.

Eisenhower looked at his son, John, who was his aide, and growled, “John, get him a bourbon and water.”

“I drink scotch now,” said Williams. “I may be a slow learner, but I do learn.”

“He walks among us and he never says a word about this,” marvels Wittwer. “He is my idol and my hero and this country needs heroes. I want to see him get the recognition he deserves!”