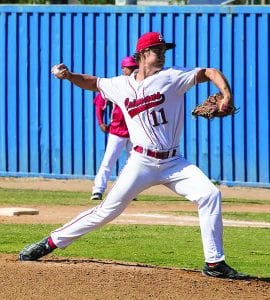 In many ways, Peterson was to turn the diamond at Orange Glen High into his own personal stage. Like any effective thespian, the gifted Peterson did a marvelous job of providing a suspenseful buildup as he tossed seven impressive innings of three-hit, seven strikeout, shutout ball. Thanks primarily to him, a mounting crescendo had been reached.

And then, when the timing was just right and the curtain needed to be brought down with a boffo finish, Peterson provided riveting theater by pulling a well-struck grounder between third and short that chased home the only run in a thoroughly entertaining 1-0 Caiman win over the visiting Tigers.

Currently hotter than Palm Springs pavement during summer, Classical (22-8) has now won 10 straight games and a rather amazing 17 out of its last 18 outings. As a result of their latest conquest, the No. 2 seeded Caimans have advanced to the fourth round in their half of the bracket where they will next meet Mission Vista, a lightly-regarded 11th seed that has stunned the experts thus far with three playoff victories.

And it’s a mighty fortunate thing for the Caimans that Peterson was at his very best because his Imperial counterpart, righty Alejandro Duarte, was damn near as good while limiting Classical to just six hits and a lone run.

The senior Peterson makes for an interesting visual on the hill as he has a distinctive knee bend to his windup and he likes to rock on the rubber. Though he has more than adequate pop on his fastball, it is his sharp and 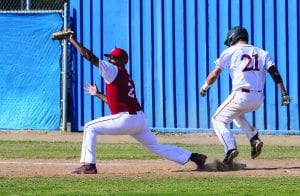 Caiman catcher Micah Anselmo is just nipped at first base as Imperial’s Manuel Rojas stretches for the throw.

late-breaking curve that is without question his money pitch. Time and time again in Friday’s game, he dropped it over for key strikes that fooled hitters and constantly had him ahead in the count. “For him to be successful against Imperial, we told him he’d have to be effective with that pitch,” said his coach Ron Sisler after the contest. “And he was fantastic with it. That was the best he’s been with the curve all season long.”

Pitching to contact, an approach that Sisler instills in every one of his deep stable of hurlers, Peterson was able to keep his number of deliveries down and was rarely in trouble. What’s more, when he needed to produce a big punch-out, he did, particularly in innings three through five.

Peterson’s only real moments of crisis occurred in the fourth inning after he had retired nine of the first 10 Imperial batters. Diminutive Jakob Trujillo got things going for the Tigers when he grounded a single into left field. Left-hand hitting Manuel Rojas then turned on a Peterson fastball and ripped it into right field for a slicing base hit. Next up was Kobby Lopez, who made decent contact but Peterson did a fine job of knocking down the comebacker before firing onto third for a huge force out. 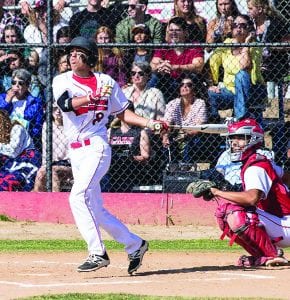 Outfielder Dane Kelsey’s afternoon included a base hit, walk and a stolen base.

It was here that the Classical pitcher produced one of his more telling strikeouts of the day when he pumped a letter-high fastball past a frozen Jonathan Reyes. Though a subsequent balk would move the runners up and position them at second and third, Peterson proved clutch when he induced Duarte to ground harmlessly to first baseman Ian Peters to end the threat.

Meanwhile, the lanky Duarte, who appears to be mostly arms and legs, was also doing his part by keeping the Caimans at bay. Aided by a sneaky heater and effective off-speed stuff, the youthful looking junior allowed only a rocketed single off the bat of athletic catcher Micah Anselmo through the first three frames.

But in the bottom of the fourth, the Classical offense began to stir a bit. With one out, second baseman Trevor Blount chopped a bouncer over the mound and beat it out for an infield single. Peters then followed by coaxing a walk on a 3-2 pitch. One sensed the Caimans just might breakthrough at this juncture but this modest rally came to an abrupt end when Ethan Pillsbury rapped into a double play.

Having just extricated himself from a ticklish spot, the resourceful Duarte would have to do so again in the very next inning. Seeking to ignite his club, Caiman youngster Dane Kelsey yanked a liner into left field for a one-out single. Classical then caught a break when designated hitter Zack Jordan sent a grounder up the middle that looked to be playable. But the ball fortuitously kicked off the bag at second and caromed away—which gave the hosts a promising chance with two runners aboard and a pair of dangerous hitters coming to the plate.

But much to his credit, Duarte once more exhibited his grit as he bore down to retire Jake Mizel on a fly ball to center before getting Chase Martinez to hit a hopper to third that allowed infielder Chris Lopez to tag out an incoming Kelsey. This critical escape kept things scoreless and helped provide the backdrop for Peterson’s eventual heroics.

And those were to take place two innings later, in the bottom of the seventh. With one gone, sophomore center fielder Noah Dull brought the Classical crowd to its feet when he drilled a deep, slicing shot to right. Tiger outfielder Christian Zamudio, who earlier had made a sparkling catch on a sinking liner off the bat of Mizel, hustled over to his left but the ball kept tailing away. Now committed to having to go for it, Zamudio made a desperate, fully-extended dive but to no avail. The ball shot past him and began a lengthy roll towards the fence. 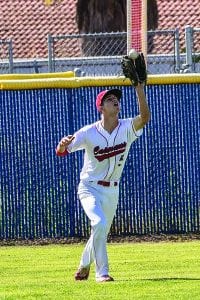 Sophomore Noah Dull, who would later deliver a game-changing triple, prepares to grab a fly ball in center field. Photos by Lenny Kerbs

With Zamudio laid out on the turf, that was the green light for the fleet-footed Dull to turn on the afterburners and boy, did he ever! Scooting around the basepaths with remarkable acceleration, Dull didn’t stop until he had belly-flopped into third with what turned out to be a game-changing triple.

Earlier in the season, the agile Dull had been leading off but at times he was a bit undisciplined and wasn’t executing quite like he should. Dropped down to the sixth spot in the order, Noah was encouraged by Sisler to put a heavy emphasis on making contact as well as hitting more ground balls because both those approaches would allow him to take maximum advantage of his enviable speed. Wisely, Dull heeded his coach’s advice and since then has raised his average significantly and has become a consistent, reliable and potent force with the bat. His critical  three-bagger was another indicator of his considerable growth as a hitter.

With Dull now just 90 feet away, representing the winning run, the Tigers elected to issue a free pass to Kelsey with the intent of setting up a potential double play.

It was at this decisive moment that Sisler called Z. Jordan back from the on-deck circle and inserted Peterson into the DH spot.  This maneuver was hardly unexpected since Peterson is an accomplished hitter and normally bats cleanup on the days that he’s not on the mound. “It was the perfect spot to use Jordan,” Sisler explained. “He’s a guy who will either hit the ball hard or get us the fly ball that we need. I was very confident that he’d come through for us.”

After Kelsey got a splendid jump and stole second without a throw, Imperial was thereby forced to bring its infield in tight, creating even more of a hitter’s delight for Peterson. And providing Peterson with any additional edge is tantamount to playing with fire. Not surprising, the Tigers were about to get burned.

In great part, it was Peterson’s steady arm that had brought his team to the precipice of a significant victory. But it would be his dangerous bat that would apply the coup de grace.

Sitting on a 1-1 pitch, Peterson made solid contact and pulled a sharp grounder into the hole between third and short that sent Dull home with  the game-winner. The super clutch hit set off a raucous celebration that culminated with a host of Caimans joyously jumping upon one another and forming a massive pile of white near the third-base line.

Not to be lost in Peterson’s gem, his pivotal RBI and Dull’s determinative triple was the fact that the Caimans were outstanding on the defensive side, flawlessly handling a total of 30 chances. Shortstop Martinez was particularly noteworthy with a pair of smooth stops and bullet-like throws from deep in the hole.

Given the lofty position that they currently occupy, it’s hard imagine that earlier in the season, Classical was scuffling with a 5-7 record and searching for some answers but then things began to come together and mesh. A huge turnaround occurred when the Caimans went on a nice run in winning the prestigious Lions Tournament (2A Division). “That’s where we really became a team,” points out Sisler. “That’s when we rediscovered what we could do and what we were capable of accomplishing.”

And since then, it’s basically been lights out. Sisler cites the vast hitting potential throughout his lineup, the team’s undeniable athleticism and the genuine chemistry that exists among the players as fundamental reasons for Classical’s sustained success. “I’ve got a lot of flexibility because so many of the guys can play multiple positions,” he shares. “ And with so many moving parts, we can do a lot of different things that work to our advantage. But most importantly, these guys really like and care about each other. They enjoy hanging out together and that’s something that has made a huge difference.”

A mantra and philosophy that the Caimans invoke before each and every game is to simply relish in the ride and “keep it loose.” They’ll have another opportunity to do just that on Tuesday when the versatile Martinez will get the call and try to pitch his club into the Division IV finals.

For now, all is good with the Caimans. Along with his mates, Jordan Peterson helped make it so.