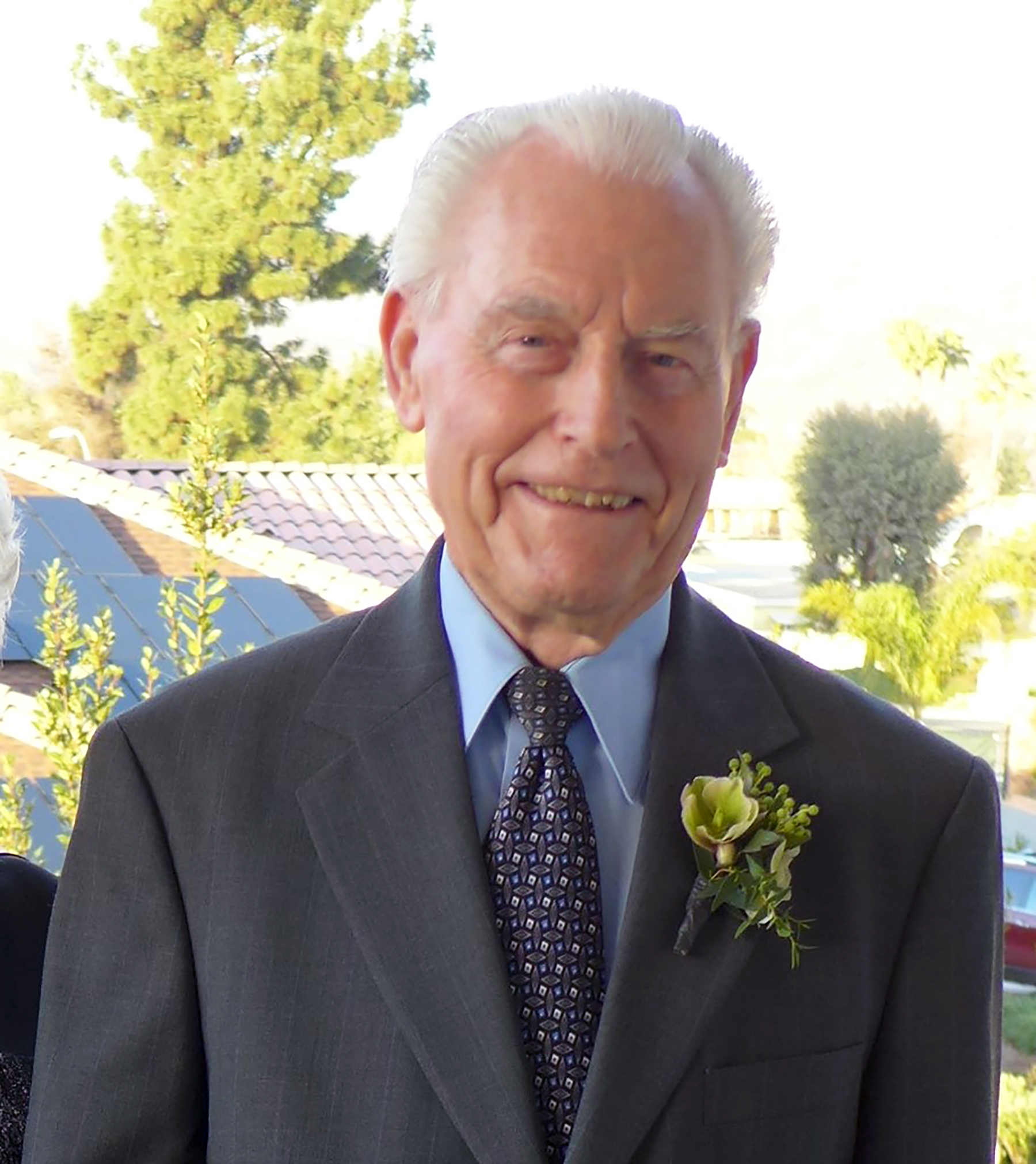 Pete de Jong of Escondido, California went to be with his Lord and Savior, Jesus Christ, on the morning of July 15, 2020 at the wonderful old age of 93 years!

Mr. de Jong was born on February 20, 1927 in the Leiden Hospital near Aarlanderveen, the Netherlands.  He was the second son of Arie & Maartje de Jong.  The family moved to the United States in 1949.  He followed in 1950 after finishing his tour of duty with the Dutch Army in Indonesia.  Together with the family, he began Hollandia Dairy on the corner of 17th Street and Hwy 395 in Escondido.  This 28 cow dairy with an attached Cash and Carry store was a big step up from the ten cow dairy he had been born on!

As co-owner Mr. de Jong spent many years in charge of public relations, marketing, and administration.  Though he retired in 2006, he continued attending board meetings well into his 92nd year, even after the business was sold to the next generation of de Jongs.

In 1956 Mr. de Jong met Rena Dragt at the Escondido Christian Reformed Church.  Though she was not sure he was her type, encouraged by her Mom and because he was a Christian, she decided to give him a chance.  They dated for a year and on January 30, 1957 they were married.  They took a three-month honeymoon across the United States and then on to Europe.  By the time they returned home, they were expecting their first child.  The rest of the children followed in rapid succession until 11 years later they had their family of seven children; enough to fill a station wagon and then some!  Many family trips were taken in that station wagon with all the supplies packed on top, including a 2-room tent, a cookstove and sleeping bags for all!  What an adventure those trips were!

Mr. de Jong was very involved with his church and community.  He was a member and Elder of the Escondido United Reformed Church and served with the Christian Business Men’s Committee, the Oceanside Servicemen’s Center and Wednesday Night Evangelism.  He was active on the boards of Calvin Christian School, San Diego Farm Bureau and Westminster Seminary.  But there was nothing he enjoyed more than sharing the story of salvation through Christ with those he met!

He is survived by his wife Rena to whom he was married for 63 years. He is also survived by his children Theo and Jeanne de Haan, Arie de Jong, Gerrit and Hinke de Jong, Gilbert and Marjie den Dulk, Peter and Ingrid de Jong, Mark and Elsie Bousema and Sandra de Jong.  Other survivors are his brothers and their wives, Teun and Hinke, John and Willie and Arie and Anneke de Jong and his sisters and their husbands Ellie and Wim Griffioen, Jet Gailey and Richard and Mary Westra, also sisters in law Shirley, Dita and Helia de Jong.

He leaves behind 34 grandchildren who loved him dearly and 41 great grandchildren with 4 more on the way. They all called him “Opa” and had so much fun with him!

He was preceded in death by his son, William de Jong and daughter in law Carol de Jong, his brothers Karel, Elso and Kees de Jong and a grandson and great-grandson.